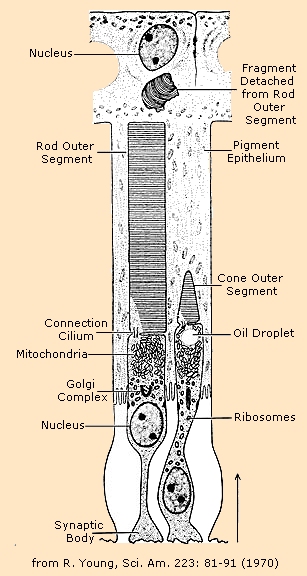 Comparison of a rod cell and cone cell (right).

A cone cell is a type of light-sensitive nerve cell found in the retinas of most vertebrates (though usually not those which live in dim light). Cones are concerned with the discrimination of color and of fine detail. In humans, they contains three types of of photosensitive pigment, compared to just one in rod cells. They also have a much faster response to light than do rods, so that they can perceive more rapid changes in stimuli.

An entire retina contains about 6 million cones – about one-twentieth the number of rods. However, cones are the only type of light-sensitive cell found in the primate fovea, where they are massively concentrated.

The cone-shaped outer segment of a cone cell, which is the light-sensitive part, consists largely of a stack of parallel unit membranes at right angles to the cell length. It develops embryologically from a cilium and retains its characteristic 9+2 pattern of fibrils.