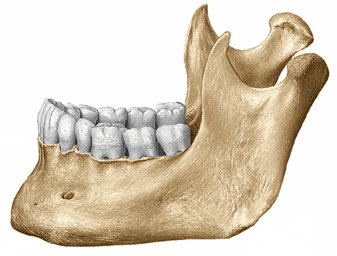 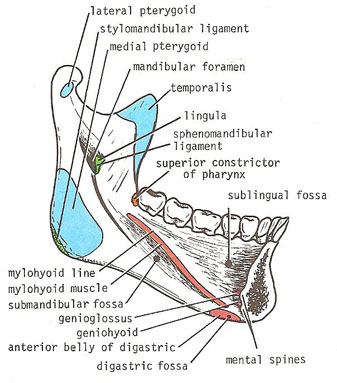 Medial aspect of the mandible (left side). 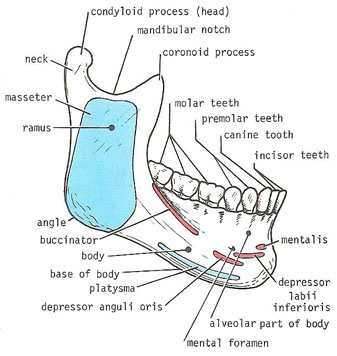 Lateral aspect of the mandible (right side).

The mandible is the lower jawbone (see jaw) of a human or other vertebrate skull; the upper jawbone is the maxilla. The mandible is the only moveable bone of the skull. It is U-shaped as seen from above and bears the lower teeth on its upper surface. It is connected to the base of the skull at the temporomandibular joints, which can be felt in the cheek just in front of the earlobe. Powerful muscles, arising from the temple on either side, attach to the mandible for movements needed in chewing and biting; other muscles allow side-to-side and downward movement. Through the late teens, the human mandible and lower face show a much greater degree of growth than the upper part of the face and head.

The body of the mandible, on its external surface in the midline, has a faint ridge indicating the line of fusion of the two halves during development at the symphysis menti. The mental foramen can be seen below the second premolar tooth; it transmits the terminal branches of the inferior alveolar nerve and vessels.

The upper part of the body of the mandible is called the alveolar part; in the adult it contains 16 sockets for the roots of the teeth.

The ramus of the mandible is vertically placed and has an anterior coronoid process and a posterior condyloid process, or head; the two processes are separated by the mandibular notch.

The coronoid process receives on its medial surface the attachment of the temporalis muscle. Below the condyloid process, or head, is a short neck.

The important muscles and ligaments that are attached to the mandible are shown in the lower two diagrams.

The mandible is composed of well condensed and well calcified bone, which makes it resistant to the process of organic breakdown. For this reason, there are many fossil mandibles as compared with other bones.

The term "mandible" is also used to describe one of the pair of mouth-parts of an insect, crustacean, or myriapod, which usually does most of the work of biting and crushing food.