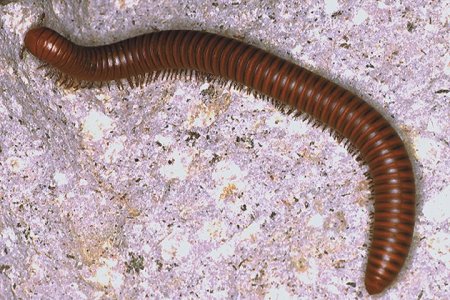 A myriapod ('many-legged') is any of various arthropods belonging to several closely related groups, having long segmented bodies, one pair of antennae, and at least nine pairs of legs. According to one system of classification, Myriapoda is a class of arthropods containing only centipedes (Chilopoda) and millipedes (Diplopoda). A significant point of distinction between these two groups is that whereas centipedes have a single pair of legs attached to each body segment, millipedes have two pairs (hence, the name diplopod).

According to another taxonomic system, the Myriapoda is a subphylum of the arthropods, including, as well as centipedes and millipedes, pauropods (Pauropoda) and symphilids (Symphyla).