Fig 1. Scolopendra morsitans, a large (up to 25 cm long) South American centipede that is a close relative of the Amazonian giant centipede (Scolopendra gigantea). 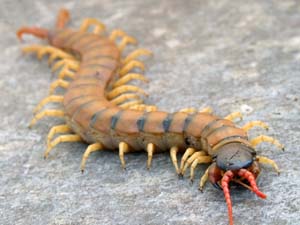 Fig 3. Scolopendra cingulata is an olive-green and orange centipede, common in southern Europe, that grows to about 10 cm (4 in); its bite is quite painful. In tropical countries there are much larger species of Scolopendra, the biggest of all being S. gigantea, which may be 30 cm (1 ft) long. These creatures have a very poisonous bite. The females brood their eggs and guard their young for several weeks after they hatch. 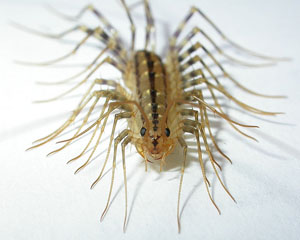 Fig 4. A long-legged centipede: the house centipede (Scutigera forceps), a member of this group, is found in warm countries all over the world. It is about 5 cm (2 in) long and has 15 pairs of very long legs. These centipedes can run extremely fast, and look rather like large, many-legged spiders. They are useful in that they prey on cockroaches and other insects. In tropical regions various other species are fond.

Fig 5. Slender centipedes: Geophilomorpha. The scientific name of this group means "earth-lovers," and its members are nearly all found burrowing in soil. They are very long and slender, with many short legs – often over a hundred pairs. Many of them give out a luminous fluid if they are irritated are injured. The North African Orya barbarica, shown here, may reach 17½ cm (7 in).

Centipedes are distinctive fast moving, predatory arthropods (phylum Arthropoda) that are widely distributed throughout the world. Together with with the millipedes and two smaller groups, the pauropodans and the symphylans, they make up the subphylum Myriapoda. Centipedes and millipedes are alike in having long bodies and many legs, but there the similarity ends. The most obvious difference between the two groups lies in the number of legs on each body segment – centipedes have one pair to each segment, millipedes two.

Centipedes tend to be fairly drab in color, the majority being some shade of brown and red, although some species have a strong, bright color. They vary greatly in length, from a few mm to as much as 30 cm (12 in) in the case of the Amazonian giant centipede.

Despite their name, centipedes can have many fewer or many more than 100 legs. The more common and familiar kinds have 15 or 20 pairs of legs, although some of the very long, slender kinds have 170–300 pairs; in all cases centipedes have an odd number of pairs of legs. They can move rapidly and some species can be very aggressive.

Centipedes are primarily nocturnal but there are some diurnal species. They spend their time in moist areas as their exoskeleton lacks a waxy cuticle and they can lose water rapidly through their skin and run the risk of drying out.

Centipedes have a flat, segmented body which is split into two parts: the head and the segmented trunk.

Centipedes have a round, flattened head and a pair of antennae. They have a pair of elongated mandibles and two pairs of maxillae, with the first pair of maxillae forming the lower lip and bearing short palps. The first pair of limbs stretch forward from the body and are known as maxillipeds. They end in sharp claws and include venom glands to help the centipede kill or paralyze its prey.

The trunk consists of 15 or more segments and each segment has a single pair of legs. The first segment has the maxillipeds and the final two segments are small and do not have legs. Each pair of legs are slightly longer than the pair in front of it, this is to ensure that they do not overlap and collide when the centipede is moving rapidly. The final segment has a telson and includes the openings of the reproductive organs.

Centipedes usually have a number of ocelli which are sometimes clustered together to form compound eyes, but some species do not have any eyes at all. Those that do have eyes don't appear to have a good sense of vision; it seems that they can only discern light and dark rather than being capable of true vision. In some species the final pair of legs act in a similar way to antennae, except they face backwards. The organs of Tömösvary are an unusual sense organ found only in some species of centipede. They are situated at the base of the antennae and are thought to be used in sensing vibrations or perhaps providing a sense of hearing.

Centipedes have a tracheal respiratory system and air is brought into the body through openings called spiracles that are situated on each segment of the body. They have digestive glands attached to their mouth parts and their digestive tract is a simple tube.

Like all arthropods, centipedes lack an internal skeleton and are covered in a hard exoskeleton that protects their soft internal organs and serves as an attachment point for their muscles.

Centipedes are found throughout the world and in a wide variety of terrestrial habitats from tropical rainforests to deserts. They require their micro-habitat to be moist and are often found in soil and leaf litter, under stones and deadwood, and inside logs.

In temperate areas centipedes breed during spring and summer, but in tropical areas they breed all year round. In most species of centipede reproduction occurs sexually but there are some species where only females occur and reproduction is through parthenogenesis.

Centipedes do not reproduce via direct copulation, instead the male produces a spermatophore for the female to take up. In some species the males do a courtship dance to encourage females to take up his spermatophore, but in other species they are just deposited and left for females to find.

Centipedes typically lay between 10 and 60 eggs and in some species the females cover the eggs and leave them, but others show some parental care. Some species stay with the eggs, guarding and cleaning them until they hatch and other stay with the young centipedes until they are ready to disperse. If a female is disturbed when she is guarding her eggs she will either abandon them or eat them. The time for the eggs to develop varies greatly from species to species, as does the time for a youngster to reach maturity.

Some species of centipede will only have 4–7 pairs of legs when they emerge from their eggs and as they grow and molt their exoskeleton they will develop more pairs of legs. They will undertake approximately eight molts before they reach sexually maturity. In other species all the pairs of legs are developed in the embryonic stages and they do not develop more legs as they molt.

Centipedes are relatively long lived compared to insects and some species can live for 5–6 years.


diet and methods of capturing prey

Centipedes are generalist predators and eat a wide variety of prey. They are mainly carnivorous with a diet that includes slugs, spiders, earthworms, insects, and other small animals. Some of the larger species have been known to eat reptiles, amphibians, small mammals, and birds. They use their antennae to seek out their prey then they capture and paralyze it with their venomous claws called maxillipeds.

Centipedes are preyed upon by a large variety of predators such as mongooses, rodents, salamanders, beetles, ants, birds, and snakes.

Centipedes are in the class Chilopoda and within this are arranged into five orders: Scutigeromorpha, Lithobiomorpha, Craterostigmomorpha, Scolopendromorpha, and Geophilomorpha. Within these orders are approximately 3,000 described species but it is believed there could be up to 8,000 species worldwide.