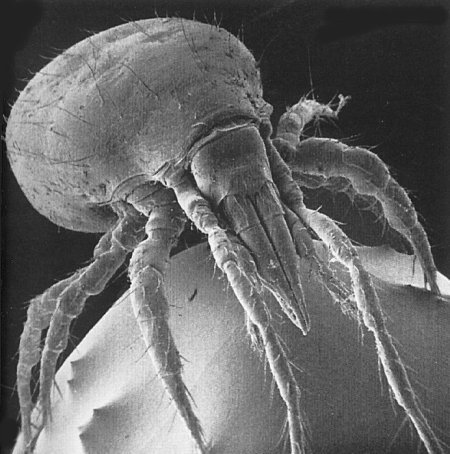 Pergamasus sp. A predatory mite of the type that preys on nematodes, springtails, other mites, and the larvae of insects. This mite is 1/25 of an inch (1 mm) long. Credit: Gerhard Eisenbeis and Wilfried Wichard. 1987. Atlas on the Biology of Soil Arthropods. Springer-Verlag, New York. p. 83.

An arthropod, in this case a centipede has its body encased in an exoskeleton which allows the development of jointed limbs. Body segments are covered by a rigid protein cuticle (1) and body flexibility is permitted by an overlapping membrane (2). The strength of the exoskeleton ensures that muscles (3) can be anchored to the inside of the cuticle. Groups of muscles (4) are used to move the legs. 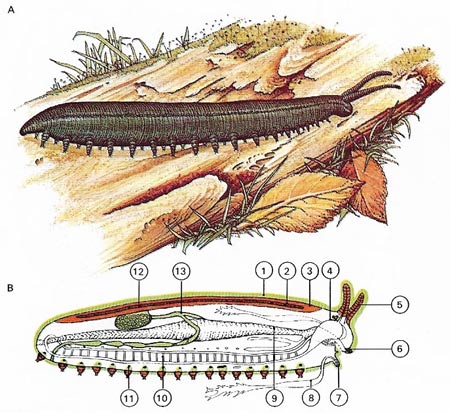 Velvet worms such as Peripatopsis (A) have features (B) typical of both arthropods (the cuticle (1), heart (2), hemocoel (3) and the antennae (5)) and annelid worms (eye (4) and excretory organs (11)). Slime glands (8) discharge through oral papillae (7). The mouth (6) has jaws (14) and leads to the gut (9). The underside of the head is shown (C). Paired nerve cords (10) coordinate movement. Female reproductive organs comprise ovaries (12) and uteri (13). Spiracles (respiratory openings) (15) and tracheae (16) of Peripatopsis(D) and insects (E) are only superficially similar. 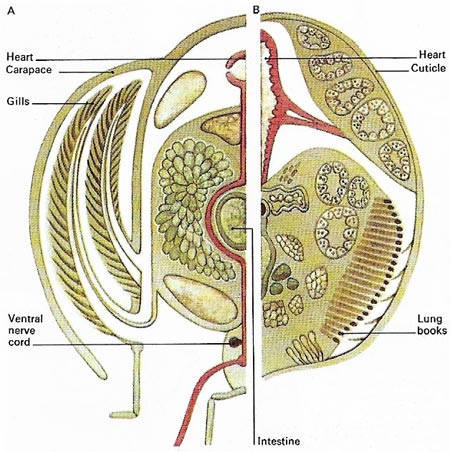 The breathing apparatus of arthropods is shown in the cross-sections through a water-dwelling lobster (A) and land-dwelling spider (B). In lobsters and other crustaceans a carapace (a plate of the skeleton) covers a gill chamber through which water circulates. Blood passing through the gills returns to the heart for pumping to the blood spaces in the body. Most spiders have pairs of lung books made up of leaves, each containing circulating blood and enclosed in a vestibule full of air. This opens to the outside by means of spiracles. As in crustaceans the blood returns to the heart after oxygenation.

An arthropod is any segmented invertebrate of the phylum Arthropoda, which includes five classes: Insecta (the insects), Arachnida (arachnids – spiders, scorpions, etc.), Crustaea (the crustaceans), Myriopoda (the myriapods), and Onychophora (a small group of terrestrial species found mainly in the Southern Hemisphere). More than a million species of arthropod are known, although according to some estimates there may be as many as 6 million species on Earth. More than 80 percent of all described species are arthropods, most of them insects.

Arthropods are protostomes related to annelids. Among extinct forms are the trilobites.

All arthropods have a hard outer skin of chitin that is attached to the muscular system on the inside, and is periodically shed during growth. The body is divided into segments, modified among different groups, with each segment originally carrying a pair of walking or swimming jointed legs. In some animals some of the legs have evolved into jaws, sucking organs, or weapons. Arthropods have well-developed digestive, circulatory, and nervous systems. Land forms use tracheae for respiration.

The cephalothorax is the fused head and thorax occurring in many arthropods, particularly crustaceans and arachnids.

The exoskeleton, which has contributed so greatly to the success of the arthropods, also imposes certain restrictions on them. It is excellent as a protective coating, but one-piece armor would prevent any movement. This problem was overcome by the simple solution of dividing the external skeleton into a number of separate plates. The plates are joined together by a thin, flexible membrane. The legs are also segmented and are composed of several tube-like elements also hinged by a flexible membrane.

The rigidity of the exoskeleton also complicates growth. The cuticle (outermost skin) can stretch between segments to a certain extent, but for any real overall increase in size the animal has to molt its outer covering and expand before the new skeleton hardens. During that time it is very vulnerable.

The renewal of the exoskeleton places heavy demands upon the animal. The new covering requires a great deal of material for its production and only marine arthropods such as crabs and lobsters with abundant food supplies and available minerals can grow to a large size.

Although excellent as a protective covering the exoskeleton is relatively heavy. With increase in size the exoskeleton becomes proportionately heavier and imposes a size limit on terrestrial arthropods and, more significantly, on flying species.


The success of arthropods

In spite of the problems inherent in the basic arthropod body plan the group has been remarkably successful within its limitations. One arthropod or another has managed to colonize every habitat invaded separately by all the other groups. The insects, of course, are among the most proficient of flying animals. Indeed, certain flies are, for their size, the fastest of all living things.

Many arthropods, of various groups, can both produce and perceive sounds. Some moths, for example, use ultrasound for confusing the hunting techniques of bats and possibly for other purposes. Other senses in arthropods are well developed, too. They can detect not only airborne vibrations but also those of the surface on which they are standing. The chemical senses of taste and small are highly developed and play and important role in communication between individuals of many species. The eyes are extremely well developed in many arthropods and vision can extend beyond man's visible spectrum into either the infrared or ultraviolet. The eyes of some insects, spiders, and crustaceans can detect the plane of polarization of light from the sky and use it in navigation.

Arthropod muscles are relatively efficient and very powerful. The claw of a large lobster, for example, can crush a man's wrist. The flight muscles of higher insects such as flies possess the remarkable ability of contracting extremely rapidly, allowing the wings to beat at up to 1,000 times a second.