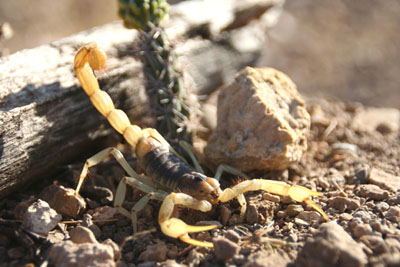 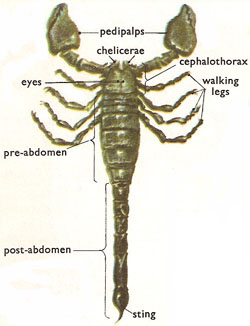 Scorpion seen from above.

Diagram of the principal internal organs of a scorpion. 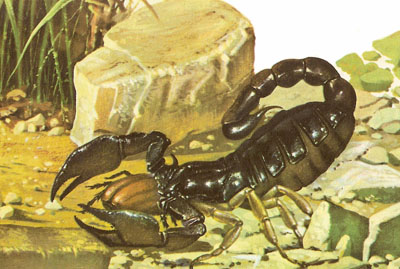 Scorpions are distinctive, predatory arthropods that have a fearsome reputation. They are extremely hardy and adaptable creatures, which first evolved hundreds of millions of years ago.

Scorpions vary enormously in length, from around 1 cm (0.4 in) to around 21 cm (8.3 in). They are colored mainly black, brown, tan, or red and may additionally have some markings. They are nocturnal creatures; during the day, they burrow under the soil to rest. Some species of scorpions can live for up to 25 years but a typical lifespan is 3 to 8 years.

All scorpions are venomous, the venom being used mainly to kill or paralyze prey. The venom is a mixture of compounds, each of which has a different effect depending on lifestyle and prey species. The venom is stored in glandular sacs and released in quantities regulated by the scorpion. Of all the known species of scorpion only 30–40 have venom that is strong enough to harm a person and all of these belong to the family Buthidae.

A scorpion's body is divided into two parts, the cephalothorax and the abdomen.

The cephalothorax comprises the carapace, a number of simple, small eyes, the mouth parts (including chelicerae), the pedipalps (the large front pincers), and four pairs of legs. Scorpions have two eyes on the top of their head and, depending on the species, 2–5 pairs of eyes along the front corners of the head. The position of the eyes depends on the hardness of the soil into which the scorpion burrows. The pedipalps are segmented, clawed appendages used in defense, for sensory purposes, and to catch prey.

The abdomen is made up of the mesosoma and the metasoma. The mesosoma consists of seven segments called somites, each of which is covered dorsally by sclerotosed plates; the 3rd to the 7th are also covered on their ventral side. Each segment, from the 3rd to the 7th, has a pair of spiracles which are openings to allow respiration. These openings can be slit-like, circular, oval, or elliptical. The metasoma is the scorpion's tail and consists of six segments. The first looks like the last section of the mesosoma and the last one has the anus and telson, or sting. The telson consists of the vesicle, which holds a pair of venom glands, and the venom injecting barb, known as the hypodermic aculeus.

Scorpions are widely distributed around the world, except in the Arctic and Antarctica, and can live at altitudes up to 5,000 m (16,400 ft). They live in a range of habitats including deserts, grasslands, forests, savannas, and temperate, sub-tropical, and tropical environments. Although they prefer temperatures between 20°C and 37°C (68°F–98.6°F) they can survive in both freezing temperatures and the high heat of the desert. Their hard exoskeletons makes them well-suited for conserving water. Some species live in damp places and the earliest scorpions – of Silurian times – were marine animals.

Scorpions have been introduced accidentally to England and New Zealand. The English colony, on the Isle of Sheppey, represents the northern most limit where scorpions are found in the wild.

Most species of scorpion reproduce sexually but some species have only female individuals and reproduce through parthenogenesis. Those species that reproduce sexually have a complex courtship and mating ritual that begins with each individual locating the other and determining that they are of the opposite sex and same species by the use of pheromones and vibrational communication. Once this has been determined, the male grasps the female's pedipalps and initiates a "dance." The male leads the female around until he finds a suitable location to deposit his spermatophore and then moves the female over it. This allows the spermatophore to enter the female, triggering the release of sperm and thus fertilizing the female. The courtship and mating process can last between 1 and 25 hr, depending on how long it takes the male to identify a suitable location for his spermatophore. Once the mating is complete the male and female go their separate ways.

Unlike the majority of arachnids, scorpions are viviparous and the mother gives birth to each offspring individually. The size of each litter depends on the species and environmental factors, but the average consists of around 8 youngsters. The young scorplings are carried around on their mother's back until they have undergone at least one molt. Before the first molt, the youngsters cannot survive without their mother's protection and deped upon her to regulate their moisture levels.

Scorpions are opportunistic predators and feed mainly on insects and small arthropods; however, larger species have been known to kill mice and small lizards. The scorpion's pincers have highly sensitive tactile hairs and the moment and insect touches them the scorpion captures it. Then, depending on the size of the scorpion's claws or the toxicity of its venom, it will crush the prey or inject it with neurotoxic venom. This paralyzes or kills the prey so the scorpion can eat it.

Scorpions can only digest food in liquid form and because of this they have an unusual way of eating. They use their chelicerae to pull small amounts of food from the prey into a pre-oral cavity. Digestive juices from the gut are then egested onto the food, and afterwards the digested food is sucked in by the scorpion. Any indigestible matter, such as fur or exoskeleton, is trapped in the pre-oral cavity and subsequently ejected.

Scorpions have a fairly inactive lifestyle, a low metabolic rate, and are able to consume a large amount of food in one go. This enables them to survive for long periods without feeding; indeed, some species can survive for 6–12 months between meals.

Predators of scorpions include birds, lizards, mice, rats, possums, centipedes, and meerkats. A scorpion's main forms of defense when attacked is its sting and claws, but its extremely tough exoskeleton also helps to protect it from predators.

All scorpions belong to the order Scorpiones and within this are grouped into 13 families. In turn, the families are composed of approximately 2,000 species and subspecies. Additionally, 111 extinct species of scorpions have been indentified.