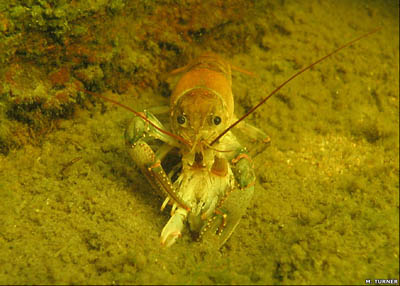 A crayfish in a Canadian lake. Image credit: M. Turner. 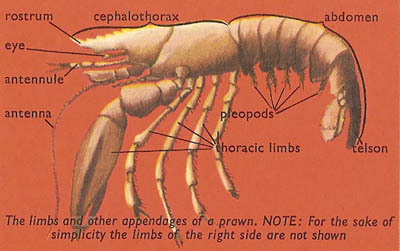 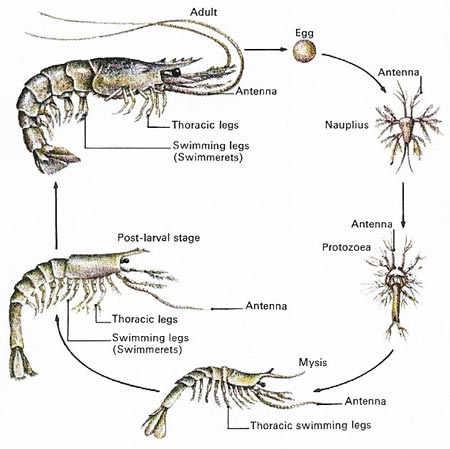 Most crustaceans hatch in a form quite different from that of their parents, passing through one or more larval stages before they become adult. The prawn Penaeus sp from the Gulf of Mexico shows the type of changes that may occur. The prawn spawns at depths down to 54 m (180 ft) and from the fertilized egg a nauplius, the basic crustacean larval form, emerges. This metamorphoses into the protozoea stage which, like the nauplius, swims with its antennae, but unlike it, it has both eyes and thoracic limbs. Thoracic limbs are used for swimming by the mysis larva. The post-larval stage and the adult both swim using abdominal appendages. 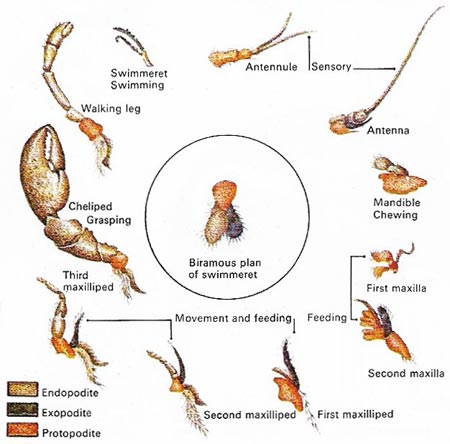 The segmented appendages of all crustaceans are built to the same basic plan. Those shown here are from the crayfish, a member of the order Decapoda. Although the appendages are very different along the animal's length , most are essentially two-branched or biramous. This arrangement is most clear in the swimmerets found beneath the abdomen. Variations on the theme are towards expanded or foliacious appendages such as the mandibles and maxillae to create a shape ideal for feeding or respiration. The walking legs are unbranched or uniramous. Structures with common origins like these are said to be homologous.

A crustacean is a member of the class Crustacea (from the Latin crustaceus, meaning "to have a shell or rind") within the phylum Arthropoda. Crustaceans are invertebrate, mainly aquatic, animals, which breathe using gills or through the general surface of the body. They have two pairs of antenna-like appendages in front of the mouth. The head and thorax are usually fused. Familiar examples of crustaceans are crabs, lobsters, shrimps, woodlice, and barnacles. They range in size from the giant Japanese spider crab (Macrocheira kaempferi), measuring 3–4 meters (10–13 feet) from caw tip to claw tip, to the copepods of the ocean plankton that may be only a mm (0.04 in) in diameter. About 25,000 species of Crustacea have been described.

Crustacean life-styles are as diverse as their body forms, although most live in water or in damp surroundings. The crabs and lobsters are largely scavengers, while Sacculina sp., which looks more like an undifferentiated sac of tissue than a crustacean, lives as a parasite within crabs. The mantis shrimps are active predators, the gribble (Limnria sp.) is a wood-borer and the cleaner shrimp (Stenopus sp.) feeds on external parasites that live on the bodies and in the mouths of fish. In return for its cleaning services the shrimp is granted immunity from potential predators.

Many crustaceans, including the sedentary barnacles, are filter-feeders, extracting food from the water in which they live by forcing a constant flow of it through their bodies.

The typical water-dwelling crustacean has a body covered with a hard shell or exoskeleton. This exoskeleton is composed of protein and chitin and hardened with lime salts. Also typical is the segmented body form, although the middle body section (the thorax) is often concealed by a large plate of skeleton (the carapace).

Essentially, each segment of the crustacean head and body carries a pair of legs or other appendages. These appendages have become modified to perform different functions. On the head, for example, the typical appendages are the first and second antennas, which are used as sensory receptors, and the mandibles and first and second maxillae, which are used for taking in and crushing food. The thorax bears three pairs of maxillipeds ("foot-jaws"), which are also employed in pushing food toward the mouth, the chelae or pincers for food capture, plus four pairs of walking legs. Under the abdomen are four pairs of swimmerets, used as their same suggests, in locomotion, but some of them may be modified for reproductive purposes. The crustacean's abdomen ends with a pair of appendages known as uropods. These, with the tip of the abdominal skeleton (the telson), form a tail fan that is used for steering during swimming or, when flicked vigorously down and under, shoots the animal backward defensively.

Most crustaceans breathe dissolved oxygen from their surrounding water either through gills or through most of the body surface; exceptions to the rule are the woodlice and the extreme parasitic forms. The gills of crabs and lobsters are thin-walled, leaf-like outgrowths that originate at or near the bases of the appendages of the thorax. They are enclosed in a chamber covered by a downgrowth of the carapace on each side and a current of water flows over them maintained by the beating of a paddle-like organ at the base of the second maxilla. In the woodlice and other similar crustaceans, however, the gills are modifications of appendages of the abdomen and in many of the smaller species of Crustacea the body surface itself acts as a gas-exchanger. But whatever their structure all crustacean gills must remain wet and this explains why most crustaceans are confined to watery habitats.

The sense organs of crustaceans, particularly the eyes and antennae, are efficient structures well adapted to the needs of these animals. The paired eyes of crabs and lobsters are borne on stalks and like those of insects they are compound eyes. But in copepods they are simple, single, and central – one copepod is in fact named Cyclops after the legendary Greek giant with the same characteristic. The two pairs of antennae are used to detect vibrations, maintain balance and also serve as sensors of "taste" and "smell."

Like other creatures that are encased in hard external skeletons, crustaceans can only increase in size if they undergo successive molts. Many crustaceans have the ability to regenerate lost parts such as claws and eyes, and often do this following the rejection of an injured part by self-amputation.

Most Crustacea develop from eggs laid by the female following mating and fertilization, although in some species, including water fleas, young can be produced by "virgin birth" or parthenogenesis. Larvae development is generally in several stages, but most species have a nauplius larva.


Crustaceans as a food source

Throughout the world, crustaceans play a major role in aquatic food webs, both freshwater and marine, as the food of larger animals. Freshwater ponds teem with microscopic Daphnia and Cyclops; sea-shores shelter millions of seahoppers beneath seaweed and other flotsam, and in the sea one particular group, known as krill, not only provide food for fish, squid, jellyfish, and the like but are the sustenance of some whales.

Branchiopoda (Greek, branchion = a fin; podos, genitive of pous = a foot). The branchiopods, of which there are five orders, live mostly in fresh water. Their limbs are flattened and leaf-like. Example: the water fleas.

Ostracoda (Greek, ostrakodes = testaceous, resembling a shell). The ostracods are minute clamlike crustaceans, whose body and limbs are completely enclosed in a hinged double-shell (bivalve). There are four orders.

Copepoda (Greek, kope = handle, oar; podos, genitive of pous = a foot). The copepods are abundant aquatic crustaceans (indeed, they are the most abundant animals on Earth), which are an important source of food (as plankton) in the sea. Many are parasitic. There are seven orders.

Mystacocarida (Greek, mystakos, genitive of mystax = upper lip, moustache; Latin, caridis, genitive of caris = a shrimp). There is one order.

Cirripedia (Latin, cirrus = a curl; pedis, genitive of pes = a foot). The cirripedes are completely sedentary aquatic crustaceans. Many are parasitic. Examples include the barnacles and acorn shells. There are four orders.

Malacostraca (Greek, malakos = soft; ostrakon = a shell). These are crustaceans whose bodies are composed of 19 somites, all of which generally have appendages. The thorax has eight parts, and the abdomen has six pairs of limbs. There are six super-orders: