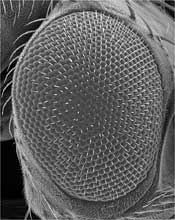 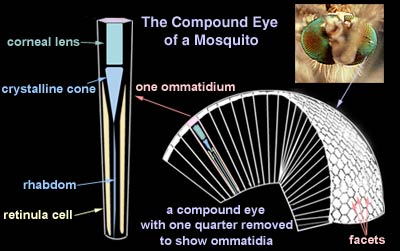 Fig 2. Structure of a compound eye.

A compound eye is the type of eye commonly found in arthropods, including many insects and crustaceans. A compound eye has a mesh-like appearance because it consists of hundreds or thousands of tiny lens-capped optical units called ommatidia. Each ommatidium has its own cornea, lens, and photoreceptor cells for distinguishing brightness and color. Individual ommatidia guide light through a lens and cone into a channel, known as a rhabdom, which contains light-sensitive cells. These are connected to optical nerve cells to produce the image. The ommatidia are separated from each other by varying degrees of pigment.

The ommatidia are packed side by side into bulges that create a wide field of view. As each unit is orientated in a slightly different direction, the honeycombed eye creates a mosaic image which, although poor at picking out detail, is excellent at detecting movement.

According to the structure of a compound eye, and the way pigment is distributed between the ommatidia, the eye can form either apposition images or superposition images. In the case of an apposition eye, each ommatidium focuses only rays that are almost parallel to its long axis, so that each forms an image of only a very small part of the visual field. The image of the whole results from a combination of these part images.

In the case of a superposition eye, the sensory cells of an ommatidium can pick up light from a large part of the visual field so that the image received may overlap those received by as many as 30 neighboring ommatidia. The superposition image thus gains in brightness but loses in sharpness compared with the apposition image.


How good are compound eyes?

Compared with single-aperture eyes, such as the human eye, compound eyes have poor resolution so they are not good at making out detail. On the other hand, compound eyes have a very large angle of view and the ability to detect fast movement and, in some cases, the polarization of light. Insects that can fly well, such as honey bees and flies, or that catch prey, such as dragonflies or preying mantis, have specialized zones of ommatidia. These zones are organized into a fovea area that gives acute vision. In the acute zone, the eye is flattened and the facets are larger, which allows more ommatidia to receive light from a spot and thereby achieve higher resolution.

Compound eyes generally allow only a short range of vision. For example, flies and mosquitoes can see only a few mm in front of them with any degree of resolution, although within this short range they can see detail that we could see only with a microscope.

Dragonflies have one of the most elaborate eyes of any insect, capable of pinpointing the motion of a small prey insect several meters away, even his while the dragonfly is traveling fast. Butterflies have color vision that is more enhanced than our own, enabling them to locate food from flowers. Honey bees can see in ultraviolet, which allows them to perceive patterns on nectar-laden flowers that are invisible to us. Many insects, including bees, can also detect polarized light, which they use in navigation.