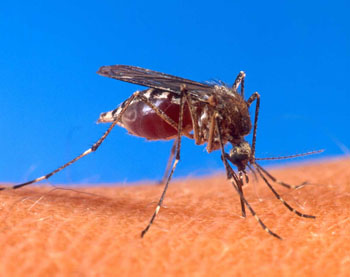 A mosquito sucking blood from its victim. 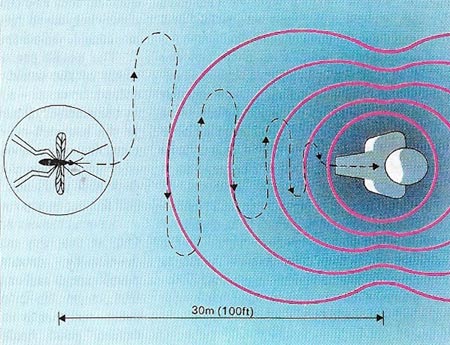 Mosquitoes find their victims in two stages. Carbon dioxide, which humans exhale, first sets them flying. If they then sense a current of warm, wet air, such as every person gives off, they home in on it; some people are more prone to mosquito bites than others because they are warmer and wetter. Repellants interfere with the accuracy of the mosquitoes' sensors.

A mosquito is a two-winged fly of the family Culcidae, with penetrating, sucking mouthparts. The females of many species feed on vertebrate blood, using their needle-like stylets to puncture a blood capillary, but usually only when about to lay eggs. The males, and the females at other times, feed on sugary liquids such as nectar.

Both the larvae and pupae are entirely aquatic, breathing through spiracles at the tip of the abdomen. In all but the Anopheline mosquitoes, the spiracles are at the tip of a tubular siphon, and the larva's body is suspended from this below the surface film.

Mosquitoes are involved in the transmission of many diseases in man including yellow fever, filariasis, and malaria.