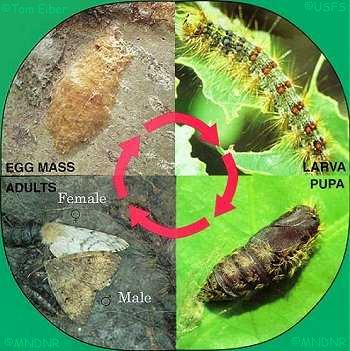 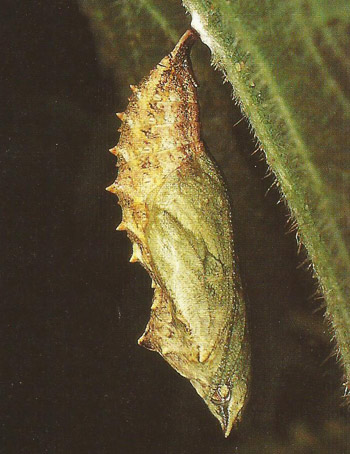 Pupa of the tortoiseshell butterfly Aglais urticae, attached to a stinging nettle leaf. Pupa formation takes about 3 hours, producing a characteristic, metallic gold sheen. As larvae, the caterpillars live socially, spinning a silken tent around a group, from behind which they feed on the nettle plant. At pupation they move off the food plant and suspend themselves, using a silk secretion, from posts, walls, sheds and tree trunks. In appearance the pupal stage is one of dormancy, but in reality substantial structural changes occur, resulting in the adult butterfly.

A pupa is an immature, non-feeding stage in the development of those insects which have a larva completely different in structure from the adult, and in which complete metamorphosis occurs. Most pupae consist of a tough protective outer casing, inside which the tissues of the insect undergo a drastic reorganization form the adult body: all but the nervous system changes.

Insects that undergo pupation the many species of butterfly, moth, and beetle and many kinds of fly. The pupa is often called chrysalis in butterflies and moths. It often acts as a resting or dormant stage, providing a resistant form in which the insect can survive severe weather or drought.

A cremaster is a collection of tiny hooks that protrude from the rear end of a moth or butterfly pupa. The pupa hangs by these hooks from a solid support.