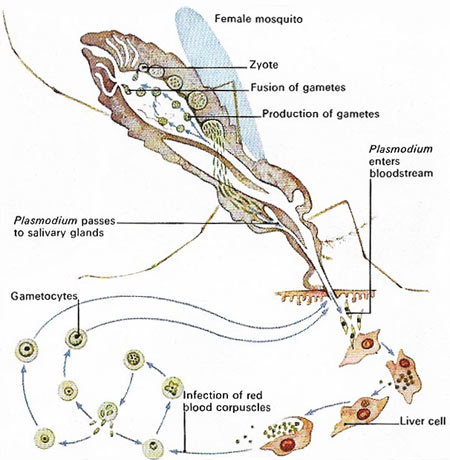 The malaria-producing protozoan Plasmodium vivax, when injected into the human bloodstream by an infected female Anopheles mosquito, rapidly invades the liver cells and multiplies. As cells rupture the plasmodia escape and infect other cells. In blood cells numerous cycles of multiplication, cell rupture and reinvasion occur before male and female sex cells (gametocytes) appear. If another mosquito takes up the infected cells gametocytes divide within its stomach, forming gametes. These fuse to produce zygotes, which release plasmodia to enter salivary glands and repeat the cycle.

Malaria is a tropical parasitic disease resulting from infection with one of four species of Plasmodium protozoa.

Transmitted by the Anopheles mosquito, malaria is characterized by fever and enlargement of the spleen. The parasite multiples in erythrocytes (red blood cells), causing their destruction. Attacks of fever, chills, and sweating typify the disease and occur as new generations of parasites develop in the blood, with the frequency of attacks related to the species involved.

The typical symptom of malaria is a violent fever lasting 6 to 8 hr, recurring every two or three days. The different species of Plasmodium cause two types of intermittent fever. A tertian fever has one day free of fever between paroxysms; a quartan fever has two. Anemia and enlargement of the spleen develop as the disease progresses.

The original antimalarial drug, quinine, has given way to synthetics such as chloroquine, although resistant strains of the main malaria parasite, P. falciparum, are spreading rapidly. With roughly 270 million people infected, malaria is one of the most widespread diseases, claiming two million lives a year, mostly in the tropics.

More than 100 different species of Plasmodium exist. They produce malaria in many types of animals and birds, as well as in humans.

Four species of Plasmodium commonly infect humans. Each one has a distinctive appearance under the microscope, and each one produces a somewhat different pattern of symptoms. Two or more species can live in the same area and infect a single person at the same time.

The malaria parasite typically is transmitted to people by mosquitoes belonging to the genus Anopheles. In rare cases, a person may contract malaria through contaminated blood, or a fetus may become infected by its mother during pregnancy.

Because the malaria parasite is found in red blood cells, malaria can also be transmitted through blood transfusion, organ transplant, or the shared use of needles or syringes contaminated with blood. Malaria also may be transmitted from a mother to her fetus before or during delivery ("congenital" malaria).

Malaria typically produces a string of recurrent attacks, or paroxysms, each of which has three stages – chills, followed by fever, and then sweating. Along with chills, the person is likely to have headache, malaise, fatigue, muscular pains, occasional nausea, vomiting, and diarrhea. Within an hour or two, the body temperature rises, and the skin feels hot and dry. Then, as the body temperature falls, a drenching sweat begins. The person, feeling tired and weak, is likely to fall asleep.

The symptoms first appear some 10 to 16 days after the infectious mosquito bite and coincide with the bursting of infected red blood cells (RBCs). When many RBCs are infected and break at the same time, malaria attacks can recur at regular time periods – every 2 days for P. vivax malaria and P. ovale, and every 3 days for P. malariae.

With P. vivax malaria, the person may feel fine between attacks. Even without treatment, the paroxysms subside in a few weeks. A person with P. falciparum malaria, however, is likely to feel miserable even between attacks and, without treatment, may die. One reason P. falciparum malaria is so virulent is that the parasite can infect RBCs in all stages of development, leading to very high parasite levels in the blood. In contrast, P. vivax parasites infect only young RBCs, which means the number of parasites in the blood does not reach the same high levels as seen in P. falciparum infection.

Healthcare providers should suspect malaria in anyone who has been in the tropics recently, who received a blood transfusion, and who develops a fever and other signs that resemble the flu. They examine blood smears taken from a finger prick under a microscope to confirm the diagnosis. A "thick" smear makes it possible to examine a large amount of blood. Then, the species of parasite can be identified by looking at a corresponding "thin" smear. Because mixed infections are possible, these techniques are important for deciding the best treatment. For example, a person can be infected with P. vivax as well as the more dangerous P. falciparum.

In most cases, healthcare providers can successfully treat people with malaria. To decide which medicine to use, they should try to identify the species of parasite responsible and the geographical location where the person was infected. International travel clinics, the Centers for Disease Control and Prevention, and the World Health Organization offer up-to-date information on the geography of malaria, including

Before leaving home, anyone traveling to an area with malaria should consult a knowledgeable healthcare provider, an international travel clinic, a local health department, the Centers for Disease Control and Prevention (CDC), or the World Health Organization (WHO) to obtain advice on what medicines to take before, during, and after the trip. Health risks for malaria vary with the destination, conditions of travel, and types of activities the traveler will undertake. A traveler who spends even a single night in a malaria-endemic area risks getting infected.

The CDC and the WHO have information on how to limit contact with mosquitoes, as well as current guidelines on antimalarial drugs.