Protozoa move about in three main ways. Sarcodines move by means of streaming protoplasmic extensions (A). The forward flow of inner palsmasol, couples with a continuous reversible change of fluid plasmasol into the outer, jelly-like plasmagel, produces movement. Mastigophora are equipped with flagella whose whiplike beating actions (B, C) pull the organism along. Ciliata have numerous tiny beating cilia (D) which propel them.

General features of a protozoan. 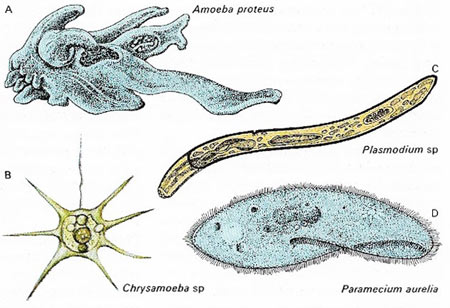 Protozoans can be divided into four classes on the basis of the way in which they move about. Sarcodines, such as Amoeba proteus (A), move by means of pseudopodia, extensions of their protoplasm. Pseudopodia are also used to form food cups for the capture of prey. Most sarcodines are free-living protozoans. Locomotion in Mastigophora (B) is produced by whip-like flagella. Sporozoa, which include the malaria-producing Plasmodium sp (C), are all parasitic and lack specialized locomotory structures. The class Ciliata contains a majority of free-living (non-parasitic) species such as Paramecium (D) that move by ciliary action. 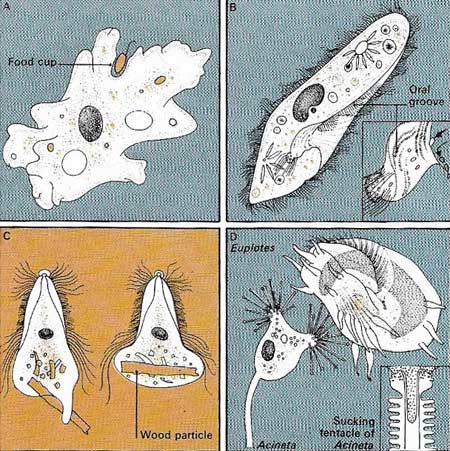 Like other animals, protozoans feed on complex organic food materials to obtain energy. Amoeba spp (A) engulf materials by forming food cups around them with special pseudopodia. Food is later broken down within vacuoles by the action of digestive enzymes. Paramecium spp (B) feeds primarily on bacteria drawn into the oral groove by the cilia. Trichonympha spp (C) are symbiotic protozoans that live in the guts of termites. They engulf wood particles that the termites cannot digest themselves. Acineta spp (D) feed only on specific species of ciliate. These are often several times larger than themselves.

A protozoan is any of a diverse group of animal-like protists (eukaryotic organisms that consists of a single cell). Protozoans are bigger than bacteria but still microscopic. Well known examples are amoeba, paramecium, and euglena. Protozoa were once considered to belong to the animal kingdom (Animalia) alongside the metazoans; however, this is no longer the case. Today, protozoans, along with ciliates, mastigophorans, and apicomplexans, are classed as animal-like protists. Biologists have identified about 65,000 species of protozoa, almost half which are extinct species from fossils.

• They live in many different environments; they can drift in the ocean, creep across vegetation in fresh water rivers and ponds, crawl in deep soil, and even reproduce inside the bodies of other organisms

• Most protozoa are heterotrophs, obtaining their nutrients by ingesting small molecules or cells. These particles are usually broken down in food vacuoles, which are membrane-bound chambers that contain digestive enzymes

• Many species of protozoa are free-living. These varieties dwell in any habitat where water or moisture is available at some time during the year, including the soil.

• Many species make up zooplankton, a population of organisms that constitutes one of the primary sources of energy in aquatic ecosystems. They are at the beginning of the food chain

• Other protozoa are parasites. These parasitic protozoa usually have complex life cycles that take place in the cells, tissues, and bloodstream of their host. Several species cause serious human diseases, including malaria, amoebic dysentery, and giardiasis

Many species of protozoa have physiological mechanisms for monitoring conditions in their environment. Free-living varieties often have a localized region of pigment called an eyespot, which can detect changes in both the quantity and quality of light. Certain protozoan species also sense physical and chemical changes or obstacles in their environment.

Many protozoans can survive in harsh conditions or severe changes in the environment, such as nutrient deficiency, drought, decreased oxygen concentration, or pH or temperature changes, by forming cysts. A cyst is a dormant form characterized by a hardened external covering inside which metabolic activity has ceased. When favorable environmental conditions return, a protozoan emerges from the cyst state and resumes metabolic activity.

About 30 types of protozoans are human parasites. These include the ones responsible for malaria, amoebiasis, girdiasis, sleeping sickness, trichomoniasis, taxoplasmosis, and leishmaniasis. Most cases of protozoan infection occur in tropical regions of the world.