Fig 1. Trace fossils are those in which no part or shape of an organism is preserved – only the footprints, burrows, or feeding trails. Trace fossils are valuable indicators of the lifestyles of extinct creatures. Sometimes an animal is known only from its fossil traces. For some animals these consist of tunnels or tunnel systems which are given group names according to their shapes and complexity. Repichnia traces (A) are long and fairly straight;the Pascichnia types (B) are meandering and cover a wide area. The Cubichnia burrow types (C) are usually short and straight and those of Fodinichinia (D) radiate from a single spot to cover a wide area. 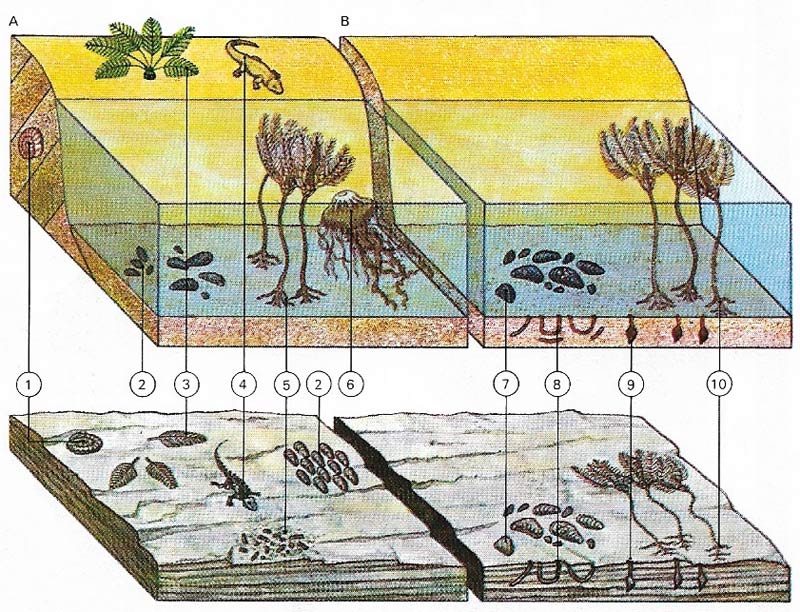 Fig 2. Fossils lie in two kinds of assembles: one that does not reflect the lifestyle of the organisms (called a death assemblage or thanatocoenosis), or one that does (a life assemblage or biocoenosis). Features of a thanatocoenosis (A) include derived fossils (1), fossils of an earlier age removed from a rock eroded at the time of deposition of the assemblage, shells disarticulated and aligned with the current (2), plant and animal remains from another environment brought in after death (3, 4), and fragile creatures such as crinoids, broken and scattered (5). Some soft-bodied creatures such as jellyfish (6) are never fossilized. A biocoenosis (B) has shellfish in their living positions (7), burrows and burrowing organisms undisturbed (8, 9) and crinoids still in one place (10). A thanatocoenosis is the results of currents and erosion disturbing remains and in a biocoenosis there is little or no disturbance of them. 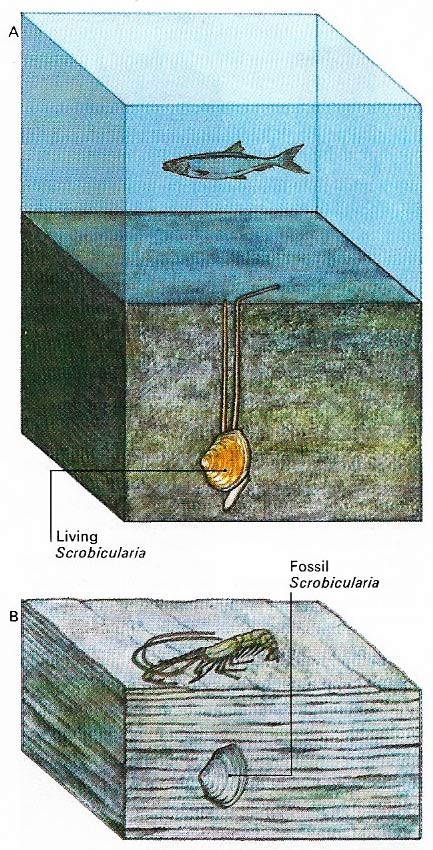 Fig 3. A facies fossil is indicative of a particular environment of deposition. The shellfish Scrobicularia lived only in oxygen-free mud (A). It shows that such muds formed the rock in which it is fossilized (B).The prawn and fish were mobile, not dependent on the mud, and thus are not facies fossils. 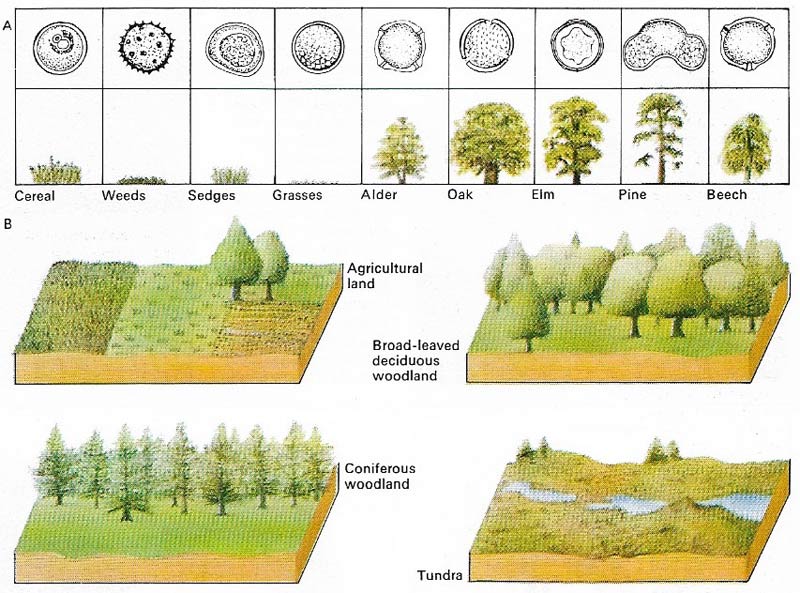 Fig 4. The study of microscopic fossils, micropaleontology, includes the study of pollen grains (A) found at different depths in recent soils. They indicate changing vegetation –- and hence changing climates – over the past few million years (B).

Fig 5. A fossil in a rock such as this belemnite is often a most unprepossessing item (A) and sometimes it takes a paleontologist to recognize it. The find could be made on a building site or it could be at the top of a m mountain in Peru; the fossil-hunter must work with it wherever the specimen is found. The removal of the fossil from the rock (left) can take place on the spot but more usually the fossil and matrix are transported back to the laboratory where the right equipment, preserving fluids, and technicians are on hand. Sometimes, if the fossil and the rock are of two very different materials – such as a calcite shell embedded in shale – removal is easy. More often the task involves months of laborious work scraping away the embedding material from round the specimen. The end product, after all this, is a prepared and mounted specimen (right). 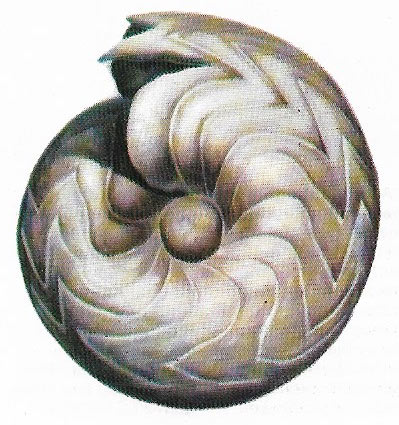 Fig 6. The goniatite was a nautilus-like mollusk with most of its body inside a coiled shell. The shell was divided into chambers by zigzag partitions that differed from species to species. As each species was a free swimmer and common throughout all the seas of the world at different times, whenever a recognizable species is found in a rock, that rock can be dated. The specimen shown here shows that the limestone in which it occurs is upper Carboniferous. 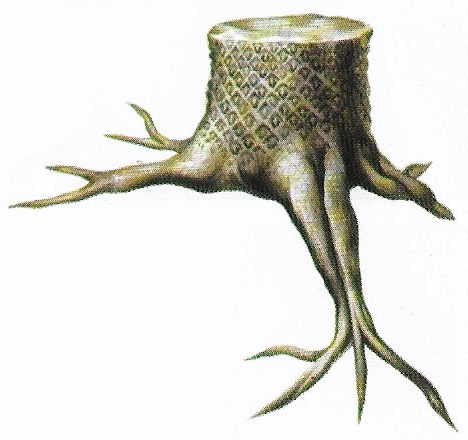 Fig 7. One of the commonest fossils in coal measures is that of a tree stump. The stump and roots keep their shape, being buried in the underlying sand, while the trunk and branches are turned to coal. 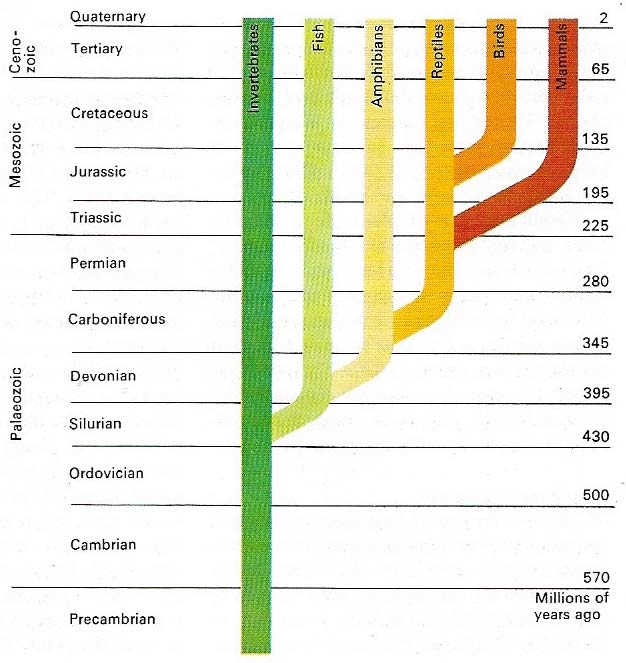 Fig 8. The appearance of different forms of animal life.

A fossil is the remains, traces, or impression of a living organism that inhabited the Earth during past ages (at least 10,000 years ago). Traces, may be, for example, footprints, burrows, or preserved droppings. The name "fossil" comes from the Latin meaning "something dug up".

Fossil remains take a number of forms. Petrification describes two ways in which the shape of hard parts of the organism may be preserved. In permineralization, the pore spaces of the hard parts are infilled by certain minerals (for example, silica, pyrite, calcite) that infiltrate from the local groundwater. The resulting fossil is thus a mixture of mineral and organic matter. In many other cases, mineralization (or replacement) occurs, where the hard parts are dissolved away but the form is retained by deposited minerals. Where this has happened very gradually, even microscopic detail may be preserved; but generally only the outward form remains.

Exceptional fossils are those where the organism has been preserved in its entirety: for example, mammoths in the Siberian permafrost, or insects in amber (though dehydrated). Sometimes teeth and shells may be preserved unaltered.

Often the organism is dissolved entirely, so that only a cast or impression remains in the rock. In the process of carbonization, the tissues decompose leaving only a thin carbon film that shows the outline of the organism's form.

Unusual types of fossil include gastroliths and coprolites. Gastroliths are smooth, rounded pebbles often found within the rib-cages of dinosaurs and swimming reptiles. These were swallowed by the animal possibly for the same reason that a modern fowl swallows grit: to help grind up food in the stomach. Coprolites are fossilized dung, most commonly associated with Tertiary mammals or Carboniferous fish. Such fossils give valuable clues to the diets and habits of extinct animals.

Fossils have not always been recognized for what they are. Although ancient Greeks such as Herodotus (c. 485–425 BC) noted their similarity to living animals and plants, later civilizations did not have the philosophies to account for them. Whole mythologies were built around fossils: mammoth skulls found on the Greek islands may have given rise to the Cyclops legends because the fused nostril cavity suggests a single eye socket. Native Americans regarded dinosaur skeletons as the remains of great serpents that lived beneath the surface of the Earth and died when they came to close to the light. Christian chronology, based as it was on biblical events and dating the Creation at about 4000 BC, made no attempt to account for the time involved in turning sediments into rock and raising mountains, so the true nature of fossils was obscured for many hundreds of years. For centuries they were regarded as tricks of the devil conjured up to test the faith of the people. Those who were convinced that they represented the remains of once living organisms could account for then as the remains of creatures destroyed in the Great Flood. Not until the beginning of the nineteenth century did paleontology (the scientific study of fossils) become a recognized science.

The detailed study of fossils, rather like a crime investigation, involves the piecing together of many diverse fragments of evidence and a vast number of techniques are used (6). The fossil could be a 25 m (82 ft) long dinosaur skeleton, which must be attended to by a large number of people on the spot where it is found, or it may be a microscopic structure found in the depths of a piece of rock revealed in laboratory studies.

Initially, in the case of the dinosaur, the bones have to be removed from the matrix, encased in some protective substance, and transported to a museum or laboratory, careful note and measurements first having been taken of the position in which the bones are found. The nature of the surrounding rock is also noted because this gives valuable information about the environment in which the creature lived. In the laboratory the bones are cleaned and treated to make them less fragile. Usually the individual bones are cast in plaster ora plastic material so that a facsimile of the skeleton can be assembled and put on display while the actual specimens are stored for research purposes.

The dinosaur remains are then compared to the hard parts of modern animals and a reconstruction is made, usually by means of model or computer reconstruction, showing the appearance of the animal when alive. The color of extinct animals is rarely preserved and is largely a matter of informed guesswork. When microfossils are studied, a likely looking rock is taken into the laboratory, sliced up, and treated with solvents that either corrode rock and fossil at different rates, so throwing the fossil into relief, or corrode only the rock.

Anyone with sufficient interest can find and collect fossils, but to identify and study them in depth an interest in and knowledge of animal and plant anatomy is essential. To locate fossils with accuracy an understanding of earth movements and processes that give rise to the preservation of organisms is also necessary. This will enable the fossil hunter to interpret the clues that they give about past conditions. Once they are removed from their matrix all fossils must be treated with respect and preserved in the best way.

Although fossils may be collected as a hobby, they are used by the paleontologist as the identifying "fingerprints" of a particular rock bed. An otherwise featureless bed of limestone containing fossils of a particular short-ranged species found at one locality can be identified at another locality by the presence of that fossil species. Or knowledge of the rates of animal and plant evolution can be used to give an age to the sedimentary rocks in which identifiable fossils are found. This branch of geology is known as stratigraphical paleontology.

Animals are selective about which environment they inhabit and a recognizable fossil in a rock can be the most important clue a geologist can have to the environment under which the rock was formed. The modern bivalve Scrobicularia, for example, lives only buried in oxygen-deficient mud. When a fossil Scrobicularia is found in shale it can be inferred that the shale was laid down in an oxygen-free environment. Such organisms are usually very sensitive to the environment and when they suddenly disappear in a geological succession it can be deduced that conditions have changed drastically.

The condition of the fossils is also important. If the remains are broken up and the fragments are well sorted any deductions made from them must be fairly suspect. It probably means that the dead bodies have been washed about by currents and in some cases they will have been brought into the area from a completely different environment. On the other hand, if the fossil is obviously in its life position, as for example a burrowing creature in its burrow or a sedentary organism still attached to its substratum, then it is quite certain that this is the environment in which it lived and deductions can be made accordingly.

Occasionally a derived fossil may be found. This is a fossil that has been eroded from an original rock and laid down with other rock debris to form the new deposit. Fortunately this occurrence is rare and is unlikely to confuse a trained geologist.