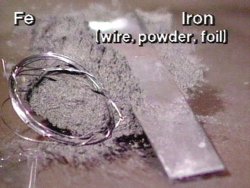 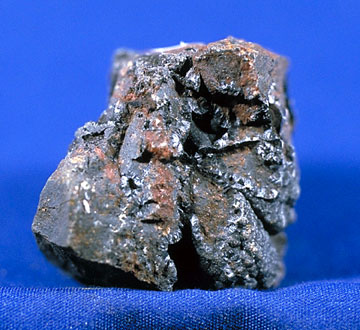 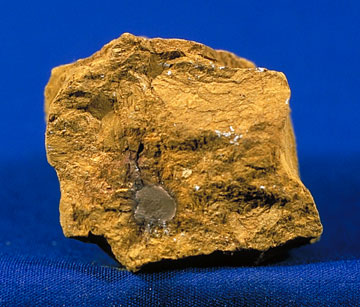 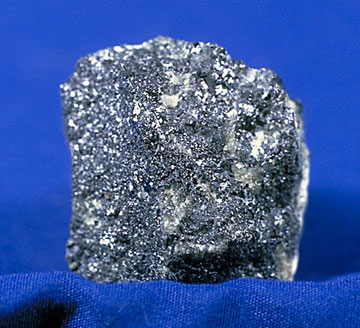 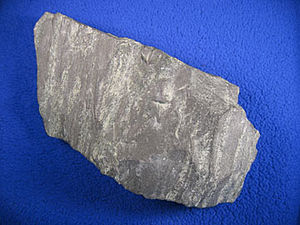 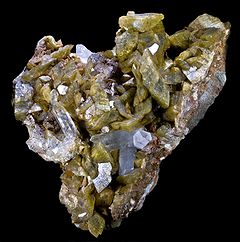 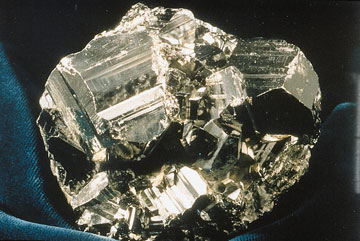 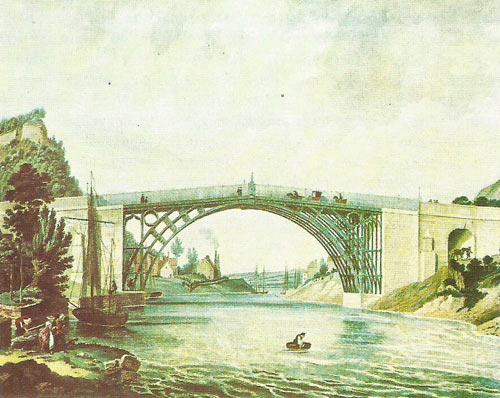 Fig 8. The Iron Bridge at Coalbrookdale, Shropshire, England – the first major bridge in the world to be made of cast iron. It was built by Abraham Darby III in 1779 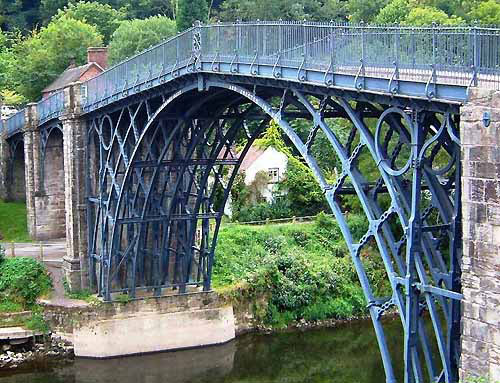 Fig 9. A contemporary photo of the Iron Bridge at Coalbrookdale. 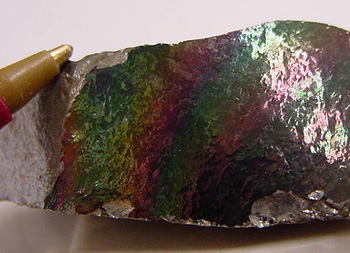 Iron (Fe) is a silvery-white, lustrous, malleable, ductile, magnetic or magnetizable, metallic element (Fig 1). It lies in group 8 of the periodic table and is a transition element. Iron is the most abundant element in Earth's core and the fourth most abundant (by weight) in Earth's crust; it also occurs in meteorites. Iron nuclei are created mostly by Type Ia supernovae, with additional contributions from Type Ib, Ic, and II supernovae. Iron is, from the point of view of its nucleus, the most stable element.

Combined iron is found most notably as hematite (Fe2O3), goethite, limonite (Fe2O3.H2O), and magnetite (Fe3O4), and also as taconite, siderite, chromite, and pyrite.

Hematite is a hard mineral consisting of iron (III) oxide (αFe2O3); it is the chief ore of iron (Fig 11). Hematite crystallizes in the rhombohedral system, with the corundum structure. It comes in two forms: red and gray. Red hematite is essentially rust; as well as a source of iron, it is used in paints (ochre) and polishes (rouge). Common on Earth, it also occurs everywhere on Mars and is responsible for the planet's distinctive red color.

Gray hematite has a dark gray metallic luster (Fig 12). Unlike the red variety, it usually forms over long periods of time, in the presence of liquid water, often standing bodies of liquid water. Gray hematite has been found on Mars in only three places, Meridiani Planum (the landing site for one of the Mars Exploration Rovers, Aram Chaos, and Valles Marineris. It was first identified on Mars by the Thermal Emission Spectrometer (TES), aboard Mars Global Surveyor.

Goethite is a brown hydroxide mineral, iron oxyhydroxide, of composition FeO(OH). It is a major iron ore of widespread occurrence, formed in bogs or by weathering of other iron minerals (Fig 2). Goethite is very similar to limonite, but is crystalline in the orthorhombic system as slender plates and velvety needles. X-ray diffraction analysis has shown that much supposed limonite is in fact goethite. Hardness: 5–5.5; relative density: 3.3–4.3.

Limonite, also called brown iron or bog ore, is a generally dark brown, amorphous oxide mineral consisting of hydrated iron (III) oxide (FeO[OH].nH2O). A major iron ore of widespread occurrence, often with goethite, it is formed by alteration of other iron minerals. Limonite may appear lustrous black, brown to yellow, and is streaky, porous, and often mixed with sand and clay (Fig 3).

Magnetite (Fe3O4) is a hard, black, strongly ferromagnetic (see magnet and ferromagnetism) form of iron oxide that is one of the major ores of iron, second only to hematite (see Figure 4). Magnetite crystallizes in the cubic system, as octahedral and dodecahedral crystals, and as granular masses. It is a mixed iron(II)-iron(III) oxide, also called ferrosoferric oxide, and belongs to the spinel group of minerals. It is widely distributed and occurs as an accessory mineral in many igneous and metamorphic rocks. The largest deposits are found in northern Sweden. Permanently magnetized deposits of magnetite were used in the ancient world as material for compasses, under the name lodestone. Hardness 6; relative density 5.2.

Tiny crystals of magnetite are produced by some terrestrial bacteria, known as magnetotatic bacteria, and used for orientation. The discovery of similar crystals in some Mars meteorites, including ALH84001, has been taken as evidence of past martian life, though this claim is hotly disputed.

Taconite is an unleached, low grade iron ore (Fig 5). It consists of a fine-grained flint containing hematite and several silicates. Taconite must be concentrated by leaching or magnetic processes before smelting.

Siderite is a brown, gray-green, or white mineral, iron (II) carbonate (FeCO3), found in sedimentary iron ores and as vein deposits with other ores (Fig 6). Its crystals are rhombohedral in the hexagonal system and it occurs as massive deposits or in granular form. Hardness 4, relative density 3.8. Iron meteorites are sometimes known as siderites.

Pyrrhotite is a magnetic mineral form of iron sulfide (FeS) (but variable), containing more sulfur than pyrite. Pyrrhotite is nonstoichiometric with composition Fe1-xS. Its color is a metallic bronze and forms massive aggregates or hexagonal, flat crystals (monoclinic). It may contain nickel and in such cases is mined as a nickel ore. It occurs in basic igneous rocks, for example in Scandinavia and Ontario. Improved smelting techniques now make it possible to extract the iron. Hardness 3.5–4.5; relative density 4.6.

Pyrite, also known as iron pyrites (Fe2S, iron (II) disulfide), is a hard, brittle, brass-yellow sulfide mineral sometimes called fool's gold because of its metallic lustre and resemblance to gold (Fig 7). It occurs worldwide, sometimes in coal, and is a major ore of sulfur. It was formerly used to produce sulfuric acid.

Pyrite crystallizes in the isometric system, usually as cubes. It alters to goethite and limonite. Hardness: 6.5; relative density 5.0.

It is extracted by smelting oxide ores in a blast furnace to produce pig iron which may be refined to produce cast iron or wrought iron, or converted to steel in the Bessemer process (now obsolete), open-hearth process, or Linz-Donawitz process.

Iron is nearly always used in the form of alloys, which are harder and stronger than the pure metal. Cast iron, wrought iron, and steel are the chief alloys made by adding carbon and small quantities of other elements to the iron. Except in special steels, such as stainless steel and tool steels, the percentage of iron in these alloys is very high – usually well over 95%. But it was only in the nineteenth century that any fairly cheap method of producing these alloys in large quantities was discovered.

Pure iron is very little used; it is chemically reactive, and oxidizes to rust in moist air. It has four allotropes. The stable oxidation states of iron are +2 (ferrous) and +3 (ferric), though +4 and +6 states are known. The ferrous ion (Fe2+) is pale green in aqueous solution; it is mild reducing agent, and does not readily form ligand complexes.

Pig iron is iron tapped from a blast furnace and cast into ingots known as pigs in preparation for conversion into steel, refined cast iron, or wrought iron. It has undergone no alloying or refinement.

Spiegeleisen is an alloy (its name is German for 'mirror-iron') based on pig iron, containing 5% carbon, and 15–30% manganese (Fig 10). It is added during steel manufacture as a reducing agent and to supply manganese.

Cast iron is a general term applied to various grades of iron, including gray iron and pig iron. It includes a wide range of iron-carbon-silicon alloys containing 1.7–4.5% carbon, with varying amounts of other elements, used for casting. Its properties depend largely on the composition and the annealing (hardening by slow cooling) process used. Gray iron (so-called because its fracture looks grayish) is the most widely used for casting vehicle engines, machinery parts, and many other products.

Wrought iron is the other main commercial form of smelted iron. It contains less than 0.3% carbon with 1 or 2% slag mixed with it. Originally it was made from ore in a forge, and later in a 'puddling' furnace, where it never becomes molten. Wrought iron replaced bronze in Asia Minor (c. 2000 BC) at the beginning of the Iron Age. In the 19th century wrought iron began to be used in building construction, but was replaced by steel after the invention of the Bessemer process and open-hearth process. Although it has useful mechanical properties, little wrought iron is now manufactured.

Ferrite is one of the crystalline forms of the metal iron, present together with other forms in steel, wrought iron, and cast iron. It is also called α-iron, and has highly magnetic properties. The name ferrite is also given to chemical compounds such as nickel ferrite (NiFe2O4) and zinc ferrite (ZnFe2O4), which are found naturally in rocks and also synthesized as magnetic materials.

Iron (II) sulfate (FeSO4.7H2O), also known as green vitriol or copperas, is a green crystalline solid, made by treating iron ore with sulfuric acid, used in tanning, in medicine to treat iron-deficiency anemia, and to make ink, fertilizers, pesticides, and other iron compounds. Melting point 64°C. Iron (III) sulfate is used in solution to stop bleeding, for example in pulpotomy of primary teeth.

The ferric ion (Fe3+) is yellow in aqueous solution; it resembles the aluminum ion, being acidic and forming stable ligand complexes, especially with cyanides.

Iron is required as a trace element by terrestrial living organisms. It is the most abundant metal in humans with healthy adults possessing some 3–4 g. Most of this occurs in the oxygen-carrying pigment hemoglobin found in red blood cells. It is also a constituent as cytochromes.

Iron is contained in a variety of foods, such as liver, meat, cereals (especially whole-grain), fish, green leafy vegetables, nuts, and beans. During pregnancy, iron supplements may be necessary for the healthy development of the baby.


Iron as a construction material

The first cast-iron bridge, built over the River Severn at Coalbrookdale, England, in 1779, represented the beginnings of iron as a construction material. The key to cheap iron was the development of blast furnaces and a smelting process using coke instead of coal. This was introduced from 1709, also at Coalbrookdale, by the Englishman Abraham Darby.