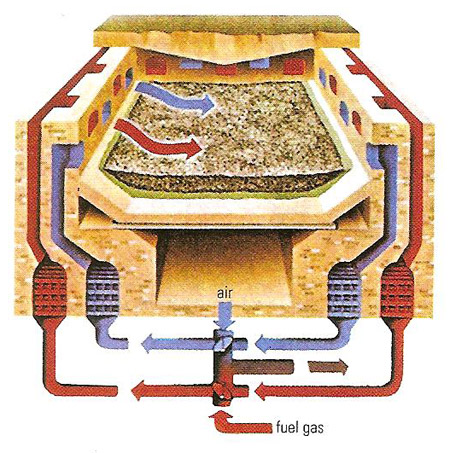 The Siemens-Martin open-hearth process used streams of air and fuel gas fed alternately onto the furnace contents. Gases from the molten charge were used to pre-heat the air blast and so economize on fuel. An alkaline lining was used if the ore contained phosphorus.

The open-hearth process is a technique that was, until a few decades ago, responsible for most of the world's steel production. It derives its alternative name, the Siemens-Martin process, from the work of William Siemens and Pierre Émile Martin Pierre in the 1850s and 1860s. It has now been superseded by electric and basic oxygen methods.

The furnace had two ducts leading each to a chamber of brick checkerwork. In use, the hot exhaust fumes were passed out through one duct, heating the brick to high temperature, while air intake was through the other. Periodically the streams were reversed, so that the incoming air was preheated by the hot brick before passing the burners, thus greatly increasing the flame temperature. Some furnaces were liquid-fueled, but if the fuel was gaseous it might have been fed in with the air.

In the basic process, the charge was of iron ore, scrap steel, and limestone. The impurities in the ore combined with the limestone to form a basic slag. In the less important acid process, refractories of silica resulted in an acid slag.