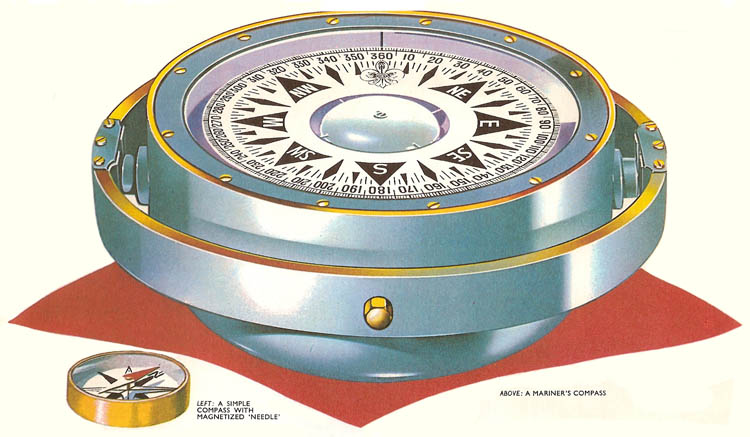 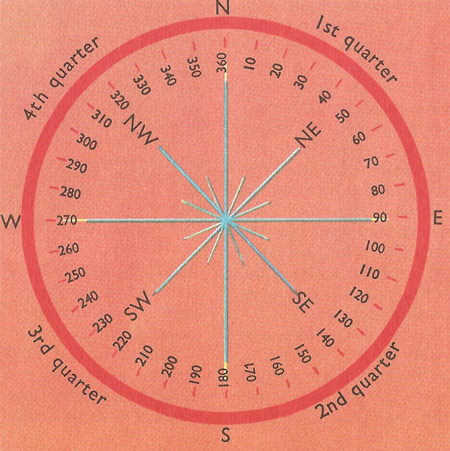 To meet this need for accuracy the complete circle of the horizon is divided into 360 degrees, and the degrees into minutes and seconds. In this way the bearing or direction of every point of the horizon can be determined with great accuracy, and when a point is shown with degrees it is certain that any initial mistake is extremely small. Also, when traveling on this type of bearing, any small deviation made at the start can be corrected during the journey. 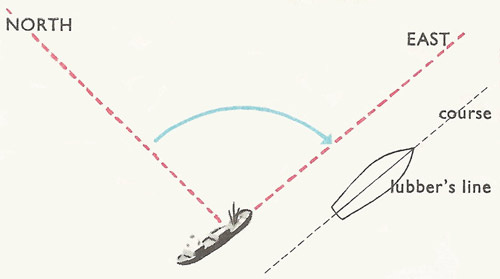 The lubber's line, which extends along the center of the hull of a ship from stem to stern, must coincide with the exact course.

Orientation without a compass. 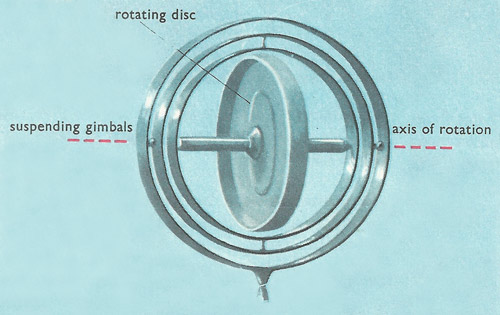 How a gyroscopic compass works.

A compass is an instrument for measuring direction parallel to the Earth's surface. Most compasses make use of the Earth's magnetic field; if a bar magnet (see magnetism) is pivoted at its center so that it is free to rotate horizontally, it will seek to align itself with the horizontal component in its locality of the Earth's magnetic field. A simple compass consists of a magnet so arranged and a compass card marked with the four cardinal points and graduated in degrees.

In a mariner's (ship's) compass, to compensate for rolling, the card is attached to the magnet and floated or suspended in a liquid, usually alcohol. Aircraft compasses often incorporate a gyroscope to keep the compass horizontal.

The two main errors in all magnetic compasses are variation (the angle between lines of geographic longitude and the local horizontal component of the Earth's magnetic field) and deviation (local, artificial magnetic effects, such as nearby electrical equipment). Both vary with the siting of the compass, and may be with more or less difficulty compensated for.

A radio compass, used widely in aircraft, is an automatic radio direction finder, calibrated with respect to the station in which it is tuned.


History of the compass

It is said that the Chinese emperor Hwang-ti had an instrument on his chariot which indicated south. If so, this must have been one of the very first magnetic compasses, for he lived around 250 BC. The introduction of the compass to Europe, via the Arabs, brought about a revolution in the art of navigation and played a vital role in the great voyages of discovery.


Science of the compass

The magnetic compass consists essentially of a small magnet in the shape of a needle which is allowed to swing freely on a pivot. Wherever it may be, the pivoted magnet will turn so that its ends point north and south. This is because the Earth itself behaves like a giant bar magnet whose axis almost coincides with the axis upon which the Earth spins. Since unlike magnetic poles attract each other (and like poles repel) the pivoted magnet in the compass will turn so that its north and south poles face the Earth's South and North Magnetic Poles respectively. Since the compass needle indicates the direction of the north and south it enables other directions to be determined.

The main snag with the magnetic compass lies in the fact that the North and South Magnetic poles do not quite correspond to the North and South Geographic Poles (i.e., the points where the Earth's rotational axis emerge from the planet's surface). Thus a compass needle does not point towards True North and the error is known as variation. Fortunately this is a known error that can be allowed for in a compass reading.

Another error in the reading is caused by the presence of iron-bearing metal in the vicinity of the compass. The Earth's lines of magnetic force find it easier to pass through iron-bearing metal than they do through air. Hence they converge in the metal and produce a local magnetic field of greater strength than normal which may deflect the compass needle from its north-south position considerably. Such an error, known as deviation, is especially marked in a ship. It is reduced as much as possible by fitting compensating magnets around the compass and checking it at regular intervals.

In a normal small compass the pivoted magnetized needle swings about a fixed compass card with the cardinal points (north, south, east, and west) and further sub-divisions. But in a mariner's compass the card itself is pivoted, and attached to the underside of it are several strips of magnetized metal to increase the magnetic effect. In this case a reference mark is drawn on the inside of the compass box exactly in line with the keel of the ship and the reading on the compass card which falls opposite it indicates the ship's course.

One of the difficulties involved in a mariner's compass is the swinging of the compass card due to the movement of the ship. This is overcome by filling the compass bowl with alcohol so that the card nearly floats. Thin wires attached to the card hand down into the liquid and stop it swinging too much.


Points of the compass

The Earth rotates from west to east, as seen from above the North Pole. It is for this reason that in the morning we see the Sun appear slowly from the east; but in reality it is the Earth that turns toward the Sun by rotating in the direction of this cardinal point. We have come to accept that the Sun rises from the direction called the east.

Evening or night was called vassati in ancient Indian; the Latin word was vesper. It was from these two words that the word 'west' was formed to indicate the sunset. This is the reason why the point where the Sun appears to set, which is opposite the east, was called 'west'. In this case also it is the rotating Earth that slowly hides the Sun from our view.

The Earth rotates about an axis that runs through its center. If we draw a straight line extending the axis of the Earth from the North Pole into the sky, it would lead to a star called the Pole Star. Therefore when we look at the Pole Star we know we are facing north.

Centuries ago, navigators from the north who sailed as far as the equator noticed that those regions were much warmer than their homeland in Europe. To give these new areas a name they used words such as 'sudh', 'sunno' or sonne' – all meaning 'sun' or 'heat'. With the passing of time these words became the word 'south'.

Sometimes it is necessary to give a direction with absolute precision and even the intermediate points are not sufficient. The smallest initial deviation in the angle of direction increases into a very large difference at great distance.

They must orientate themselves – that is, they must discover whether their destination is to the north or to the south, to the east or to the west of the place where they are. They must draw an imaginary line joining the place where they are with the point they wish to reach. This line will be the course along which they should travel. When using a compass, it's important to remember, as mentioned above, that the north to which is points is magnetic north, differing by a few degrees from geographic or true north. This small deviation – the magnetic declination – when plotting a course and the proper adjustments made.


Orientation without a compass

It is easy to find one's bearings with a compass. But how is it possible to find the right direction without a compass? Two means of doing so are by the Sun and the stars. In the case of the Sun we need the help of a watch. We know that:

1. The Sun rises in the east.
2. The Sun sets in the west.
3. If you face east, the north is on the left and the south on the right.
4. Starting with this knowledge, place the watch on the palm of one hand with the hour had set in the direction of the Sun. Then imagine a line that joins the center of the watch with the figure 12. This line forms an angle with the hour hand.
5. Next, trace an imaginary line that divides this angle in half. This line indicates south, and therefore north lies in the opposite direction. This applies only in the Northern Hemisphere.

The north indicated by the compass is the magnetic north and not the geographic north. Pilots, sailors and scientists, however, must know the position of geographic North. To find this a gyroscopic compass is used. Once this instrument has been set exactly on geographic north it is not affected by the masses of iron or electric machines that happen to be in the neighborhood, as happens with a magnetic compass. Besides this, the gyroscopic compass can keep directions even over the poles, which a simple compass cannot do.

The gyroscopic compass consists essentially of a gyroscope. This instrument is formed by a heavy disk rotated at high speed by electricity. Its axis is supported by a system of concentric rings, or gimbals, in such a way that the rings can be rotated or inclined without moving the disc with them.

It is known that every rotating body tends to maintain its axis of rotation pointed always in the same direction. When the gyroscope is set in motion, therefore, its axis will keep a constant direction, and as it is mounted on the gimbals it will keep this direction even if the vehicle on which it is set moves. The gyroscope is not affected by the rotation of the Earth.