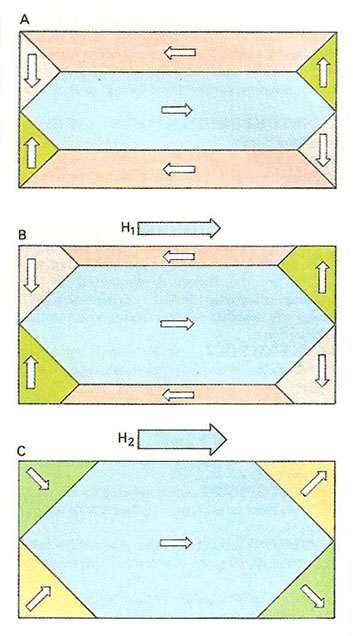 (A) In an unmagnetized rectangular single crystal of iron, the domains are arranged such that the external magnetic field is minimized. (B) In the presence of an external magnetic field (H1), the domains aligned with the field grow at the expense of those aligned against the field. This process continues until (C) the contrary domains are eliminated and the direction of magnetization in the peripheral domains rotates.

Magnetism is the science of magnetic phenomena, including the fields and forces produced by magnets and, more generally, by any moving electric charges. Magnetism is named after Magnesia, a region in central Greece where lodestone (magnetite a form of iron oxide) was found in ancient times. It appears, from the writings of Lucretius, that the Greeks and Romans were aware that magnetic iron ore could imbue ordinary iron in contact with it with its own peculiar property. The early Chinese also knew about this strange rock with the power to attract iron.

A magnetized bar has its power concentrated at two ends, its poles; they are known as its north (N) and south (S) poles, because if the bar is hung by its middle from a string, its N end tends to point northwards and its S end southwards. The N end will repel the N end of another magnet, S will repel S, but N and S attract each other. The region where this is observed is loosely called a magnetic field.

Either pole can also attract iron objects such as pins and paper clips. That is because under the influence of a nearby magnet, each pin or paper clip becomes itself a temporary magnet, with its poles arranged in a way appropriate to magnetic attraction.

Around AD 1000 in China it was found that a needle, magnetized by stroking it with lodestone, would align itself north-south when freely suspended. The discovery of the magnetic compass soon spread to Europe. Christopher Columbus used it when he crossed the Atlantic Ocean, noting not only that the needle deviated slightly from exact north (as indicated by the stars) but also that the deviation changed during the voyage. Around 1600 William Gilbert, an English doctor and personal physician to Queen Elizabeth I, found the explanation.

Gilbert of Colchester, as he is often known, made a model of the Earth by shaping a round ball of lodestone. He called this model a terrela, or "little Earth", and placed on it a series of small iron needles. Then he made his great discovery. The needles behaved exactly like compasses. Not only did they point to the lodestone's north pole, but they also dipped at various angles in different places, just as compass needles do on the Earth's surface. Gilbert was able to show, therefore, that the Earth is itself a magnet, with its magnetic poles near the geographic north and south poles. He also demonstrated that the compass needles follow the lines of magnetic force which flow in an arc around the Earth between the magnetic poles.

Gilbert put down his ideas in De Magnete (About the Magnet) published in 1600. This was not his only contribution to the study of magnets. He realized, for example, that there are connections between electricity and magnetism.

The observation that like poles of a magnet repel each other had been made towards the end of the 16th century. In view of the widespread use of compasses prior to this time, it is surprising that the discovery had not been made earlier. Undoubtedly, a cause that contributed to the delay is the fact that a magnetized piece of iron, even if it is initially repelled when brought near a strong magnet, may be induced to reverse its polarity and so experience an attraction. See also Coulomb's law for magnets.

Until 1821, only one kind of magnetism was known – the one produced by iron magnets. Then the Danish physicist Hans Christian Oersted, while demonstrating in a lecture the flow of an electric current in a wire, noticed that the current caused a nearby compass needle to move.

The new phenomenon was studied in France by André Marie Ampère, who concluded that the nature of magnetism was quite different from what everyone had believed. It was basically a force between electric currents: two parallel currents in the same direction attract, in opposite directions repel. (Iron magnets are a very special case, which Ampère was also able to explain.)

Replace each circle with a coil of 10, 100, or more turns, carrying the same current: the attraction or repulsion increase by an appropriate factor. In fact, each coil acts very much like a magnet with magnetic poles at each end (an electromagnet). Ampère guessed that each atom of iron contained a circulating current, turning it into a small magnet, and that in an iron magnet all these atomic magnets were lined up in the same direction, allowing their magnetic forces to add up.

The magnetic property becomes even stronger if a core of iron is placed inside the coils, creating an electromagnet; that requires enlisting the help of iron, but is not essential. In fact, some of the world's strongest magnets contain no iron, because the added benefit of iron inside an electromagnet has a definite limit, whereas the strength of the magnetic force produced directly by an electric current is only limited by engineering considerations.

Michael Faraday, credited with fundamental discoveries on electricity and magnetism, also proposed a widely used method for visualizing magnetic fields. Imagine a compass needle freely suspended in three dimensions, near a magnet or an electrical current. We can trace in space the lines obtained when one follows the direction of the compass needle. Faraday called them lines of force, but the term field lines is now in common use.

Field lines of a bar magnet are commonly illustrated by iron filings sprinkled on a sheet of paper held over a magnet. Similarly, field lines of the Earth start near the south pole of the Earth, curve around in space and converge again near the north pole.

Faraday not only viewed the space around a magnet as filled with field lines, but also developed an intuitive (and perhaps mystical) notion that such space was itself modified, even if it was a complete vacuum. His younger contemporary, the great Scottish physicist James Clerk Maxwell, placed this notion on a firm mathematical footing, including in it electrical forces as well as magnetic ones. Such a modified space is now known as an electromagnetic field.

Today electromagnetic fields (and other types of field as well) are a cornerstone of physics. Their basic equations, derived by Maxwell, suggested that they could undergo wave motion, spreading with the speed of light, and Maxwell correctly guessed that this actually was light and that light was in fact an electromagnetic wave.

Today, physicists explain magnetism in terms of magnetic dipoles. Magnetic dipole moment is an intrinsic property of fundamental particles. Electrons, for example, have a moment of 0.928 × 10-23 A.m2 parallel or antiparallel to the direction of observation. The forces between magnetic dipoles are identical to those between electric dipoles. This leads scientists often to regard the dipoles as consisting of two magnetic charges of opposite type, the poles of traditional theory. But unlike electric charges, magnetic poles are believed never to be found in isolation.

In ferromagnetic materials (see ferromagnetism), such as iron and cobalt, spontaneous dipole alignment over relatively large regions known as magnetic domains occurs (see diagram at upper right. Magnetization in such materials involves a change in the relative size of domains aligned in different directions, and can multiply the effect of the magnetizing field a thousand times. Other materials show much weaker, nonpermanent magnetic properties (see diamagnetism, paramagnetism).