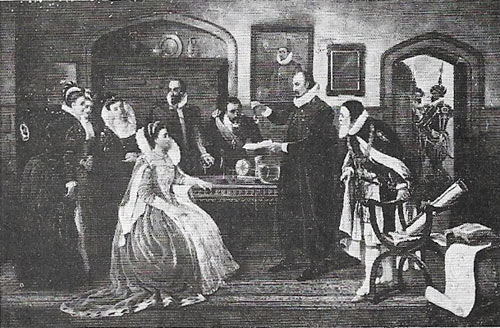 In this painting by A. Ackland Hurst, William Gilbert is shown demonstrating magnetic phenomena to Elizabeth I.

William Gilbert was an English physicist and physician to Elizabeth I, whose De Magnete, Magneticisque Corporibus, et de Magno Magnete Tellure, Physiologia Nova (1600) was the first major work in Europe to describe the characteristics of magnets in an organized way and laid the foundation for the scientific study of magnetism. Some of his theory is now known to be incorrect but it was still the most important contribution to the subject for many years.

Gilbert's work on magnets led to the theory, broadly correct, that the Earth is a magnet with its poles at the North and South Poles. He was the first to use the terms magnetic pole, electricity, electric force, and electric attraction, and to point out that amber is not the only substance which when rubbed attracts light objects, but that the same property is shown by resins, sealing wax, sulfur, glass, and some other substances. The unit known as the gilbert is named after him.

Born into a wealthy family in Colchester, Essex, Gilbert studied at, and subsequently became a fellow of St. John's College, Cambridge. In 1573 in settled in London to practice as a physician. Eventually Elizabeth I made him her court physician, and the same office was confirmed in him by James I on his succession to the throne. After holding various offices in the College of Physicians, he was finally elected its president in 1600. He studied magnetism and chemistry in his leisure time.

Gilbert made for himself a model of the Earth, a tiny replica shaped out of the magnetic rock known as lodestone. He called this model a terrella, or 'little Earth', and on it he placed a series of small iron needles. Then he made his great discovery. The needles behaved exactly like compasses. Not only did they point to the lodestone's north pole, they dipped at various angles at different places, just as the compass needles do on the Earth's surface. His conjecture that terrestrial magnetism and electricity were related was only confirmed experimentally much later, by Oersted and Faraday.