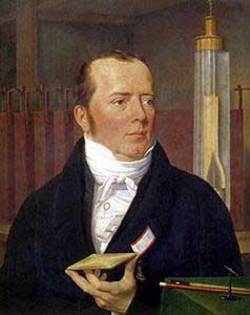 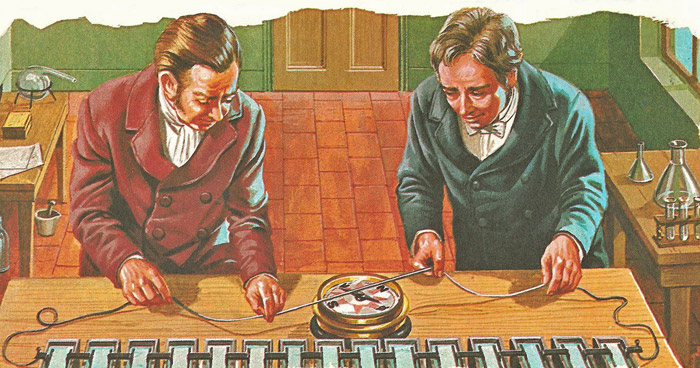 Oersted showed that a behaves like a magnet when a current flows through it. Change the direction of the current, and the needle is deflected the opposite way. The current sets up a magnetic field around the wire.

Hans Oersted was a Danish physicist and pharmacist whose discovery that a magnetized needle can be deflected by an electric current passing through a wire (1820) gave birth to the science of electromagnetism. He also made many discoveries in chemistry, and was among the first to obtain aluminum in reasonably pure form. In common with many of the other early workers in electricity, Oersted's name was give to an electrical unit. The oersted is a unit of magnetic field strength or intensity.

Oersted was born at Rudköbing, on the Danish island of Langeland, and studied medicine at the University of Copenhagen, where in 1806 he was appointed professor of physics. He held numerous scientific appointments and honorary offices and distinctions. Of his many works the best known are Naturlarens Mechaniske Deel (1845) and Aanden i Naturen (1850). His brother Anders Sandöe, was a distinguished Danish statesmen.


Oersted and the deflecting needle

Oersted was one of the many physicists who, in the early 19th century, were experimenting with the new 'current electricity', introduced by Volta a few years earlier. They were looking for a connection between this and the age-old study of magnetism – at the time a completely separate science, still shrouded in mystery.

In search of a connection between electricity and magnetism,Oersted passed electric currents through wires and put magnets in various positions near the wires, hoping to see some interaction. But he was a notoriously bad experimenter, and had always to have an assistant on hand to help perform the simplest experiment. It is said that Oersted's epoch-making discovery was in fact an accident.

In 1819 he was lecturing to students and showing them that the current flowing in a wire held over a magnetic compass needle and at right-angles to it (i.e. east-west) had no effect on the needle. Oersted suggested to his assistant that he might try holding the wire parallel to the length of the needle (i.e. north-south). The assistant did and the needle was at once deflected.

This was the first recorded instance of a wire behaving like a magnet when a current is passed through it. Oersted knew that exactly the same deflection happened when the wire was replaced by another magnetic compass needle. He had discovered electromagnetism. In further experiments Oersted interposed all manner of materials between the wire and the needle, and showed that the influence of the wire could pass through these materials. He thus confirmed that the current flow had set up a magnetic field around the wire. The field from the wire had interacted with the field from the compass needle. When wire and needle were parallel the combined effect of their fields was to deflect the needle away from the north.

Later experimenters, such André Ampère and Michael Faraday, were to formulate the laws which govern electromagnetism. Faraday increased the magnetic effect of Oersted's single wire by bending it round into coils.