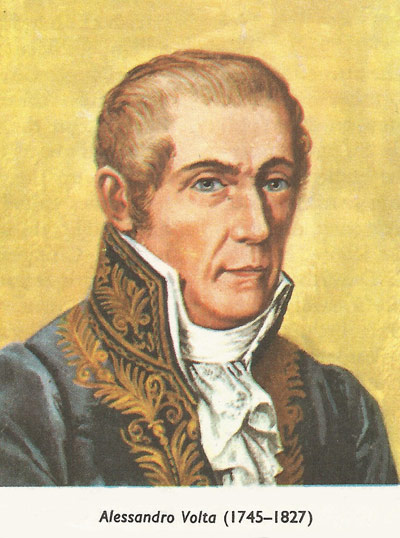 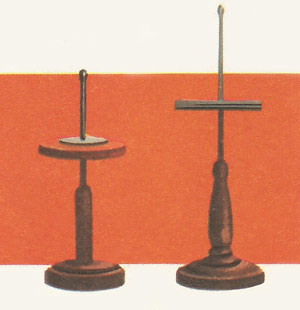 Two models of the electrophorus that Volta invented. 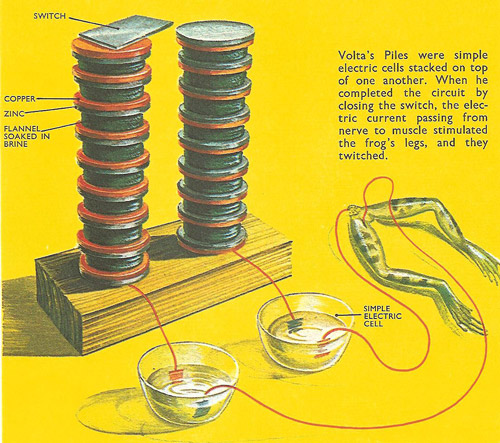 Alessandro Volta was an Italian physicist who made the first simple cell and invented the electrophorus. Volta was born in Como and although not considered particularly clever as a child, at age 17 he could speak Latin, German, and French as well as Italian. At about this age he became interested in electricity. By repeating the experiments of Galvani (see below) he began to acquire a thorough understanding of everything that was then known about electricity. By the time he was 29 he had became a teacher of physics at the high school in Como, and five years later he left Como to join Pavia University as the first professor of physics there.

At this time only the effects of static electric charges were known. These charges could be produced by rubbing glass or amber with silk or fur, but no one had been able to measure how much electricity was present in them.

Most of his early experiments were conducted with the minute quantities of electricity provided by friction (static electricity). With the electrophorus he improved the methods of making frictional electricity but the electrophorus could do no more than produce sparks – sudden movements of electrical charge. It was an entertaining toy with no practical uses, for the currents it produced flowed for only a fraction of a second, and were still about a million times smaller than those we use today for heating and lighting. Very little could be done with these tiny amounts.

Volta also made an electrometer (now called an electroscope) to measure electric charges. In his first electrometer he arranged for the charge that he wanted measured to be shared between two straws, and since like charges repel one another, he could measure the size of the charge by the distance that the straws moved apart. Volta later replaced the straws by two pieces of gold leaf. When these were charged electricity the angle between them gave a measure of the size of the charge.

Much interest at the time was centered on "animal electricity" – the effects of passing electric current through animal tissue, usually frog's legs. Another Italian scientist, Luigi Galvani, had connected a copper rod to the nerve in a frog's leg, and a rod of a different metal, iron, to the muscle. When the ends of the two pieces of metal were placed in contact, the muscle twitched, as it did when an electric current passed through. Galvani thought that electricity had been produced, in some mysterious way, by the twitching of the muscle.

Volta continued the experiments started by Galvani using muscles and nerve fibers from frog's legs. He obtained the same effect by touching the nerve at two different points with strips of two different metals (for example, silver and copper), the other ends of which were in contact with each other. Where they touched the nerve, the metals were separated by a conducting solution (the weak electrolytic solution in the frog's leg). But Volta realized that animal tissue was not necessary at all. When he was describing the results of this experiment he said: "It is clear that the cause of this flow of electricity is the metal themselves".

In 1799 Volta made the first simple cell by dipping rods of copper and zinc into brine, and joining them. An electric current flowed through the circuit that joined them. The current was far larger, and lasted far longer, than anything experienced before. High potential differences (voltages) could be obtained by connecting simple cells in series. This idea led to the voltaic pile, which consisted of alternate layers of zinc and copper disks, separated by flannel disks soaked in brine or acid.

Credit is given to Volta for the invention of the simple cell, but he never found the right explanation for its working. He wrongly ascribed the current to the actual contact of the two metals, whereas it in fact results from chemical action of the electrolyte on the zinc rod.

The discovery (published in the Philosophical Transactions of the Royal Society in London) was acclaimed immediately, and in 1801 Volta went to Paris to demonstrate his so-called "contact" electricity to the Emperor Napoleon. Later, the unit of electric potential, the volt, was named after him.

Although Volta himself was interested in developing his batteries than applying them, the voltaic cell rapidly became used by scientists everywhere as a powerful tool for research. The currents produced with the aid of voltaic cells led to the discovery of the heating, chemical, and magnetic effects of electricity.

Volta had two sisters who were nuns and a brother who was a monk, and like them he seemed uninterested in worldly pleasures – his only loves being study and teaching. However, when he was 50 he married Teresa Peregrini and for the rest of his life was devoted to his family. He even tried to give up active research, and in 1804 he begged to be relieved of his professorship in Pavia, only to be informed by Napoleon: "I cannot agree to Volta's resignation ... a good general must die upon the field of honor." In 1815 he was appointed director of the philosophical faculty of the University of Padua.

Only for the last eight years of his life was Volta able to live in his home town of Como, where he died at the age of 82 after a peaceful retirement.