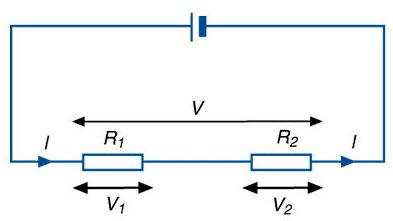 A series circuit is an electrical circuit in which the components are connected end to end, so that the current flows through them all one after the other. The current must move in "series" first going to one component, such as a resistor, then the next. If one of the items in the circuit is broken then no current will flow through the circuit. Old style Christmas tree lights were often wired in series. If one bulb burned out, the whole string of lights went off.


Current in a series circuit


Voltage in a series circuit