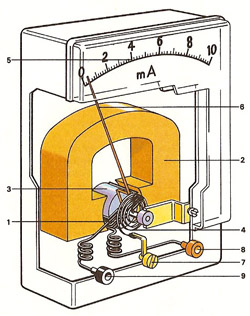 A moving-coil milliammeter. This consists of a rectangular coil wound on an aluminum former (1) mounted so that it can rotate between the poles of a permanent magnet (2). A soft iron core (3) ensures that a uniform radial magnetic field acts on the coil. When a current flows in the coil it experiences a torque which tries to turn it against the tension in a hair spring (4). The extent to which the coil turns is proportional to the current flowing and this is read off on a scale (5) with the aid of a pointer (6) attached to the coil assembly. Adjustment (7) is provided for zeroing the pointer and the instrument is connected into a circuit through terminals (8) and (9).

An ammeter is an instrument used for measuring electric currents greater than 1μA. It is (with the exception described in the next paragraph) connected to a circuit in series with the components through which the current is flowing.

Most direct-current ammeters are similar in design to the moving-coil galvanometer used for smaller currents, though they differ in passing most of the test current through a low "shunt" resistance (thus bypassing the coil) and in using a pointer fixed to the coil assembly to indicate the reading on the linearly calibrated scale. For alternating currents either a rectifier can be used with a moving-coil instrument or the less sensitive hot-wire or moving-iron instruments can be used.

There is a class of ammeters that gauges the magnetic flux surrounding a conductor to determine current level in the conductor through induction or Hall effect transduction. These meters need not be inserted into the circuit proper. The Hall effect clamp-on ammeter offers no additional impedance in use with dc circuits (a short reluctive transient occurs on first clamping) while the inductive unit adds a small amount of inductive reactance in series when used with AC circuits. At power frequencies (25 to 400 Hz) this additional reactance is trivial.