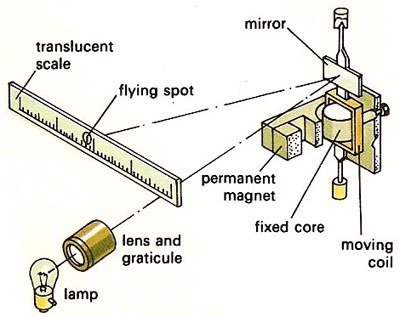 Principle of the moving-coil galvanometer.

A galvanometer is an instrument used to detect and measure very small electric currents. Most modern galvanometers are of the moving-coil type in which a coil of fine wire wrapped around an aluminum former is suspended by conducting ribbons about a soft iron core between the poles of a permanent magnet. When a current flows through the coil, a magnetic field is set up which interacts with that of the permanent magnet producing a torque. This turns the coil until it is fully resisted by the suspension, the displacement produced being proportional to the current. The result is read from a scale onto which a light beam is reflected from a mirror carried on the suspension ribbons.

If all electromagnetic and mechanical damping can be eliminated from such an instrument, it can also be used as a ballistic galvanometer to measure small charges and capacitances. See also ammeter.