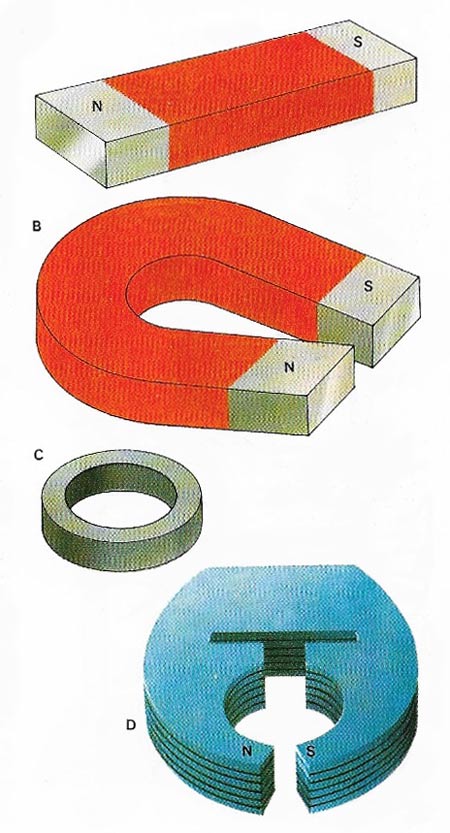 Fig 1. Magnets can be made in almost any form, from the bar (A) to the horseshoe (B), a ring (C) or a shape like that of D, used in an electrical measuring instrument. The poles are marked as N and S. 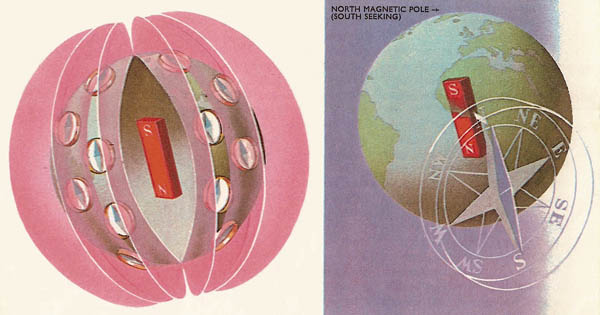 Fig 3. Atoms of iron behave like tiny magnets, and groups of atoms line up to form larger magnets, called domains (represented by magnets in the diagram). The domains in unmagnetized iron are arranged so that their effects cancel. If the iron is put into a magnetic field (right) the domains line up in the same direction as the field. 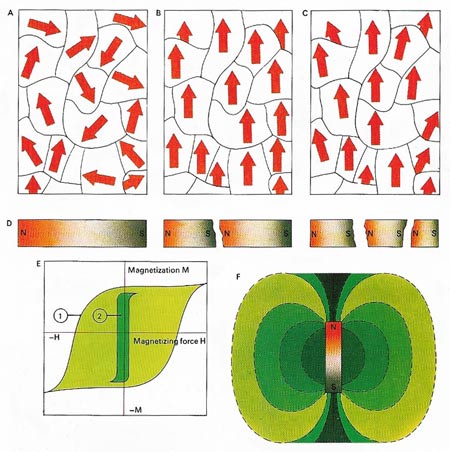 Fig 4. The random arrangement of domains in unmagnetized domains (A) becomes highly ordered in a strong external magnetic field (B). On removing the field the domains do not revert completely but retain some degree of alignment (C). Domains on each side of any breaks ensure that large bar magnets always split up into smaller replicas of themselves (D). Increasing the magnetizing force beyond a certain limit (E) cannot increase perfect alignment, and the material 'saturates'. Reversing the magnetizing force causes demagnetization. Different materials have similar shaped curves (1 and 2). Removing the magnetizing force leaves the material partly magnetized (F). 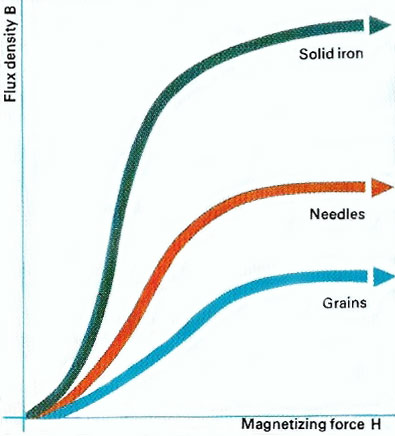 Fig 5. Solid iron is more easily magnetized than any of the forms of powdered iron (such as the grains of iron, represented by the blue curve, or needles, represented by the red curve, which are joined with a bonding agent) as the domains form an uninterrupted array.

A magnet is an object that produces a magnetic field – an area around the magnet in which other magnetizable objects experience a force. Lodestones, which contain the ore magnetite and are naturally magnetic, were used as early magnets, and strong magnetic materials were later recognized as containing iron, cobalt, or nickel.

A typical permanent magnet is a straight or horseshoe-shaped magnetized iron bar with the ends called the north and south magnetic poles (Fig 1). Earth is a giant magnet, its magnetic lines of force being detectable at all latitudes (Fig 2).

An electromagnet is much stronger than a permanent one and can be used for raising heavy steel weights and scrap. A superconducting magnet, the strongest of all, is made from special alloys cooled to very low temperatures.

Unconsciously, we use magnets every time we switch on an electrical appliance. Telephones, dynamos, the electric motors in hair-dryers, vacuum cleaners, and so on all contain magnets. And the electricity meter, which records every unit of electricity, works by magnetism.

The fact that magnets are used so much in electrical appliances suggests that there is a very close connection between magnetism and electricity. Indeed magnetism in all these cases is caused by electric currents (i.e., moving electricity).

A current flowing along a wire sets up a magnetic field around the wire. This means simply that the effect of the current is not confined to the wire, but spreads around it. Hans Oersted demonstrated this in 1819. He found that a magnetic compass placed near a current-carrying wire was deflected. Electric currents and magnets both made the same kind of field around them and these fields in Oersted's experiment had affected each other, deflecting the compass needle. Michael Faraday showed that a wire bent into a coil developed regions where the magnetic field of force appeared to be centered. They were called "north-seeking" and "south-seeking" (or simply "north" and "south") because they behaved like the north-seeking and south-seeking poles of an ordinary bar magnet. There must always be two ends to every coil of wire, so north and south poles always occur in pairs, one at each end of the coil. Thus it is impossible to make a single isolated north or south pole.

On the face of it, there is very little to distinguish north from south. But we know there must be two different types, because it is found that two poles of one type repel each other, while two poles of different types attract. This is similar to the behavior of electric charges when they are stationary. An accumulation of electric charge – either positive or negative – is called an electric pole. Two positive charges (like poles) repel each other, while a positive and negative (unlike poles) attract each other.

At first sight, the coil of wire looks very different from the bar magnet, and it is difficult to realize, in these two entirely different forms, that it is the same sort of phenomenon making the magnetic effect.

The current in a coil of wire is a flow of negatively charged particles, called electrons. In a conducting coil these are free to move when they are acted on by an outside force – provided perhaps by a battery. But in a piece of iron in a bar magnet, electrons remain normally attached to the rest of the atom. They rotate or spin and at the same time circulate around the atomic nucleus. Both rotation and circulation are like electric currents, their "orbits" being like electric circuits. In most substances these currents are negligibly small, but in iron, steel, cobalt, nickel, and special alloys, called Huesler alloys (mixtures of copper, manganese, and aluminum), the currents are large, and each atom of the metal acts like a tiny electric coil. It has a north and a south pole.

Although it is usually said that a current flowing round a coil of wire acts like a magnet, it is perhaps more correct to say that a magnet behaves as though it contains tiny circulating currents.

Iron, steel, cobalt, and nickel are called ferromagnetic substances (see ferromagnetism), and they can all be magnetized strongly. But even these are not normally found in the magnetized state, although the separate atoms are themselves magnetic all the time. It was once thought that this is because the atoms were arranged haphazardly in the substance. Norths and souths cancelled each other's effects under normal circumstances, but when they were placed in a magnetic field the atoms became arranged so that the magnetic poles aligned themselves N-S-N-S-N-S- in the direction of the field.

This theory was, however, unable to explain many other magnetic effects. In fact the atoms in iron do naturally try to align, so that their separate effects reinforce rather than cancel. They become aligned into groups called domains, each domain containing many atoms with atomic magnets all pointing in the same direction (see Figure 3). The domains in a piece of iron are disarranged. If the iron is put into a magnetic field, the forces of attraction and repulsion in the field attract and repel the north and south of each domain. As they become aligned, the piece of iron begins to behave as a whole like a magnet, and sets up its own magnetic field. There is always a limit to the extent the iron can be magnetized. When all of the domains are aligned in the direction of the field the magnet is said to be saturated.

In iron, the domains are fairly easy to align. Generally they need a little extra pushing and shoving and some energy is wasted in the process. This energy loss, called hysteresis loss (see hysteresis loop), is important when, as often happens, the magnet is being continually magnetized and demagnetized. The more hysteresis the magnet shows, the more energy it wastes. If the domains are easily aligned, it follows that they can easily become unaligned when the magnetic field is taken away. An iron nail is picked by a magnet because it is itself made into a magnet by the a magnetic field. It will not hold its magnetism for very long after the field has been taken away, and soon "forgets" that it has ever been magnetized. But in some instances, for example hard steels, the domains are difficult to move, and once they have been shifted, are very reluctant to go back. Such substances are therefore used to make permanent magnets.

In only one naturally occurring substance, lodestone, are the domains permanently (although very weakly) aligned. Lodestone is a shiny black lump of the mineral magnetite (magnetic oxide of iron, chemical formula: Fe3O4). It was practically the only means whereby magnetism could be demonstrated before the discovery of current electricity. In ancient times the Greeks and Chinese found lumps of lodestone, and made other magnets with them by stroking iron with the lodestone in the same direction each time. In doing this they aligned the domains (although they naturally did not known this at the time).


lodestone and the Earth as a magnet

Besides attracting and repelling other pieces of lodestone, a single piece, suspended from a string, showed other remarkable properties. It tended to swing round so that one pole always pointed in the same direction. The "north-seeking" pole always pointed toward the North Pole of the Earth, while the "south-seeking" pole naturally points toward the South Pole. This led William Gilbert, in around 1600, to realize that the Earth itself must be a magnet, its poles, attracting and repelling the poles of the compass needle. The Earth behaves as though it had a powerful bar magnet along its magnetic axis (which is slightly from the axis around which the Earth rotates).

But although the Earth behaves as though it were a bar magnet, this does not mean that it contains a block of permanent magnetic material. Its magnetism actually results from large electric current, caused by the Earth's rotation, circulating in its molten core.

Because the Earth is a magnet, lodestones were not the only means of makings (or of making magnets which could in turn make more magnets). The domains in any ferromagnetic material will become slightly aligned in the Earth's magnetic field. This effect can be increased by hitting the material, helping the domains to move into a north-south orientation. However, a sudden blow can, in the same way, help an already magnetized piece of material to become demagnetized, if the axis of the magnet is pointing in an east-west direction. Heating a magnet has much the same effect as hitting it. It allows he domains to move more, so that they can more easily become arranged or disarranged.

It is far simpler to make a magnet by passing electric current round a coil of wire, and putting a piece of iron into the coil. A very small field will magnetize the iron (align the domains) and thus make a field which will reinforce the field due to the coil, multiplying it about a hundred times.

A coil of wire actually wrapped round a piece of ferromagnetic material is called an electromagnet. It is more convenient than a permanent magnet for attracting and picking up pieces of iron, because the electromagnet can be switched on and off as the current flowing around the coil is switched on and off. Electromagnets are used in electric motors, dynamos, and solenoid switches (relays) because of their property of attracting other magnets (or for that matter other coils around which current flows).