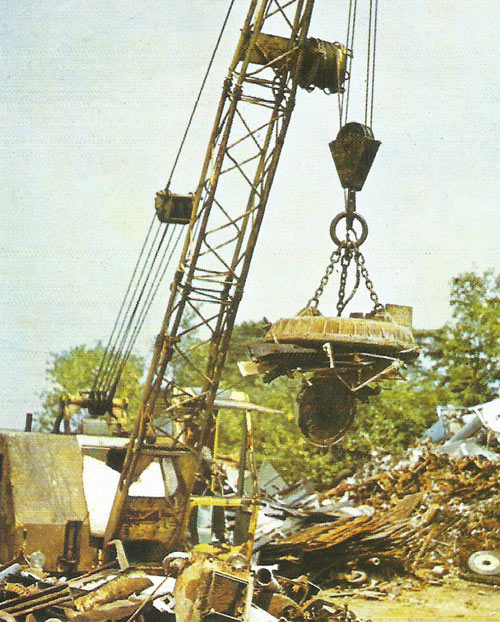 Electromagnets are often used in scrap metal yards to lift ferrous metals. This method not only reduces manhandling but also provides a means of separatingthe iron from other scrap materials.

An electromagnet is a magnet constructed from a soft iron core around which is wound a coil of insulated wire. A magnetic field is set up when an electric current is passed through the wire; it is reinforced and concentrated by the core because of its high permeability. The field disappears when the current is switched off.

An electromagnet can be made stronger in different ways, including: wrapping the coil around an iron core, adding more turns to the coil, and increasing the current flowing through the coil. The magnetic field around an electromagnet is the same as that around a bar magnet. However, it can be reversed by turning the battery around.


History of the electromagnet

The electromagnet developed from a series of observations. In 1820 Hans Oersted discovered that a current-carrying wire set up a magnetic field. In the same year, André-Marie Ampère discovered that a helix of wire acted like a permanent magnet, and François Arago found that an iron or steel bar could be magnetized by putting it inside the helix of current-carrying wire. Finally, William Sturgeon found that leaving the iron inside the coil greatly increased the resulting magnetic field. Sturgeon also bent the iron core into a U-shape to bring the poles closer together, thus concentrating the magnetic field lines. Sturgeon insulated the iron and wound bare wire on it, but Joseph Henry took the final step of insulating the wire. His largest electromagnet, built in 1832, could lift 3,600 lb.