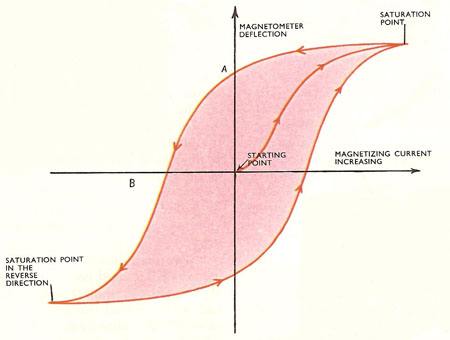 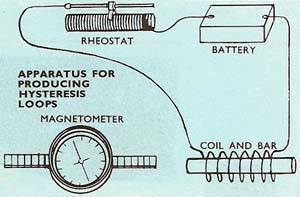 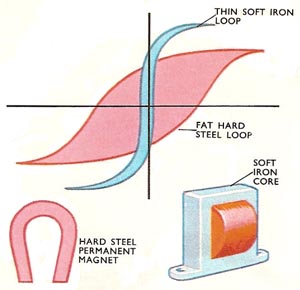 Fig 2. Steel has a "fat" hysteresis loop. It is difficult to demagnetize, so steel is used for permanent magnets. Substances, such as soft iron, with thin hysteresis loops, are used for transformer cores. 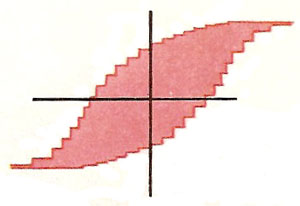 Fig 3. Hysteresis loops are not really smooth, as the iron is magnetized in little steps, each one the movement of a domain.

A hysteresis loop is a closed curve obtained by plotting a graph of the magnetic induction of a ferromagnetic substance (as ordinate) against the external magnetic field (Figure 1). The shape of the curve is characteristic of the magnetic properties of the material and shows the ease with which it is magnetized and the ability to retain magnetization.

When an electric current is passed through a coil of wire, the coil acts like a bar magnet with a north pole at one end and a south pole at the other. In other words, it acts like an electromagnet. If a bar of soft iron is placed inside the coil, the strength of the electromagnet is much increased. This is because the piece of soft iron is itself converted into a magnet by the effect of the current in the coil, and the strength of the magnet is added to that of the coil "magnet."

This effect can be demonstrated in a series of simple experiments. An electric current is passed through the coil of wire, and an instrument which measures strengths of magnetic fields, a deflection magnetometer, is placed some distance from the solenoid, along the axis of the coil. As the current through the coil is increased, the deflection of the magnetometer needle increases, showing that the magnetic field around the coil is increasing.

By putting an iron bar in the coil, the magnetometer deflection is found to be very much greater. This shows that the combined magnetic field of coil and bat are much greater than the field of the coil itself.

Electromagnets, which are simply iron bars with a coil of wire wrapped round them, are often used in electric motors, and in many other kinds of electric machinery. They are used because they can provide very strong magnetic fields, controllable just by switching the electric current on and off. Generally speaking, the bigger the current, the more powerful the electromagnet.

Many electromagnets are powered by alternating current (AC). The current increases in one direction up to a maximum, then decreases to zero and starts to increase in the opposite direction. It reaches its maximum in this direction, and then drops back again to zero. Current from the AC mains repeats this and to-and-fro cycle 50 or 60 times a second.

Energy losses are always important in electric machinery. Obviously they must be reduced as much as possible if the machine is to work efficiently as possible. This is why hysteresis is so important.


Investigating hysteresis in the lab

Hysteresis can be investigated using simple laboratory apparatus – a source of direct current, a deflection magnetometer, and a coil of wire to wrap around the iron bar under investigation (Figure 2). The direct current is increased step by step in one direction, then decreased to zero and increased in the other direction. This is rather like pushing one complete cycle of alternating current through the coil, but the steps are slowed down so that the behavior of the magnet can be studied (with the magnetometer) at each stage. The results are plotted on a graph with the current supplied to the coil along the horizontal (x) axis and the magnetometer deflection (a measure of the strength of the electromagnet produced by the current) along the vertical (y) axis.

The "fatness" of the loop is a measure of the amount of energy wasted in changing the direction of magnetization (i.e., the hysteresis loss). Soft iron hysteresis loops are thin, because soft iron is easily magnetized, demagnetized, and remagnetized in the opposite direction. Steel loops, on the other hand, are fat because steel is far more reluctant to change its direction of magnetization.

Why is there a maximum saturation value of the magnetism of the magnet, and what is happening inside it to cause hysteresis? The answer is that the iron bar is made up of thousands of tiny magnets, and when the bar is unmagnetized, the magnets are pointing in all directions, so that their effects cancel each other. The magnets are the individual atoms of iron, but groups of many atoms called domains. Each atom of iron acts like a magnet, with its own north and south pole. In a domain the atoms are arranged in an orderly fashion, so that they reinforce each other. The domain acts like a magnet, but in unmagnetized soft iron the directions of magnetizations of groups of domains are so arranged that their effective magnetization is zero.

As the current is increased, one domain after another swivels around. It is found that the amount of magnetization does not increase smoothly (as indicated by the hysteresis loop), but in tiny steps as the direction of magnetization of each domain swivels round into line (Fig 3). When the magnetic field suddenly changes in this way, it gives rise toelectromagnetic radiation in the radio wave region of the spectrum. This wave can be picked up, amplified, and turned into an audible sound. It is possible to actually listen to the movement of the domains. Each domain movement is heard as a faint click. This is called the Barkhausen effect.

The domains are not entirely free to swivel around. Hysteresis is a measure of the amount of magnetic "friction" they have to overcome. While most of the electrical energy from the electric current is stored as the magnetic energy of the piece of iron and is available for use, the hysteresis loss cannot be reclaimed. As with most kinds of "friction" energy, it is converted into heat.