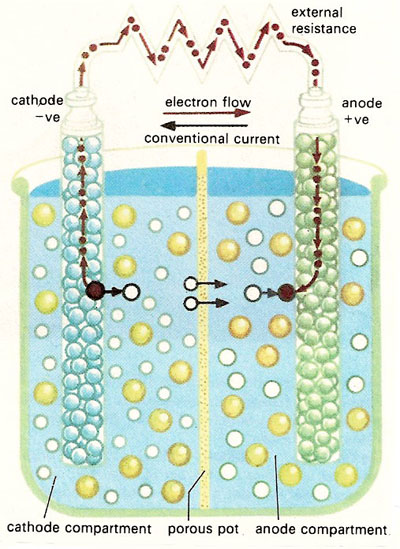 Schematic diagram of a Daniell cell with zinc cathode (blue spheres), copper anode (green spheres), dilute sulfuric acid (gray circles – H3O+ – and yellow spheres – SO42-) in the cathode compartment, copper sulfate (green circles – Cu2+ – and yellow spheres) solution in the anode compartment , and porous pot separating the two. The fundamental reactions of the cell are demonstrated by the "atoms" picked out in bolder colors. At the cathode, a zinc atom (Zn – blue ring with red center) gives up two electrons (e- – red dot) and, as a zinc ion (Zn2+ – blue circle with white center) enters the cathode solution. The cathode compartment now has a charge excess +2 and so two hydrogen ions (H3O+ – black circle) pass through the porous pot barrier to the anode compartment. This allows a copper ion (Cu2+ – green circle with white center) to accept two electrons from the anode and deposit itself as a copper atom (Cu – green circle with red center) on the anode. The electrons are made available at the anode because electrons from the cathode are allowed to flow through an external circuit to the anode. The energy for the process comes from the overall reaction

and by means of the cell is made available as electricity to do work against a resistance in the external circuit. The conventional current flows in the opposite direction from the actual flow of electrons.

A battery is a device for converting internally-stored chemical energy into direct-current electricity. That is to say, a battery is an energy storage device that uses a chemical reaction to do work on charge and produce a voltage between its output terminals.

The term is also applied to various other electricity sources, including the solar cell and the nuclear cell, but is usually taken to exclude the fuel cell, which requires the continuous input of a chemical fuel for its operation.

Chemical batteries consist of one more electrochemical cells (comprising two electrodes immersed or embedded in a conducting electrolyte) in which a oxidation-reduction reaction takes place when an external circuit is completed between the electrodes. These cells are enclosed in a container and electrically interconnected in an appropriate series/parallel arrangement to provide the required operating voltage and current levels. Most of the energy liberated in this reaction can be tapped if a suitable load is placed in the external circuit, impeding the flow of electrons from the cathode to anode. (The conventional current, of course, flows in the opposite sense.)

Batteries are classified in two main divisions. In primary cells, the chemical reaction is ordinarily irreversible and the battery can yield only a finite quantity of electricity. Single primary-cell batteries are used in flashlights, shavers, light meters, etc. The most common type is the dry Leclanché cell, which has a zinc cathode, a carbon anode, and uses ammonium chloride paste as electrolyte. Manganese dioxide "depolarizer" is distributed around the anode (mixed with powdered graphite) to prevent the accumulation of the hydrogen gas which would otherwise stop the operation of the cell. The dry Leclanché cell gives a nominal 1.54V. For the higher voltage necessary to power radios, etc., batteries containing several thin laminar cells are used.

Secondary cells, known also as storage cells or accumulators, can be recharged and reused at will provided too much electricity has not been abstracted from them. The most common type, as used in automobiles, is the lead-acid type, in which both electrodes are made of lead (the positive covered with lead (IV) oxide when charged) and the electrolyte is dilute sulfuric acid. Its voltage is about 2V, depending on the state of the charge. The robust yet light nickel-iron battery (having a potassium hydroxide solution electrolyte) was widely used in telephone exchanges and other heavy-duty situations but has been displaced by the nickel-cadmium type. They give about 1.3V.

The first battery was the voltaic pile invented in about 1800 by Alessandro Volta. This comprised a stack of pairs of silver and zinc disks, each pair separated by a brine-soaked board. For many years from 1836 the standard form of battery was the Daniell cell, with a zinc anode, a copper cathode, and a porous-pot barrier separating the anode electrolyte (copper (II) sulfate) from the cathode electrolyte (sulfuric acid). The lead-acid storage battery was invented by Gaston Planté in 1859 and the wet Leclanché cell, the prototype for the modern dry cell, by Georges Leclanché in 1865.