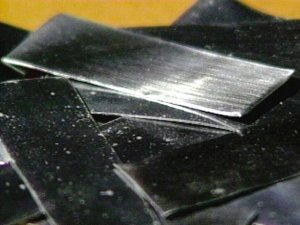 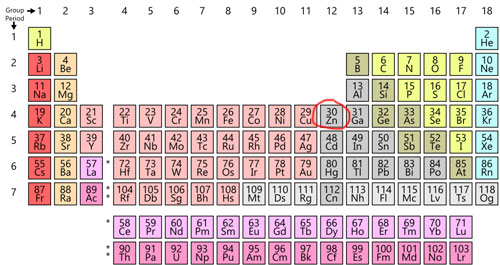 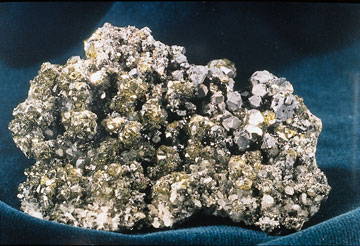 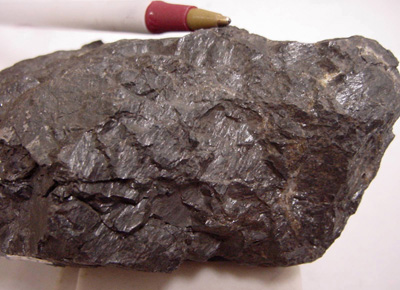 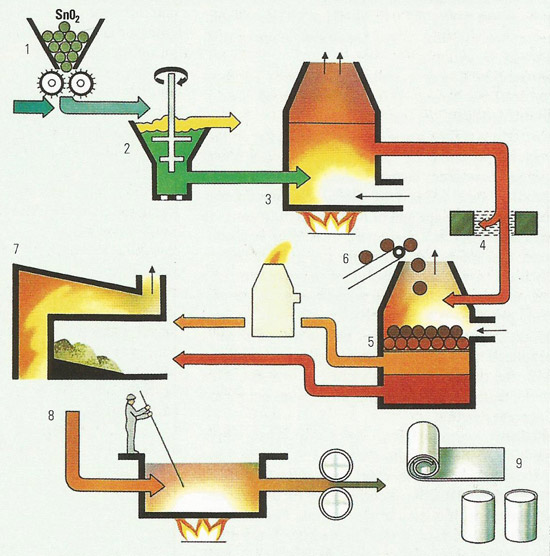 Fig 5. The Imperial smelting process involves the simultaneous production of zinc and lead from a blast furnace. This is of particular value as the two metals frequently occur together in nature as a mixture of lead and zinc sulfides.

Zinc (Zn) is a bluish-gray, lustrous, metallic element in group 12 of the periodic table (Fig 2). It is an anomalous transition element.

Zinc occurs naturally as the ores sphalerite, smithsonite, hemimorphite, and wurtzite, and is extracted by roasting to the oxide and reduction with carbon.

Zinc is brittle at room temperatures but malleable when heated. It is used in the production of a wide variety of alloys including brass, bronze, German silver, various solders, and nickel silver, in galvanizing iron and other metals, for electric fuses, anodes, and meter cases, and in roofing, gutters, and various household objects. Zinc is a vital trace element, occurring in erythrocytes (red blood cells) and insulin.

Sphalerite (Fig 3), also known as zinc blende, is the low-temperature (β) form of zinc sulfide (ZnS). It is the chief ore of zinc, occurring worldwide with galena. Sphalerite forms lustrous, cubic system tetrahedral crystals or granular masses. It is white when pure, but more commonly yellow, black, or brown with a resinous luster. It is often found in hydrothermal veins with galena, and in limestones where it occurs by replacement. Hardness 3.5–4; relative density 4.

Hemimorphite is a colorless or white mineral, formerly, along with smithsonite, known as calamine. It is a hydrated zinc silicate (Zn4Si2O7[OH]2.H2O) of widespread occurrence. Hemimorphite is an ore of zinc formed by alteration of other zinc minerals. It crystallizes in the orthorhombic system and exhibits the piezoelectric effect.

Smithsonite is a white, yellow, green, or blue mineral consisting of zinc carbonate (ZnCO3). Smithsonite occurs widely, an ore of zinc formed by alteration of other zinc minerals and commonly associated with sphalerite, hemimorphite, galena, and calcite. Its crystals, which are rare, are rhombohedral in the trigonal system; it usually occurs in masses. Blue specimens from New Mexico have been used as gemstones. It is named for the British chemist James Smithson, after whom the Smithsonian Institution is also named. Hardness 4–4.5; relative density 4.4.

Wurtzite is the high-temperature (α) form of zinc sulfide (ZnS), a minor ore of zinc which reverts to sphalerite. It forms brown-black pyramidal crystals in the hexagonal system (Fig 4). It occurs in Bolivia, Montana, and Nevada.

Galvanizing is the coating of iron or steel articles with zinc, either applied directly in a bath of molten zinc, electroplated (see electroplating) from cold zinc sulfate solution, or dusted on and baked. Corrugated sheets, nails, pails, and wire netting may be protected from the corrosive effects of rusting by galvanizing. The metal to be protected is first derusted but if, after galvanizing, the zinc coating is pierced, protection is still provided because of the preferential attack by corrosion on zinc rather than on iron.

Sherardizing is another industrial method of coating steel parts with zinc for protection from corrosion. The parts, which may be steel castings, nuts and bolts, welded tubes or sections, are tumbled in heated drums containing zinc dust. After some hours the zinc forms a very thin intermetallic surface coating on the steel.

Chemically zinc is reactive, readily forming divalent ionic salts (Zn2+), and zincates (ZnO22-) in alkaline solution; it forms many stable ligand complexes. Zinc chloride is used as a flux, for fireproofing, in dentistry, and in the manufacture of batteries and fungicides. Zinc oxide and sulfide are used as white pigments. Additionally, zinc oxide is an ingredient of many skin preparations that has a mild astringent (dying) action and a soothing effect. Zinc oxide is used to treat painful, itchy, and moist skin (such as eczema, bedsores, and diaper rash). It also blocks the ultraviolet rays of the sun.

Zinc is a trace element (second only to iron in its concentration in the body) that is essential for normal growth, development of the reproductive organs, normal function of the prostate gland, healing of wounds, and the manufacture of proteins and nucleic acid. Zinc is a cofactor that controls the activities of more than 100 enzymes and is involved in the functioning of the hormone insulin. The average human body contains about 2 g of zinc and takes in about 20 mg per day.

Small amounts of the element are present in a wide variety of foods; particularly rich sources include lean meat, wholemeal breads, whole grain cereals, dried beans, and seafoods. Beef, pork, and lamb contain more zinc than fish does. The dark meat of a chicken has more zinc than the light meat.

Calamine is the former name of two zinc minerals, smithsonite (naturally-occurring zinc carbonate) and hemimorphite (hydrated zinc silicate). In medicine, calamine lotion (a pink powder of zinc carbonate and some ferric oxide dissolved in mineral oils) is a mild astringent used in the form of a lotion, cream, or ointment to treat eczema, chickenpox, and other itchy skin diseases. For the treatment of psoriasis it is included in a coal tar preparation.

Zinc deficiency is rare, most cases occurring in people who are generally malnourished. Deficiency may also be caused by any disorder that causes malabsorption, by acrodermatitis enteropathica (a disorder of zinc absorption), or by increased zinc requirements due to cell damage (for example, as a result of a burn or in sickle cell anemia). Symptoms of deficiency include impairment of taste and loss of appetite; in severe cases, there may also be hair loss and inflammation of the skin, mouth, tongue, and eyelids.

Prolonged, excessive intake of zinc (usually through supplements) may interfere with the intestinal absorption of iron and copper, leading to a deficiency of these minerals and resultant symptoms of nausea, vomiting, fever, headache, tiredness, and abdominal pain.