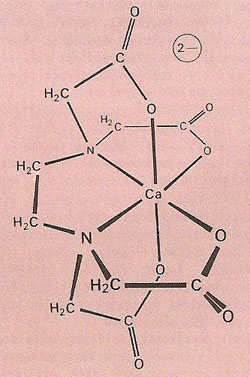 A ligand is an ion, molecule, or group of atoms linked to a central metal ion to form a so-called complex compound. Almost any ion or molecule that can act as a base, having an atom able to donate an electron-pair, may act as a ligand – common examples include water (H2O), ammonia (NH3), chloride ion (Cl–), hydroxide ion (OH–), carbon monoxide (CO), SO42–, NO+, H–, C5H5–, and CH3COO–. The complex formed may be cationic, uncharged, or anionic.

Many complexes with more than one kind of ligand have stereoisomers. Complexes vary greatly in their lability, i.e., the rapidity with which the ligands are replaced by others: they are described as labile or inert.

The bonding in complexes has been described by several theories: crystal field theory considers the effect that the electrostatic field due to the ligands has on the energies of the central ion d-orbitals; ligand field theory includes the mixing of ligand and ion orbitals.