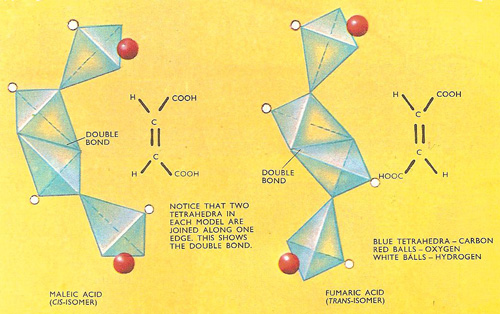 Fig 1. Geometrical (cis-trans) isomers. This type of isomerism may occur when there is a restriction on rotation within the molecule and is often caused by two carbon atoms being linked by a double bond. In the three-dimensional model, the double bond is indicated by the two tetrahedra being joined along one edge. These models of malic and fumaric acid show that in malic acid (cis-isomer) the carboxyl (–COOH) groups attached to the carbon atom are adjacent, while in fumaric acid (trans-isomer) they are on opposite sides of the molecule. 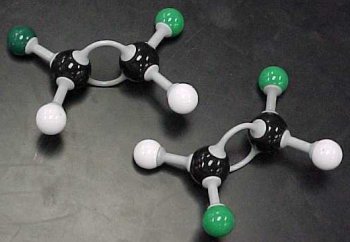 Fig 3. Optical isomers. An asymmetric carbon atom has a different atom or group attached to each of its four valence bonds. Lactic acid contains one asymmetric carbon atom and as will be seen from the models, the hydrogen (–H), hydroxyl (–OH), methyl (–CH3), and carboxyl (–COOH) groups can be arranged in two different ways around this central carbon atom. These two isomers, whose structures are mirror images of one another, rotate the plane of polarization of polarized light in different ways – i.e. they are optically active.

Stereoisomers are isomers that have the same molecular structure, but differ in the spatial arrangement of their atoms. There are two main types.

Optical isomers are asymmetric molecules – usually having an asymmetric carbon atom with four different groups bonded to it – which consequently have two mirror-image forms (enantiomers) and show optical activity. Absolute spatial configurations have now been found for many isomers, and may be represented by projection formulae. Resolution, i.e., separation of the two enantiomers, is achieved by combining them with a single optical isomer, thus producing a pair of diastereoisomers which, not being mirror-images, have different properties and are separable. Inversion of configuration often occurs in substitution reactions.

Geometrical or cis-trans isomers contain groups which are differently oriented with respect to a double bond or ring where rotation is impossible; they have different properties.

Unlike structural isomers, stereoisomers have the same functional groups attached to the same carbon atoms. It may seem strange that two or more chemical compounds with different properties can exist in this way. It is possible, however, because the various atoms or groups of atoms can sometimes be arranged in different ways around the framework of carbon atoms. Although it is often convenient to show the arrangement of atoms in the molecule of any organic compound by a two-dimensional drawing (many carbon atoms are then surrounded by four valence bonds at right angles to each other), this can lead to false conclusions. A better model is achieved by regarding the four valence bonds as the four vertices (corners) of a tetrahedron (a pyramid with four triangular faces).

In the compound ethylene dichloride, for example, the two carbon atoms are linked by single valence bonds. One chlorine atom and two hydrogen atoms occupy the remaining valence bonds of each carbon. A two-dimensional diagram may lead one to conclude that two arrangements of the chlorine atoms are possible, but a three-dimensional model quickly disposes of this theory. Rotation about the single bond is possible, so that the chlorine atoms (one attached to each carbon atom) can take up any position in relation to one another.

The situation is rather different, however, if a pair of carbon atoms are linked by a double bond (Fig 1 and 2). In the three-dimensional model this is represented by having two edges of the tetrahedron touching, and as a consequence, these two carbon atoms are no longer free to rotate in relation to one another. So, there are two different arrangements, and hence two different compounds are possible.

Geometrical or cis-trans isomerism, as this is called, is exhibited by malic acid and fumaric acid. Analysis has shown that both acids consist of two (CH.COOH) units linked through the carbon atoms of the CH groups by a double bond, but although they have the same structural formula they have different properties. Malic is very soluble in water and melts at 130°C. Fumaric acid, however, is only slightly soluble in water and has a much higher melting point (287°C).

When heated in a steam bath with acetyl chloride , malic acid readily loses water to yield an anhydride, while fumaric acid has to be heated much more strongly before water is expelled. When eventually this occurs, the same anhydride is produced as is obtained from malic acid. As a result of this and other experiments it has been deduced that the two carboxyl (–COOH) groups must be situated on the same side of the molecule in malic acid, while they are on opposite sides in fumaric acid. This explains how water can be eliminated quite easily from malic acid (the two –COOH groups are close together). The isomer with two similar groups on the same side of the double bond (e.g. malic acid) is called the cis-isomer, while in the trans-isomer (e.g. fumaric acid) similar groups are on opposite sides.

A carbon atom to which four different atoms or groups are attached is said to be an asymmetric carbon atom, and another type of isomerism – optical isomerism – occurs in compounds containing one or more of these atoms (Fig 3). In this instance, however, the chemical and almost all the physical properties of the isomers are the same.

There is, however, one important difference, namely their effect on polarized light. Solutions of a pair of optical isomers rotate the plane of polarization of polarized light in different directions. The isomer which causes the plane to rotate in a clockwise sense (i.e. to the right) is said to be dextrorotatory while the other isomer which rotates the plane to the left (i.e. anticlockwise) is levorotatory. This optical effect is similar to that produced by crystals (but not solution) of calcite (calcium carbonate), sodium bromate, and sodium iodate.

One of the simplest compounds that contains an asymmetric carbon atom is lactic acid, which is present in sour milk. the four groups attached to the central carbon atom are hydrogen (–H), hydroxyl (–OH), methyl (–CH3), and carboxyl (–COOH), and they can be arranged in two different ways around the tetrahedron. Furthermore it will be seen from the diagrams that the two models are mirror images of one another. This is, in fact, a test which can be applied to any pair of structural formulae to find if they are optical isomers.

However, many substances taking part in chemical processes in living things are optically active, either the d- (dextro-rotatory) or the l- (levorotatory) form of the compound predominates. For example, the sugars found in nature are usually of the d-form, while the l-form of amino acids is frequently present in large quantities. Most enzymes (organic catalysts) show strong specificity for either the d- or the l-form, but not both. Among the processes which occur in the liver, the enzyme arginase acts on the amino acid l-arginine (but not on the d-form) to produce l-ornithine and urea.

A racemic mixture, also called a racemate, is a mixture of equal quantities of the dextrorotatory, d-, or (+) and levorotatory, l-, or (-), forms of an optically active compound. Such a mixture shows no optical activity. Racemic mixtures are denoted by the prefix (±) or dl-.

Racemization is a chemical reaction in which an optically active compound is converted into a racemic mixture.