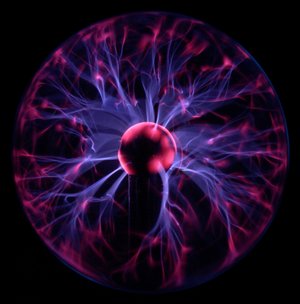 A "plasma ball" in which a strong electric field causes ionization and sparks in gas. 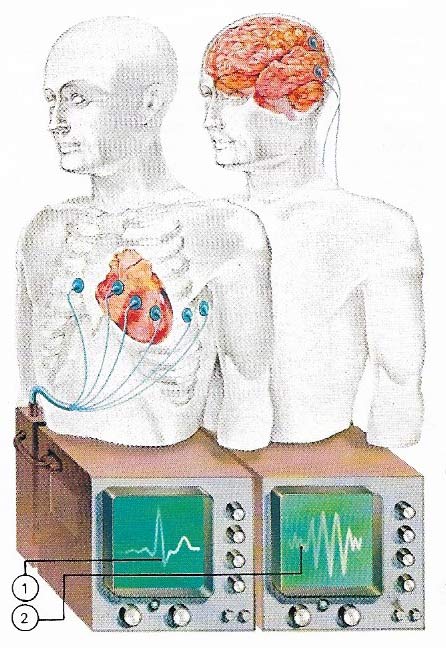 The beating heart generates tiny electrical currents which, after being suitably amplified, can be displayed on a cathode-ray tube. These current shapes can be recorded permanently on paper, in which form they are called electrocardiograms for the heart (1) and electroencephalograms (2) for the brain. Existing or potential malfunctions of both these vital organs can be diagnosed with their aid.

Electricity is the phenomenon of charged particles at rest and in motion. Electricity provides a highly versatile form of energy, electrical devices being used in heating, lighting, machinery, telephony, and electronics.

Electric charge is an inherent property of matter, electrons carrying a negative charge of 1.602 × 10-19 coulomb and atomic nuclei normally carrying a similar positive charge for each electron in the atom. When the balance is disturbed (in the case of glass, by rubbing it, for example), a net charge is left on an object, and the study of such isolated charges is called electrostatics.

Like charges repel and unlike charges attract each other with a force proportional to the two charges and inversely proportional to the square of their separation (the inverse square law): electrostatic repulsion being, for example, is familiar in newly combed hair. The force is normally interpreted in terms of an electric field produced by one charge with which the other interacts. The fields produced by any number of charges may be superposed independently, and the result conveniently represented graphically by field lines, beginning at positive and ending at negative charges, showing by their direction that of the field, and by their density its strength. Pairs of equal but opposite charges separated by a small distance are called dipoles, the product of charge and separation being called the dipole moment. These experience a torque in an electric field tending to align them with the field, but no net force unless the field is nonuniform.

The amount of work done in moving a unit charge from one point to another against the electric field is called the electric potential difference or voltage between the points, and is measured in volts. The ratio of a charge added to a body to the voltage produced is called the capacitance of the body; for most practical purposes, the Earth provides a reference potential with an infinite capacitance.

In some materials, known electric conductors, there are charges free to move about – for example, valence electrons in metals, or ions in salt solutions – and in these, the presence of an electric field produces a steady flow of charge in the direction of the field (negative charges moving the opposite way); such a flow constitutes an electric current, measured in amperes. The field implies a voltage between the ends of the conductor, which is normally proportional to the current (see Ohm's law), the ratio being called the resistance of the conductor, and measured in ohms; it normally rises with temperature. Materials with high resistance are called as insulators. (See also semiconductor; dielectric).

The energy acquired by the charges in falling through the field is dissipated as heat – and light, if a sufficient temperature is reached – the total power output being the product of current and voltage. Thus, for example, a 1kW fire supplied at 110V draws a current of about 9A, and the hot element has a resistance of about 12Ω.

Electric sources such as batteries or generators convert chemical, mechanical, or other energy into electrical energy (see electromotive force, and will pump charge through conductors much as a water pump circulates water in a radiator heating system (see electric circuit). Batteries create a constant voltage, and so produce a steady direct current (DC); many generators on the other hand provide a voltage which changes in sign many times a second, and so produce an alternating current (AC) in which the charges move to and fro instead of continuously in one direction. This system has advantages in generation, transmission, and application, and is now used almost universally for domestic and industrial purposes.

Static electricity was known to the Greeks; the inverse square law was hinted at by Joseph Priestley in 1767 and later confirmed by Henry Cavendish and Charles Coulomb. G. S. Ohm formulated his law of conduction in 1826, though its essentials were known before then. The common nature of all the types of electricity then known was demonstrated by Michael Faraday, who also originated the concept of electric field lines. For more, see the history of electricity article.