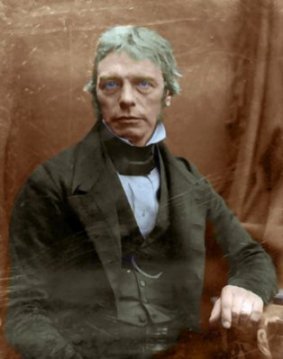 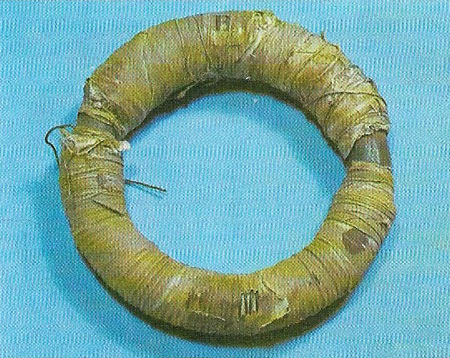 Faraday's "ring" was constructed for a central experiment in the work of Michael Faraday on the nature of electromagnetism, in London in 1831. He knew that electricity flowing along a wire had an associated magnetic field and he argued that a magnet should create (by induction) an electric current in a wire placed near it. He showed that this could happen if the magnet was moving, and with this apparatus discovered self-induction.

Michael Faraday was a British physicist and chemist, one of the most outstanding experimentalists in all science, who among many achievements built the first electric motors, dynamos (see generator), and transformers; laid the foundations for the science of electromagnetism; established the laws of electrolysis, and discovered benzene. Born at Newington Butts, near London, the son of a blacksmith, Faraday received no formal education. At 13 he was apprenticed to a bookbinder; reading the many volumes on which he was working gave him a thirst for scientific knowledge. He began to devote his leisure time to science, and experimented with an electrical machine of his own devising.

Chance having allowed him admission, in 1812, to the chemical lectures of Humphry Davy, the latter engaged him as his assistant at the Royal Institution. He traveled to the Continent with Davy, as his assistant and amanuensis, meeting many of the great scientists of the day during a one-and-a-half year excursion. On their return to London Davy confided to Faraday the results of certain experiments, which led in his hands to the condensation of gases into liquids. In 1827 Faraday succeeded to Davy's chair of Chemistry at the Royal Institution.

Among Faraday's great achievements in chemistry were his liquefaction of chlorine, carbon dioxide, and other gases; his discovery of two compounds of chlorine with carbon, C2Cl4 and C2Cl6 (1821), alloys of steel (1822), compounds of hydrogen and carbon, including benzene (1825), and the action of sulfuric acid on naphthalene; his decomposition of hydrocarbons by expansion; and a series of experiments, in 1829-30, on the manufacture of glass for optical purposes.

From about 1830, Faraday shifted increasingly to the study of electricity and magnetism, beginning with his discovery of the laws of electrolysis. These two laws can be stated as follows:

1. The weight of a substance set free during electrolysis is proportional to the size of the current which passes and the time for which it passes.

2. The weight of a substance set free during electrolysis is proportional to the equivalent weight of the substance

Faraday was responsible for introducing many of the terms connected with electrolysis, including electrolysis itself, electrolyte (the liquid through which the current is passed), electrode, and anode and cathode (the positive and negative electrodes, respectively). These terms were invented for Faraday by a friend, William Whewell.

The Danish physicist Hans Oersted had shown that an electric current could produce a magnetic field; Faraday reasoned that the reverse ought to be true. This led him to discover (independently of the American physicist Joseph Henry) electromagnetic induction. Having grasped the principle of induction, Faraday went on to devise simple electric motors, a dynamo, and a transformer. He also helped physicists move away from the old notion of electricity as a kind of fluid, and showed that whether one was dealing with a voltaic cell, an electrostatic machine, or a dynamo, the electricity involved in each case was fundamentally the same. He investigated capacitors and the properties of dielectrics, and discovered diamagnetism. The unit of capacitance, the farad, is named after him, as also is the effect known as Faraday rotation since he was the first to show that polarized light is affected by a magnetic field.

Faraday was a brilliant and captivating speaker who did much to educate lay audiences in the latest scientific work. The Royal Institution Christmas lectures, which he initiated in 1826, continue (and are televised) to this day. On one occasion, in 1846, the physicist William Wheatstone was due to speak at the Institution but withdrew at the last moment. Faraday stepped in with an impromptu lecture called "Thoughts on Ray Vibrations," which James Clerk Maxwell later cited as his inspiration for the electromagnetic theory of light.