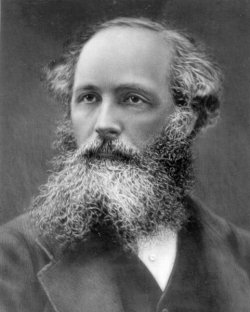 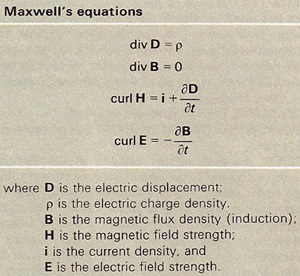 Maxwell also theoretically established (correctly) the nature of Saturn's rings, and did further work in thermodynamics and statistical mechanics. A unit of magnetic flux, the maxwell, was named after him but has now been superceded by the SI unit, the weber.

Maxwell was the only son of John Clerk Maxwell of Middlebie in Dumfriesshire, and was born at Edinburgh. As a boy he was educated at the Edinburgh Academy. His first published scientific paper was read for him by Professor Forbes to the Royal Society of Edinburgh before he was fifteen. He spent three years at the University of Edinburgh; and during this time he wrote two valuable papers, "On the Theory of Rolling Curves," and "On the Equilibrium of Elastic Solids." He went to Cambridge in 1850, obtained in 1854 the position of second wrangler. In 1856 he became a professor in Marischal College, Aberdeen, and in 1860 in King's College, London. He had been successively Scholar and Fellow of Trinity, and was elected an Honorary Fellow of Trinity when he finally became in 1871 professor in experimental physics in the University of Cambridge.

The great work of his life is his treatise on Electricity and Magnetism (2 vols., 1873). His great goal was to construct a theory of electricity in which action at a distance should have no place, and in this he was successful, laying the basis of a physical theory of electricity and magnetism phenomena. He also devoted much effort to the perception of color, the three primary color-sensations, and the cause of color blindness, and was the first to make color-sensation the subject of actual measurement. He won the Adams prize for his discussion of the dynamical conditions of stability of the ring-system of Saturn. But he was perhaps best known to the public in his time for his investigations of the kinetic theory of gases. His Bradford "Discussion on Molecules" is a classic in science.

In 1867, Maxwell created a thought experiment to show that it would be philosophically possible to contradict the second law of thermodynamics, which says that closed systems (those isolated from outside stimuli) always tend toward equilibrium (maximum entropy), so that when a hot liquid and a cold liquid are mixed, for example, the result will be a lukewarm liquid in which all molecules are at the same temperature.

Imagine a box, divided in two by a wall, that contains a mixture of "hot" (fast-moving) and cold (slow-moving) gas molecules. An imaginary creature (named Maxwell's demon) crouches by a door in the wall, opening and closing it to ensure that cold molecules end up on the one side of the wall and hot molecules on the other. A heat engine could be run by allowing the hot molecules to run through into the cold side. Similarly, energy could be created by getting all the molecules into one side of the box, then operating a turbine in the doorway, over which the gas would flow from the "full" to the"empty" side of the box.

Recently, Maxwell's demon has acquired applications in information theory. In a Japanese experiment, a particle was moved to a higher energy state by observing the particle's path toward a low-energy state. The possibilities of this are exciting, even if we are still a long way from generating significant amounts of energy using this method. The experiment suggests that philosophical reflection can be as important as scientific empiricism.