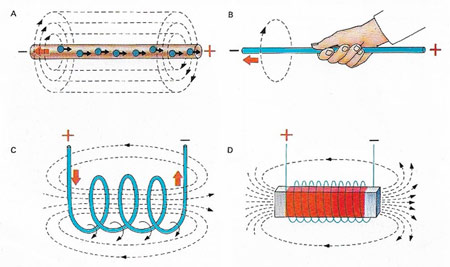 The number of lines of force drawn – dotted lines in B, C, and D – by convention, represents the strength of the magnetic field. The direction of the field can be found by following the 'right hand grip rule' (B), that is, when the wire is held in the right hand with the thumb pointing in the direction of the current flow – conventionally opposite to that of the electron flow – the curled fingers indicate the field direction. If the wire is bent the field follows the change in shape. When the wire is wound, in a coil or solenoid, the force lines of the field all point in the same direction through the center of the coil; overall, the field resembles that produced by a bar magnet with the north pole, in this example, on the right. If an iron bar is inserted into the core of the solenoid, the lines of force prefer to remain within it and this results in a high concentration of lines at the end of the bar. This device, called an electromagnet, can produce a very strong magnetic field which varies with the current in the wire, the number of turns in the solenoid and its cross-sectional area.

A magnetic field, for example, is generated when electrons move. To determine the shape of the field the direction in which the 'free' north pole of a small compass moves, at various points within the field, is noted. When current flows at uniform velocity along a wire the magnetic field produced is a set of concentric rings in any plane drawn at right-angles to the wire.