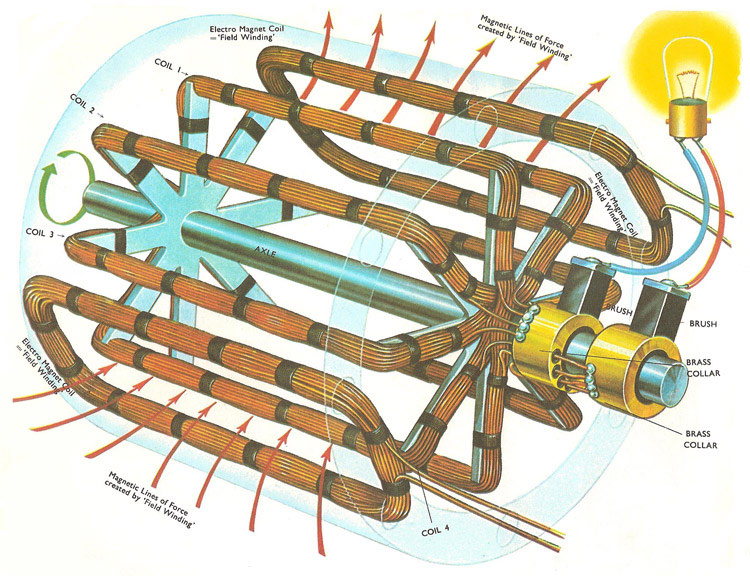 Fig 1. A practical generator. In this diagram the iron core that fills the space between the axle and the rotating coils has been removed for clarity. The magnetic field is provided by the two electromagnet coils ('field windings') which also have iron cores.

Fig 2. A simple generator. On the right the coil is seen from the end making one complete revolution. The size of the current in each of the eight stages varies as shown by the curve. At 'e' (coil vertical) the current reverses. 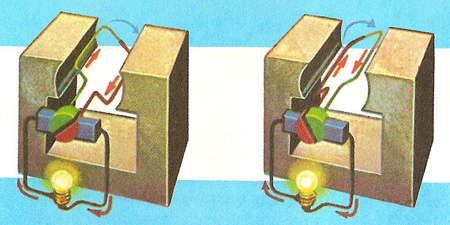 Fig 4. Although the commutator ensures that current always flows in the same direction, it does not prevent the current from falling to zero each time the coil reaches the vertical position. No current is produced when the coil is vertical because it moves along the lines of force instead of cutting across them. With a number of coils it is possible to have the current in one reaching a maximum when the current in another is zero. The commutator in that case consists of several pairs of segments arranged around the axle instead of the two halves of the split ring. The segments are insulated from each other, and the ends of each coil are connected to opposite segments.

Generators originated with the discovery of induction by Michael Faraday in 1831; the considerable advantages of electromagnets over permanent magnets were first exploited by E. W. von Siemens in 1866.

The generator shown above was devised in 1883 by the Frenchman Hippolyte Pixii. It consisted of a horseshoe magnet set on end between two coils. The magnet was rotated through a gear system driven by a hand crank. As the magnet rotated, an alternating voltage was induced in the coils. A commutator, added later, enabled positive voltage to be picked off one side, and negative off the other, to produce direct current.


Principle of the generator

Traditional forms are based on inducing electric fields by changing the magnetic field lines through a circuit (see electromagnetic induction). All generators can be, and sometimes are, run in reverse as electric motors.

In practical designs (see top illustration), the rotor is usually an electromagnet driven by a direct current obtained by rectification of a part of the voltage generated, and passed to the rotor through a pair of carbon brush/slip ring contacts (Fig 3). The use of three sets of stator coils 120° apart allows generation of a three-phase supply (see also armature).

A generator that produces direct current is also known as a dynamo. Simple DC generators consist of a coil rotating in the field of a permanent magnet: the voltage induced in the coil alternates at the frequency of rotation, but it is collected through a commutator – a split-ring broken into two two semicircular parts, to each of which one end of the coil is connected, so that the connection between the coil and the brushes is reversed twice each revolution – resulting in a rapidly pulsating direct voltage. A steadier voltage can be achieved through the use of multiple coil/commutator arrangements, and except in very small generators, the permanent magnet is again replaced by an electromagnet driven by part of the generated voltage.

For large-scale generation, the mechanical power is usually derived from steam turbines, or from dam-fed water turbines, and the process is only moderately efficient. The magnetohydrodynamic generator avoids this step and has no moving parts either. A hot conducting fluid (treated coal gas, or reactor-heated liquid) passes through the field of an electromagnet, so that the charges are forced in opposite directions producing a DC voltage. In another device, the electrogasdynamic generator, the voltage is produced by by using a high speed gas stream to pump charge from an electric discharge, against the electric field, to a collector.