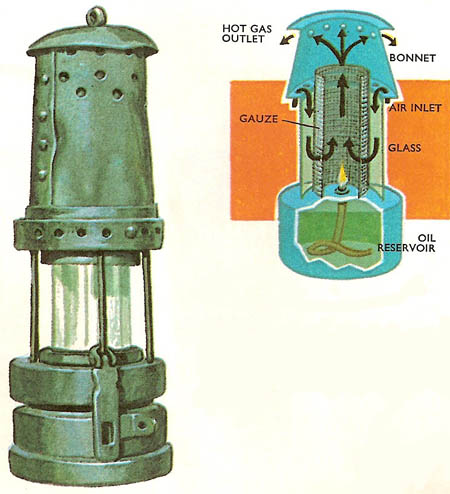 (Left) An early Davy safety lamp, where the upper part is encased in gauze. (Right) Diagram of a more recent Davy lamp.

Humphry Davy was a British experimental chemist and physicist who pioneered the study of electrochemistry, invented the Davy miner's safety lamp, discovered calcium, isolated various other elements (including potassium, sodium, barium, and boron), proved that chlorine is an element, and investigated the anesthetic effects of nitrous oxide (laughing gas) using himself as a subject. His early work on nitrous oxide was done at Bristol under T. Beddoes but most of the rest of his career centered on the Royal Institution in London. He was made a knight in 1812 and later a baronet, and was appointed president of the Royal Society in 1820. He encouraged the brilliant experimental skills of Michael Faraday, and together with Faraday spent much of his later years concerned with research in electromagnetism. From his Bristol days Davy was a friend of Samuel T. Coleridge.

Early in the 19th century mine disasters caused by the accidental ignition of methane gas were common. Davy realized that the problem of designing a safety lamp for use in mines centered on the intake of oxygen and the dispersal of heat. A flame must have oxygen in order to burn, but the heat generated by the flame will normally ignite any combustible gases around it. With characteristic ingenuity Davy decided to enclose the flame of an oil lamp within a barrier of wire gauze. The result was that air could reach the flame, whilst the heat produced by burning was largely dissipated before the spent air came into contact with gases outside the lamp. The light of the flame, though slightly dimmed by the gauze, was still adequate. In later versions of the lamp precautions were taken to ensure that the gauze could not be removed while the lamp was alight.

Davy's widely-read book, Consolations in Travel, or The Last Days of a Philosopher, revealed some extraordinary personal beliefs concerning extraterrestrial life. Published posthumously, Consolations in Travel recounts a vision, based partly upon dreams, in which Davy describes a universe full of every conceivable kind of life and in which souls migrate from one world to another as they acquire knowledge. It presents a philosophy akin to that of Swedenborg and so impressed Flammarion that he arranged for it to be translated and published in France (1868).