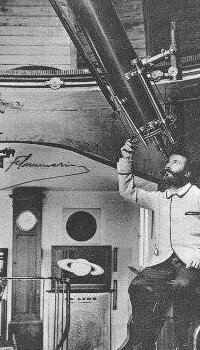 Camille Flammarion was a French astronomer and author of more than 70 books, who did more to encourage public interest in the subject than anyone else of his day, although many of his scientific and philosophical arguments were eccentric. Born in Montigny-le-Roi, he served for some years at the Paris Observatory (beginning in 1858) and at the Bureau of Longitudes, but in 1883 he set up a private observatory at Juvisy, near Paris, and continued his studies, especially of double and multiple stars and of the Moon and Mars. His first book, La pluralities mondes habites (The Plurality of Inhabited Worlds), originally published in 1862, secured his reputation as both a great popularizer and a leading advocate of extreme pluralism. By 1882, it had gone through 33 editions, and continued to be translated and reprinted well into the 20th century.

Flammarion's passionate belief in life on other worlds was nurtured by his readings of previous pluralist authors such as Fontanelle, Cyrano de Bergerac, Huygens, Lalande, and Brewster. He, and another French writer, J. H. Rosny, were the first to popularize the notion of beings that were genuinely alien and not merely minor variants on humans and other terrestrial forms. In his Real and Imaginary Worlds (1864) and Lumen (1887), he describes a range of exotic species, including sentient plants which combine the processes of digestion and respiration. This belief in extraterrestrial life, Flammarion combined with a religious conviction derived, not from the Catholic faith upon which he had been raised, but from the writings of Jean Reynaud and their emphasis upon the transmigration of souls. Man he considered to be a "citizen of the sky," others worlds "studios of human work, schools where the expanding soul progressively learns and develops, assimilating gradually the knowledge to which its aspirations tend, approaching thus evermore the end of its destiny." His linking of pluralism with transmigration, though an old idea, helps explain why these doctrines are often found together in writings from the closing decades of the 19th century.

Flammarion's best-selling work, his epic Astronomie populaire (1880), translated as Popular Astronomy (1894), is filled with speculation about extraterrestrial life. An entire chapter is taken up in arguing the case for lunar life, while Mars he considers "an earth almost similar to ours [with] water, air ... showers, brooks, fountains ... This is certainly a place little different from that which we inhabit." In 1892, he speculated further on the fourth planet in his La planète Mars et ses conditions d'habitabilité though in prose less florid than his earlier work. Concerning the canals of Mars, he is open-minded, suggesting "they may be due to superficial fissures produced by geological forces or perhaps even to the rectification of old rivers by the inhabitants for the purpose of the general distribution of water ..." As to martian life, he concludes "the actual habitation of Mars by a race superior to our own is in our opinion very probable" (see Mars, life on).

Flammarion's fertile imagination moves from romantic science to scientific romance in his Recits de l'infini (1872) and La fin du monde (1893). The former includes several tales which describe the reincarnation of a spirit on other worlds in various alien forms, while the latter has been seen as a precursor to Stapledon's Last and First Men.

His later studies were on psychical research, on which he wrote many works, among them Death and Its Mystery (3 vols., 1920–21). Flammarion earned the amorous attention of a French countess who died prematurely of tuberculosis. Although they never met, the young woman made an unusual request to her doctor, that when she died he would cut a large piece of skin from her back, bring it to Flammarion, and ask that he have it tanned and used to bind a copy of his next book. (The woman also had a picture of Flammarion tattooed on herself!) Flammarion's first copy of Terres du Ciel was bound thus, with an inscription in gold on the front cover: "Pious fulfillment of an anonymous wish/ Binding in human skin (woman) 1882".

In 1919, Camille married his second wife Gabrielle Renaudot (1876–1962) and for six years they worked side by side to promote astronomy in France. After Camille died, Gabrielle continued to maintain Juvisy Observatory and even made arrangements for work to continue after her death. She is buried next to her husband in the observatory park.