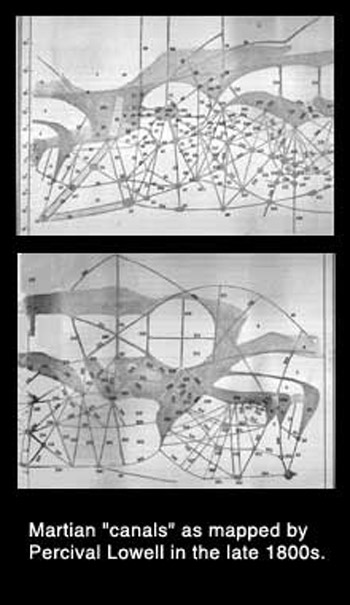 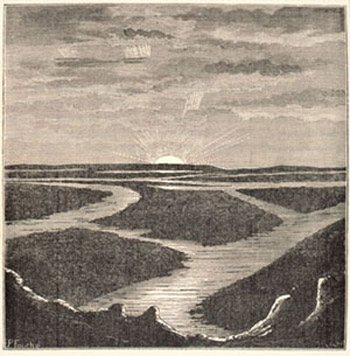 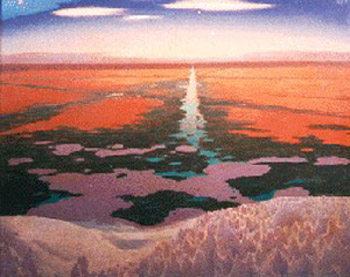 Chesley Bonestell's rendition of the canals. 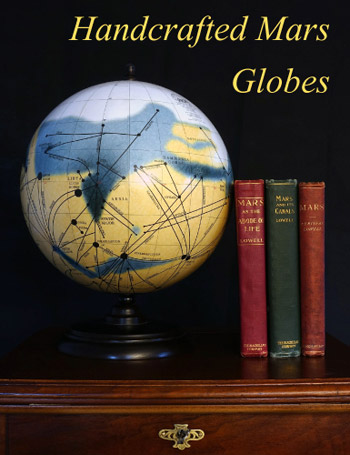 The saga of these elusive waterways began with Schiaparelli's claims following the opposition of Mars in 1877. Schiaparelli used the Italian word canali to describe linear markings that he observed in that year and at subsequent oppositions. He drew increasingly elaborate maps in which the canals became a more and more prominent feature, even seeming to double on a seasonal basis ("gemination"). On balance, he favored the view that they were natural waterways, although he never opposed the suggestion that they might have been intelligently constructed. To begin with, he got little encouragement from the astronomical community. Observers of the caliber of Asaph Hall, who first glimpsed the two tiny martian moons, and Edward Barnard, discoverer of Amalthea, a faint inner satellite of Jupiter, never saw linear markings on the Red Planet. In 1894, Barnard wrote:

I have been watching and drawing the surface of Mars. It is wonderfully full of detail. There is certainly no question about there being mountains and plateaus. To save my soul I can't believe in the canals as Schiaparelli draws them. I see details where he has drawn none. I see details where some of his canals are, but they are not straight lines at all. When best seen these details are very irregular and broken up ... I verily believe ... that the canals ... are a fallacy and that they will so be proved before many favorable oppositions are past.

Barnard's skeptical stance represented the majority position of professionals throughout the period of the canal debate. Yet, enough reputable astronomers did verify Schiaparelli's canali to keep the controversy alive. Moreover, such was Schiaparelli's reputation as a skilled observer that, even among opponents, his claims concerning the mysterious lines were treated with respect and Mars became the subject of intense scrutiny at the world's leading observatories.

Several matters needed resolving, both intellectually and optically. First was the question of whether there really were lines on Mars at all. Many astronomers doubted it, suspecting they were an illusion, but verification of Schiaparelli's markings came, in 1886, from Perrotin and Thollon at Nice and Wilson in Cincinnati. Next was the question of whether, if the lines were real, they were water courses or some other phenomenon such as glacial crevasses or "stripes . . . due to differences in vegetation." The last suggestion was made by William Pickering in 1888 and won considerable support. Finally, came the question of whether, if the canals were waterways, they were natural or artificial. Although the latter view won very little support among professional astronomers, it proved irresistible to the general public whose imagination was fired by the pro-canal writings of Camille Flammarion in France and especially of Percival Lowell in the United States. In his widely read and translated La Planète Mars (1892), Flammarion wrote:

[I]t would be wrong to deny that [Mars] could be inhabited by human species whose intelligence and methods of action could be far superior to our own. Neither can we deny that they could have straightened the original rivers and built a system of canals with the idea of producing a planet-wide circulation system.

Even Flammarion's enthusiasm, however, paled beside that of Lowell who, from 1894 to his death in 1916, painted a picture of an extant martian civilization infinitely more alluring than the prosaic (yet more accurate) portrayals by mainstream science (see life on Mars).

Lowell managed to capture the mood of the age. By the closing decades of the nineteenth century, through a bombardment of extraordinary fact and fiction (see Verne, Jules), people had become habitualized to high-speed technological progress and increasingly ambitious civil engineering schemes. So the suggestion that beings on another world, more evolved than mankind, might be able to carry out projects on a planet-wide scale seemed perfectly credible. What humans could do, perhaps the Martians, older and wiser, could do bigger and better. Regarding transport systems, for instance, the year 1869 saw not only the term canali first applied (by Secchi) to a feature on Mars, but also the opening of the Suez Canal and the completion of the first rail-track linking the East and West coasts of the United States. Ordinary folk were primed ready to believe in advanced Martians, so that when Lowell speculated about a canal-building super-race, he found an eager and sympathetic audience.

Many people felt the haunting, other-worldy allure of the martian canals and novelists were not slow to weave romantic tales around the theme, further stimulating public interest. Percy Greg, George Griffith, Garrett Serviss, H. G. Wells (most influentially), and others at the end of the 19th century, Edgar Rice Burroughs in the early decades of the 20th, and, more recently, Robert Heinlein in Red Planet (1949)2 and Stranger in a Strange Land (1961)3 and Ray Bradbury in The Martian Chronicles (1950)1 drew inspiration from the Lowellian myth. For myth, is what it proved to be. By the dawn of the twentieth century, it was becoming clear that the martian atmosphere was too thin (see atmosphere of Mars), the temperature too low, and water too sparse, to support any kind of life except possibly primitive vegetation (see vegetation on Mars) and microbes. Hopes of finding canals or their builders had all but disappeared.4

Canali is a term first used by Pietro Secchi, and later adopted by Schiaparelli and others, to describe certain features claimed to have been observed on the surface of Mars. Canali can be correctly translated from the Italian either as "channels" or "canals." Schiaparelli generally intended and preferred the former and, indeed, often used an alternative description, fiumi (rivers) for the same features. Almost inevitably, however, canali was usually translated into English as "canals", implying an artificial origin.

The purported "gemination" of martian canals was a phenomenon first noted and named (from the Italian geminazzione = "to become doubled") by Schiaparelli in 1879. In observing the canal he had named Nilus, stretching between Lunae Lacus and Ceraunius, he saw "... two tracks regular, uniform in appearance, and exactly parallel ..." By 1882, he had charted as many as 20 geminations. Observers such as Perrotin, Pickering, and Lowell provided confirmation, though by the early 1890s the consensus was growing that the geminations could be explained as an optical or psychological effect.

The term "oases" was used by Lowell in 1895 to describe dark, round features on the surface of Mars which he claimed lay at the major intersections of a Martian canal network. These features had been referred to as "lakes" by William Pickering in 1892. Lowell, however, believed they were extensive regions of vegetation irrigated by canal-borne polar meltwater. They were an important feature of his theory concerning an extant Martian civilization.