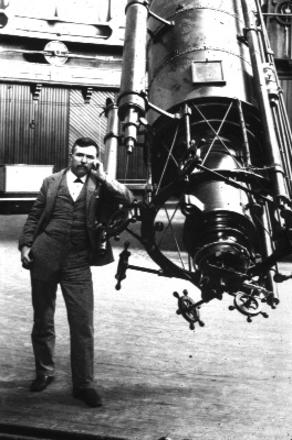 Edward Barnard was one of the greatest observational astronomers of his time, and discoverer of Jupiter's moon Amalthea (the last satellite to be found without photographic aid) and the nearby star that now bears his name (see Barnard's Star). Born into poverty in Nashville, Tennessee, Barnard began work in a photographic studio when he was only nine. He became a brilliant amateur astronomer, discovering 10 comets before the age of 30. During the 1880s, a wealthy patron of astronomy in Rochester, New York, awarded $200 each time a new comet was found so that Barnard soon earned enough to build a "comet house" for his bride. His discoveries and brilliance as an observer drew the attention of other amateur astronomers in Nashville who raised enough money for Barnard to attend Vanderbilt University.

In 1887, Barnard joined the staff of Lick Observatory and used the new 36-in Lick refractor to discover Amalthea and the first comet to be found by photography, both in 1892. In 1895 he moved to the University of Chicago's not-yet-completed Yerkes Observatory and helped test the great 40-in refractor following its installation. On May 29, 1897, Barnard narrowly escaped death when, just hours after he had left the observatory's dome, the 37-ton elevating floor, used to lift observers to the level of the telescope's eyepiece, collapsed after a supporting cable broke.

Barnard spent 28 years as an astronomer at Yerkes using the giant refractor as well as the 10-in Bruce wide-field telescope, built specially for him, to measure star positions and to pioneer wide-field photography for studying the structure of the Milky Way. He discovered the star, subsequently named after him, with the largest known proper motion, and numerous dark clouds and globules. His Photographic Atlas of Selected Regions of the Milky Way, published posthumously in 1927, identifies 349 dark nebulae north of declination -35° that are still known by their Barnard (B) numbers. Barnard played a prominent role, at the turn of the 20th century, in denouncing the existence of martian canals and insisting that they could be broken down into more diffuse detail.