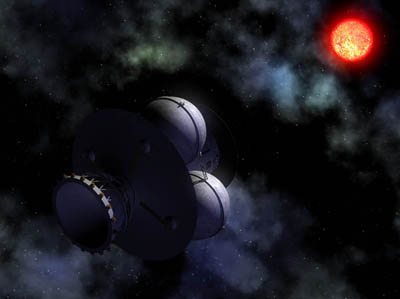 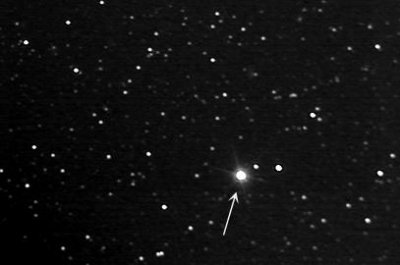 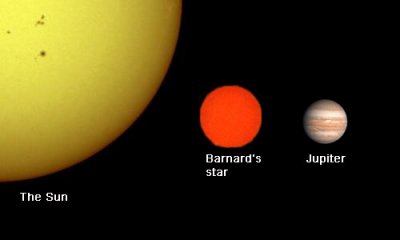 Relative sizes of the Sun, Barnard's Star, and Jupiter.

At a distance of 5.96 light-years (1.83 pc), Barnard's Star is the fourth nearest star and the second nearest star system to the Sun, after the trinary system of Alpha Centauri. Barnard's Star lies in the northernmost part of the constellation Ophiuchus, west of Cebelrai (Beta Ophiuchi), and was discovered in 1916 by Edward E. Barnard. Being a red dwarf, it cannot be seen from Earth without the aid of a powerful telescope.

Barnard's Star appears to be old, with an age of 11 to 12 billion years (about twice that of the Sun), and probably a member of the Milky Way's thick-disk population (see disk star). Small periodic variations in the star's light suggest it rotates slowly, only once every 130 days. When young and middle-aged, red dwarfs often spin fast enough to generate strong magnetic fields, which cause flares that can double the star's brightness in just a few seconds (see flare star). Barnard's Star was thought to be too old to display such activity. However, on Jul 17, 1998, Diane Paulson of NASA's Goddard Space Flight Center and her colleagues reported that Barnard's Star unleashed just such a flare. At the time, William Cochran of the University of Texas at Austin was using the McDonald Observatory's 2.7-m telescope to obtain the star's spectrum. He had been hoping to detect changes that would indicate the presence of orbiting planets. Instead, he noticed emission lines in the spectrum that showed the star might be flaring. But because he was interested in planets rather than flares, he did not pursue the matter further. Four years later, Cochran showed the spectra to Paulson, then a graduate student in Austin. Her team's analysis indicated that despite the star's old age, its hot blue flare resembled those from younger red dwarfs. The flare's temperature was at least 8,000 K, more than double the star's temperature of 3,100 K.


a search for planets

Barnard's Star is approaching us at the unusually high rate of 108 km/s (67 mi/s), so that every century its distance decreases by 0.036 light-years. By AD 11,800, at its point of closest approach, it will be just 3.85 light-years (1.18 pc) from the Sun. Barnard's Star is also distinguished by having the largest proper motion of any star (about 10.4 arcsec per year, or the equivalent of a lunar diameter every 180 years). This, and its proximity, make it an ideal candidate for searches for exoplanets, since any systematic wobbles in its movement across the sky caused by orbiting worlds would be relatively large. However, no planets around Barnard's Star have so far been confirmed – the claim by van der Kamp of two Jupiter-class worlds having been rejected. It now seems certain that if Barnard's Star does have any planets, they are sub-jovian in mass. If put in place of the Sun, Barnard's Star would appear from Earth only 100 times brighter than the full Moon and be such a feeble source of heat that our atmosphere would freeze out. Being an old disk star, it formed before the Galaxy became enriched with heavy elements. Yet although it is already old compared with our sun, it will shine for at least another 40 billion years before cooling to become a black dwarf. Barnard's Star was chosen as the hypothetical target of Project Daedalus.