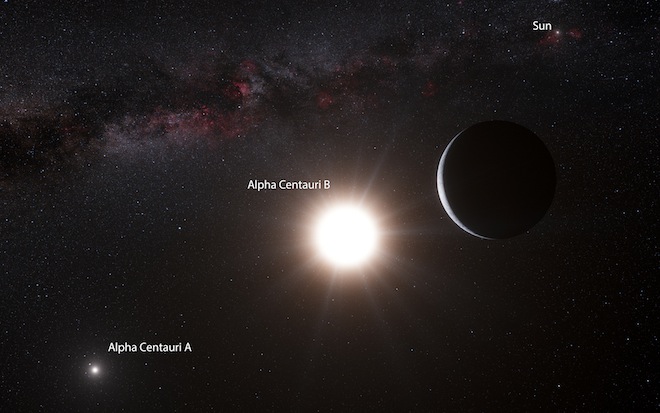 Artist's impression of the newfound planet in orbit around Alpha Cen B. 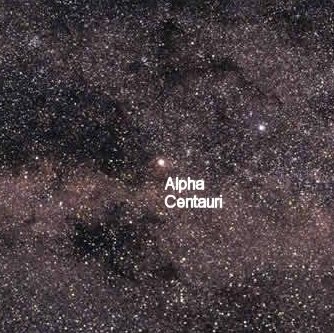 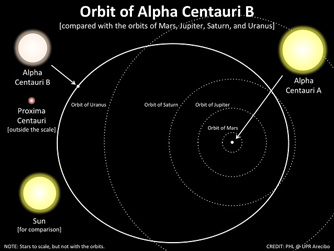 The orbit of Alpha Centauri B shown to scale.

Alpha Centauri and the Sun compared in size. 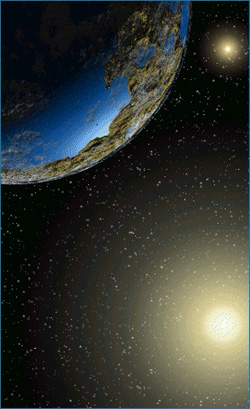 An artist's concept of a habitable Earthlike planet in the Alpha Centauri system. Image by Mark Fisher.

Alpha Centauri is the nearest star system to the Sun. Alpha Centauri (known to navigators as "Rigel Kent") lies at a distance of 4.37 light-years (1.34 pc) in the constellation Centaurus. On Oct 16, 2012, the discovery of a planet in the Alpha Centauri system was announced but its existence is now doubted.

Alpha Centauri consists of two reasonably Sun-like stars orbiting closely about each other and possibly a third, red dwarf star, much further out. The two brightest components, A and B, revolve around each other once every 80 years and are separated by about 25 astronomical units (3.75 billion km, or 2.3 billion miles).

Alpha Centauri A is a yellow G star similar to the Sun but about 1.5 times as bright; B is a smaller, orange K star with about half the Sun's luminosity. The third possible member of the system, Proxima Centauri, is a red dwarf, about 7,000 times fainter than the Sun, which, if it is truly associated with the main pair, moves in a very wide orbit with a period of millions of years.

Discovery of a planet around Alpha Centauri B

The discovery was announced on Oct 16, 2012, of a planet almost identical to the Earth in mass in orbit around Alpha Centauri B. This stunning breakthrough of a rocky, Earth-sized world on our doorstep came as a result of careful measurements of the position of the star three times a night, almost every night for more than three years using the HARPS instrument (High Accuracy Radial Velocity Planet Searcher spectrograph) attached to the European Southern Observatory's 3.6-m telescope at La Silla, Chile.[1]

Unfortunately, Alpha Cen Ba offers no hope of being inhabited because, at a distance of only 3.6 million miles (6 million km), it is much closer to its home star than Mercury is to the Sun, so that its surface must be intensely hot (around 2,200°F) and barren. Its orbital period is a mere 3.2 days. However, its very existence will spur the search for other worlds in the Alpha Centauri system and will further motivate those engage in SETI and the design of spacecraft capable of fast interstellar travel.


Speculation about planets in the Alpha Centauri system

There had long been speculation about whether any of the stars in the Alpha Centauri system had planets and, if so, how a planet would have to move in order to have the best chance of supporting life.[2, 3, 4] If it circled widely around either A or B, it would not only lie outside the habitable zone (where liquid water can exist on a planet's surface) of either of these stars but be subject to complex gravitational influences which would tend to destabilize its orbit. An even wider path, on the other hand, that took a planet around both main stars, might be stable but would fall even further outside the habitable zones.

The best chance for life (as we know it) might be on a world which circled closely around A or B and enjoyed similar levels of light and warmth to those on Earth. To an inhabitant of such a world, the other star would appear about 1,000 times brighter in the sky than our Moon and be visible for half the year in the daytime and half the year at night. A and B would make a striking color contrast of orange and yellow, while Proxima would appear as a dim red point of light barely visible without a telescope.

In 2008 a team of researchers led by astronomers at the University of California, Santa Cruz, completed a study which suggests that rocky planets similar to Earth may exist in the Alpha Centauri system and could be detected using existing techniques. Javiera Guedes used computer simulations of planet formation to show that terrestrial planets are likely to have formed around Alpha Centauri B and be orbiting in the habitable zone. The researchers then showed that such planets could be observed using a dedicated telescope.

Coauthor Gregory Laughlin, professor of astronomy and astrophysics at UCSC, said a number of factors converge to make Alpha Centauri B an excellent candidate for finding terrestrial planets. The Doppler detection method, which has revealed the majority of known extrasolar planets, measures shifts in the wavelength of light from a star to detect the tiny wobble induced by the gravitational tug of an orbiting planet. Factors that favor the use of this technique for Alpha Centauri B include the brightness of the star and its position in the sky, which gives it a long period of observability each year from the Southern Hemisphere.

Detecting small, rocky planets the size of Earth is challenging, however, because they induce a relatively small wobble in their host stars. According to Laughlin, five years of observations using a dedicated telescope would be needed to detect an Earth-like planet around Alpha Centauri B.

Coauthor Debra Fischer of San Francisco State University is leading an observational program to intensively monitor Alpha Centauri using the 1.5-m telescope at the Cerro Tololo Inter-American Observatory in Chile. The researchers hope to detect real planets similar to the ones that emerged in the computer simulations.

To study planet formation around Alpha Centauri B, the team ran repeated computer simulations, evolving the system for the equivalent of 200 million yr each time. Because of variations in the initial conditions, each simulation led to the formation of a different planetary system. In every case, however, a system of multiple planets evolved with at least one planet about the size of Earth. In many cases, the simulated planets had orbits lying within the habitable zone of the star. [Text adapted from UCSC press release.]

Alpha Centauri is mentioned in the Star Trek original series episodes "Tomorrow Is Yesterday" and "Metamorphosis." In the former, Kirk tells his captors that Alpha Centauri "is a beautiful place, you ought to see it." In the latter, Zephram Cochrane is said to be a native of this system. It is also mentioned by Geordi Laforge in the Next Generation episode "Elementary, Dear Data."