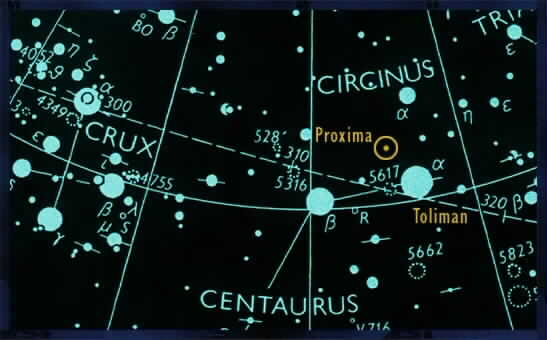 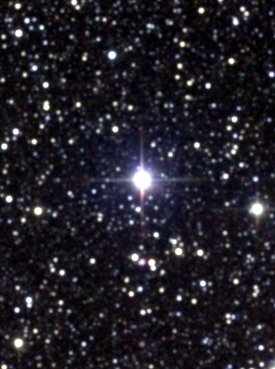 Proxima Centauri in infrared. Image by 2-Micron All Sky Survey.

Proxima Centauri (also known as Gliese 551) is the nearest star to the Sun, just 4.24 light-years away (268,000 AU or 40 trillion miles), but you can't see it without a telescope. That's because it's a red dwarf – a star that's much smaller, cooler, and fainter than the Sun – more than 10,000 times fainter. It's part of the Alpha Centauri system, going around the two main stars, A and B, in a huge orbit, at a distance of more than a fifth of a light-year, which that takes it more than half a million years to complete. Proxima Centauri was discovered in 1915 by Robert Innes.

Because of its nearness, both to the Sun and its Alpha Cen neighbors, Proxima has well-determined physical properties, including a mass of 0.11 solar masses, a radius of about 15% that of the Sun, and an age of 5 to 6 billion yr. Despite its considerable age, Proxima has an active chromosphere and is also a flare star (variable-star designation V645 Centauri), capable of brightening a magnitude or more in minutes. Observations of its chromosphere at ultraviolet wavelengths suggest a rotation period of about 31 days. Claims made in the mid-1990s, based on data from the Hubble Space Telescope, that Proxima may be orbited by a large planet or a brown dwarf, have not been substantiated.

Proxima has two known planets, Proxima Centauri b and c. The smaller of the two, b, is slightly larger than Earth and orbits within the so-called habitable zone of the star – the region in which water, a key ingredient for life, could remain liquid on its surface.

The larger planet, c, is a super-Earth or mini Neptune, 7 times as massive as Earth in an orbit that's about the same size as that of the orbit of Mars around the Sun. But because Proxima gives off so little heat compared with the Sun, the surface temperature of planet c must be very low, around -230 °C.

Planet c is almost certainly too cold to support life. But what about planet b, which is similar in size to Earth and receives much more light and heat from the central star? One of the problems is that Proxima Centauri, like many red dwarfs, is a flare star that sometimes sends out powerful bursts of radiation across the spectrum, from radio waves to X-rays. These energetic flares might pose a serious threat to life on any nearby planets.

In April 2019, the Parkes Radio Telescope in Australia was pointed at Proxima Centauri as part of a ten-year project called Breakthrough Listen, the goal of which is to search for radio signals that may have been sent out by intelligent extraterrestrials. In going through about 30 hours of data collected from the direction of Proxima, researchers found a narrowband signal, a single pure tone, at a frequency of 982 MHz that was picked up on five separate occasions. It showed a regular back and forth shift in frequency, due to the Doppler effect, consistent with the possibility that it came from a planet in orbit around a star.

The most likely explanation is that the signal is local in origin, due to some kind of terrestrial interference. But researchers haven't been able to confirm this, nor has the signal been seen again since. The fact that Proxima Centauri has an Earth-sized planet makes the remote possibility that it came from there intriguing. But we'll have to wait and see. In any event, the nearest star to the Sun – despite being a stellar minnow – is proving to be a far more interesting target for astronomers and astrobiologists than we ever expected.

In Murray Leinster's short story "Proxima Centauri," published in the March 1935 issue of Astounding Stories, a mile-wide starship, The Adastra, approaches the nearest star having made the first interstellar journey from Earth. The crew discover that Proxima is surrounded not only by planets but by a great glowing ring. Their colonization of the system is delayed by having first to deal with a race of intelligent plants.

In both Robert Heinlein's Orphans of the Sky (1963) and Harry Harrison's Captive Universe, generation ships head out for Proxima Centauri.