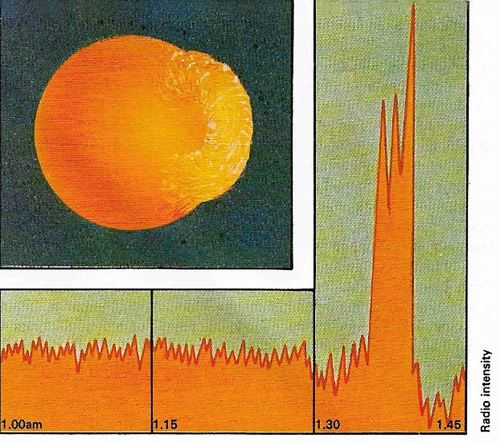 Flare stars, such as UV Ceti, alone among variable stars, change in brilliancy so quickly that they can be watched as their luminosity increases over a period of minutes. The sudden increases are due to flare activity.

A flare star is a red dwarf that displays sudden and unpredictable changes in light output lasting for a few minutes to a few hours. The flares are believed to occur in the star's chromosphere and to be similar in nature to solar flares but much more energetic. They occur irregularly, follow no predictable pattern, and can dramatically increase the star's brightness over a broad wavelength range from X-rays to radio waves.

The nearest star to the Sun, Proxima Centauri, is a flare star as is Wolf 359 and one of the components of the nearby binary star system, Luyten 726-8, also known as UV Ceti. Indeed, it may be that the majority of red dwarfs are flare stars.

The intense emission of X-rays during flare activity on red dwarfs raises the question of whether life would possible on worlds orbiting such stars. There are potential obstacles, in any case, to life around red dwarfs, including the relatively narrow habitable zones, the likelihood of orbiting planets being in gravitational, and the redness of the light which might be an obstacle to photosynthesis. However, the fact that flares on red dwarfs may unleash up to 10,000 times as many X-rays as a typical solar flare poses a special problem to the survival of life as we know it.