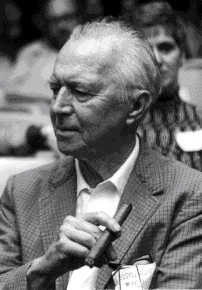 Murray Leinster was an American writer and inventor (real name William Fitzgerald Jenkins) who is sometimes referred to as the 'Dean of science fiction.' Leinster contributed regularly to Argosy as early as 1916, but his first significant work was "The Runaway Skyscraper" (1919) in which a side effect of a geologic fault is to send the Metropolitan Insurance Building and its occupants backward in time from Madison Square, Manhattan, to primitive America.

Leinster won the Liberty Award in 1937 for "A Very Nice Family", the 1956 Hugo Award for his novellete "Exploration Team", and a retro-Hugo Award in 1996 for "First Contact" (1945), which was also voted into the Science Fiction Hall of Fame. In "First Contact" a spacecraft from Earth encounters a ship of humanoid aliens near the Crab Nebula. A dilemma arises in that if either spaceship captain gives the order to flee, he risks the discovery – and thus the possible destruction – of his home planet. This story was a significant milestone in science fiction because, even more so than in Stanley Weinbaum's "A Martian Odyssey", the alien is presented as being on a human level in terms of both intelligence and morality. Leinster shatters the Wellsian stereotype of extraterrestrials bent on the destruction or subjugation of Earth and its inhabitants.

Leinster's novel Sidewise In Time (1934) is notable for being one of the earliest parallel worlds and alternate histories tale. In 1945, in A Logic Named Joe, he anticipates the Internet. Leinster is also credited with inventing the back-projector special effect for motion pictures, perhaps the earliest virtual-reality device.