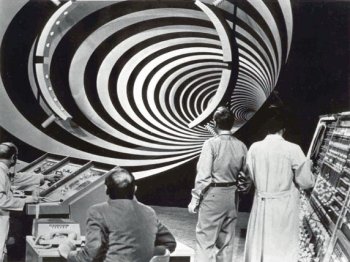 Scene from the TV series The Time Tunnel.

Can we travel through time? Of course, we do it all the time! But can we do it at a different rate than normal? Again, the answer is "yes" because of the phenomenon known as time dilation in Einstein's relativity theory. However, time dilation enables, even in principle, only a limited kind of leap into the future – one from which we cannot return to the present. By genuine time travel is meant the ability to jump forward or backward through time at a rate other than that of the ordinary progression of events or that enabled by the relativistic time dilation effect.

The possibility of traveling through time poses such a threat to causality and opens the door to so many disturbing paradoxes that many scientists feel inclined to dismiss it out of hand. However, it has been a favorite theme of science fiction since the 1880s. In The Time Machine (1895), H. G. Wells gives a pleasant preamble about the nature of the fourth dimension before whisking his hero 802,000 yr into the future. Says the Time Traveller (we never learn his real name), "[A]ny real body must have extension in four directions: it must have Length, Breadth, Thickness, and-Duration. There are really four dimensions, three of which we call the three planes of Space, and a fourth, Time. There is, however, a tendency to draw an unreal distinction between the former three dimensions and the latter, because it happens that our consciousness moves intermittently in one direction along the latter from the beginning to the end of our lives."

Unfortunately for would-be chrononauts (an early version of The Time Machine was called "The Chronic Astronauts"), Wells is not specific about how his time traveling device works, though we know that "Parts were of nickel, parts of ivory, parts had certainly been filed or sawn out of rock crystal." In more recent times, physicists, speculating on some of the more esoteric byways of relativity and quantum mechanics, have been a little more forthcoming about how time travel might be achieved in practice. These speculations have variously involved wormholes (shortcuts outside of normal space and time), faster-than-light particles known as tachyons, and unusual cosmological models, such as the Gödel universe, which allow movement to any point in the future or the past (see time machine.) Let us leave aside the practical aspects, however, and focus on the logic of breaking the time barrier.

The various time travel possibilities dealt with in science fiction fall into two broad categories. In the first the time-line, from deepest past to darkest future, is frozen and immutable, like a film-strip. Any time-traveling that takes place is constrained by this preordained structure – effectively, already written into the narrative of the world (the "block universe" of Einsteinian physics) – and is thus prevented from leading to paradoxes. In one variant of this scenario, the so-called Novikov self-consistency principle applies. Named after Igor Novikov, an astrophysicist at Copenhagen University, this asserts that any attempt at time travel that would lead to a paradox, such as the Grandfather Paradox, is bound to fail even if the cause of failure is an extremely improbable event. In other words, try as you might to introduce a contradiction into the time-line, like killing yourself or one of your ancestors in the past, circumstances will always conspire to prevent you. An excellent example of this type of universe is found in Robert L. Forward's novel Timemaster. Another variant on the fixed time-line concept is that any event that appears to have caused a paradox has, in fact, created a new time-line. The old time-line remains unaltered, and the time traveler becomes part of a new temporal branch line. One difficulty with this arrangement is that it might violate the principle of conservation of mass-energy, unless the mechanics of time travel demand that mass-energy be exchanged in precise balance between past and future at the moment of travel. However, the concept of branching universes and alternative histories is not outrageous in physics where the many worlds hypothesis and of Feynmann's sum-over-histories are routinely debated.

The second main type of time travel entertained in science fiction assumes that the time-line is flexible and changeable. This can lead to all sorts of mind-boggling difficulties and contradictions. A way to offset some of these problems is to stipulate that the time-line is very resistant to change. In the extreme case, as writer Larry Niven has argued, it may be a fundamental rule that in any universe where time travel is allowed, no actual time machine is ever invented. In 1991, The English physicist and mathematician Stephen Hawking put this idea on a more formal footing with his chronology protection conjecture. According to this, quantum effects will always conspire effectively to prevent time travel where classical physics, including the general theory of relativity, might otherwise allow time travel to occur. The chronology protection conjecture (CPC) states that solutions to the general theory that permit closed time-like paths are physically meaningless. Hawking quipped that CPC makes "the universe safe for historians" and provides one possible answer to the question "Where are the hordes of tourists from the future?"

On the other hand if the time-line is presumed to be easily changed, paradoxes threaten to spring up at every turn. One of the most remarkable of these is the closed causal curve paradox in which, it seems, something can be got for nothing. Samuel Mines summarized the plot of his 1946 short story as follows: "A scientist builds a time machine, goes 500 yr into the future. He finds a statue of himself commemorating the first time traveler. He brings it back to his own time and it is subsequently set up in his honor. You see the catch here? It had to be set up in his own time so that it would be there waiting for him when he went into the future to find it. He had to go into the future to bring it back so it could be set up in his own time. Somewhere a piece of the cycle is missing. When was the statue made?"

Closed loops in time can also conjure knowledge out of thin air. A man builds a time machine and travels into the past to give the plans for the device to his younger self who then builds the machine, travels into the past, and so on. Where did the plans originate? A curious thing about time loops is that they have no easily discernible future and past because all the events taking place in them affect one another in a circular way. Time loops also put a question mark over free will. What happens if the younger man, given the time machine plans by his older self, decides not to build the device? Can he make that choice given that, in some sense, he has already built it? Perhaps the apparent absence of time travelers and time machines in the real world is a sign that we do not have to worry about such issues – at least, for the present.