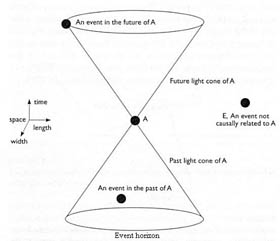 Causality is the principle that a precisely determined set of initial conditions will always result in the same effect at a later time. Causality was a basic tenet of classical physics which assumed, both physically and philosophically, that it would always be possible to establish the initial state of a system to any desired degree of accuracy. The impossibility of such a precise determination and the consequent breakdown of causality at the subatomic level is a fundamental result of quantum mechanics and, in particular, of the Heisenberg uncertainty principle.

In relativity theory one event can have a causal influence on another only if energy or information sent from the first reaches the second.

Causality on a large scale would be undermined should some means be found to (1) open a portal enabling matter to travel backward in time, or (2) send a message into the past, or, equivalently, at a speed faster than that of light. Just such a breakthrough was claimed in a paper in Physical Review Letters (May 22, 2000) based on the work of Anedio Ranfagni of the Italian National Research Council. See also time and time travel.

Because the speed of light is a maximum speed at which energy and information can be transmitted, events in the history of the universe can be organized in terms of their possible causal relations. To do this one indicates, for every pair of events, whether the first is in the causal future of the second, or vice versa, or whether there is no possible causal relation between them because no signal could have travelled between them. Such a complete description defines the causal structure of the universe.

A light cone is the surface in spacetime representing all possible paths of light which could arrive (from the past: past light cone) at or depart (to the future: future light cone) from a particular event (Fig 1). The future lightcone is a cone-shaped portion of spacetime containing all future locations at which light could arrive after having departed from a particular location within spacetime (the tip of the cone). Points inside the cone can be reached at the speed of light or slower and points on the surface only at the speed of light. Since nothing can travel faster than light, points outside the cone cannot in any way be affected by the tip.

According to Aristotle everything has four causes: the material cause, the material substance involved; the formal cause, its shape or structure; the efficient cause, the agency which imposes the shape upon the matter, and the final cause, the end to which it is done.

The Scottish philosopher David Hume held that causes and effects are not real, but instead are imagined by our minds to make sense of the observation that A often occurs together with or slightly before B. All we can actually observe are correlations, not causations. This is also expressed in the logical fallacy, "correlation implies causation." Kant, on the other hand, held that causality was one of the a priori categories necessary for the ordering of experience.