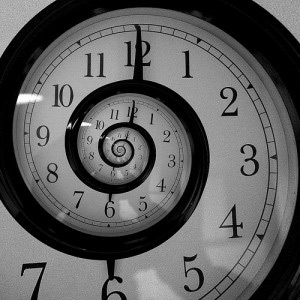 Time is one of the most familiar and yet mysterious properties of the universe. The "flow" of time is one of the strongest impressions we have, yet it may simply be an illusion or a product of the conscious mind. The very notion that time somehow moves leads to a logical paradox because, as the Australian philosopher J. J. C. Smart asked: "In what units is the rate of time flow to be measured? Seconds per __ ?"

Time can be measured astronomically with respect to the Sun, when it is known as solar time, or with respect to the stars, when it is known as sidereal time. Universal Time (or Greenwich Mean Time) is a world timekeeping standard used in astronomical observations. When carrying calculating orbital motions with the Solar System, however, astronomers switch to a system known as dynamical time.

John Dunne in his classic book An Experiment With Time, argued that the human mind has the ability to rove back and forth along the time-line so that precognition is a physical possibility. However his theory involves an infinite regress of time and of the observer that is philosophically hard to swallow. All the same, it may be that the apparent movement from past to present to future has less to do with the universe at large than it has to do with our individual subjective experience.

In some way, still to be fathomed, time, consciousness, free will, and the individual are intimately entwined.

In physics, by contrast, time is treated no differently (with one important exception, noted below) than space. It is simply another dimension – another axis, or extension, of physical reality. Just as the various spatial dimensions prevent everything from happening at a single point, so time prevents everything from happening all at once. As one wag put it, "Time is just one damned thing after another!"

In Einstein's relativity theory, time is effectively "spatialized" so that, instead of speaking of an absolute three-dimensional space and a separate one-dimensional time, there is a four-dimensional spacetime continuum. So closely related are time and space in relativity theory that time can be converted into space and vice versa. In particular, different observers may not agree on the distance or the duration between any two events in spacetime, but they will always agree on the spacetime interval. If the two points events occur at (t, x, y, z) and (t + dt, x + dx, y + dy, z + dz), then the (constant) spacetime interval between them is given by

But the time of relativity, like that of classical physics, remains reversible.