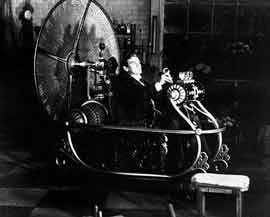 A time machine is a hypothetical device that is able to travel through time – into the past and/or the future. Alternatively, a region of spacetime that permits closed time-like curves, i.e. also known as a chronology-violating spacetime. Examples of possible time machines include a Godel universe, a van Stokum cylinder, a Gott loop, the Alcubierre warp drive, a rotating black hole, and a traversable wormhole both of whose mouths lie in the same universe. A well-known fictional time machine is the TARDIS.

The Time Traveler (for so it will be convenient to speak of him) was expounding a recondite matter to us. His pale gray eyes shone and twinkled, and his usually pale face was flushed and animated. The fire burnt brightly, and the soft radiance of the incandescent lights in the lilies of silver caught the bubbles that flashed and passed in our glasses.

So begins The Time Machine, the first and most inspired science fiction novel of Herbert George Wells, published in the summer of 1895. A handful of other time traveling yarns had been penned earlier, but this was the first by a master story-teller, mindful of both the scientific and social undercurrents of his age.

Well's fantasy had started life in 1888 as a serialization in The Science Schools Journal under the disastrous title "The Chronic Argonauts". However, it was so clumsily written that the 22-year-old Wells broke it off after just three installments and later destroyed every copy he could find. A completely reworked version was serialized in The New Review in 1894 as "The Time Traveler's Story" and the next year it came out in the form that made Wells a household name.

Wells had always had a leaning toward science and, after a chaotic early education, had been lucky enough to come under the tutelage of Thomas Huxley at the Normal School of Science in London. But his greatest passion was for commenting on social and political issues. The Time Machine was no more than a vehicle for Wells to put forward a cautionary vision of society's future. he certainly never intended his ideas about the nature of time to be taken too seriously.

Yet, twenty years later, the Time Traveler's opening remarks could have been quoted in any respectable physics textbook. Time is a fourth dimension, he explains. An instantaneous cube cannot exist. The cube we see, moment by moment, is just a cross section of a four-dimensional entity having length, breadth, width, and duration. "There is no difference," says the Time Traveler, "between Time and any of the three dimensions of Space except that our consciousness moves along it."

Even if Wells had secretly built a time machine of his own he could hardly have been more prescient. Leaping forward a decade or more he would have found Albert Einstein and the Lithuanian-born mathematician Hermann Minkowski painting exactly the same kind of physical picture he presented in Chapter One of The Time Machine. It was Minkowski who formally introduced the idea of worldlines as the unique tracks that objects (and people) make through spacetime. But the Time Traveler had already given an eloquent description of them, ten years before anyone had heard of spacetime or relativity:

For instance, here is a portrait of a man at eight years old, another at fifteen, another at seventeen, and other at twenty-three, and so on. All these are evidently sections as it were, Three-Dimensional representations of his Four-Dimensional being, which is a fixed and unalterable thing.

If we could somehow look down from a higher dimension, we would see ourselves as four-dimensional creatures, like strange, sessile worms that lie draped across the unchanging spacetime landscape of the world. Time is another dimension, like the dimensions of space. But it seems different, because whereas we have freedom to move more or less as we please in any of the three spatial dimensions, time is frustratingly restrictive. Time travelers we may all be, but only in the least interesting sense of moving en masse at a predetermined rate from cradle to grave.

The Time Traveler claims to have found a way out of this communal time stream. As evidence, he sends a tiny scale model of his machine hurtling into the past or the future (he cannot be certain which) under the noses of his incredulous guests. A week later, he becomes the first human time traveler, journeying forward on his full-size machine to the year 802,702.

What he finds, however, is crushingly disappointing. he had expected to see great scientific marvels and social advances. But, instead, eight thousand centuries on, the gap between the have's and the have-not's, already so worryingly evident in Wells's Victorian England, has become an unbridgeable chasm. mankind has split into two totally distinct species: the surface-dwelling Eloi, weak and childlike, and the horrific, subterranean Morlocks, who fatten up and feed upon their distant cousins.

The Time Traveler returns to tell the tale, even offering a wilted flower of an unknown species as material proof. But, we might ask, does his account of the future now necessarily have to come true? Forewarned, could mankind set itself on a different course in the centuries ahead? And if so, how could it have been (excuse the confusion of tenses!) that the Time Traveler encountered the Eloi and the Morlocks? Conversely, if the future were predetermined, what of free will?

More concerned as he is with the social dimensions of his story, Wells only hints at some of the extraordinary puzzles and paradoxes that time travel throws up. But there is enough to whet the appetite. Following the disappearance of the miniature time machine, a discussion ensues between the Time Traveler and his guests over where the model has gone:

After an interval the Psychologist had an inspiration. "it must have gone into the past if it has gone anywhere," he said.
"Why?" said the Time Traveler.
"Because I presume that it has not moved in space, and if it traveled into the future it would still be here all this time, since it must have traveled through time."
"But," said I, "if it traveled into the past it would have been visible when we first came into this room; and last Thursday when we were here; and the Thursday before that; and so forth!"

The TARDIS is the time machine utilized by the Doctor in the BBC cult television series Dr. Who. TARDIS is an acronym for "Time and Relative Dimensions in Space." The Doctor's rather unreliable type 40 TARDIS appears as a blue 1950s-style police box – but only because the chameleon circuit that allows the TARDIS to appear in any form got jammed on Earth in 1963. The internal size of the TARDIS bears no resemblance to its external dimensions. In fact, the TARDIS contains libraries, gardens, swimming pools, and even a cricket pavilion, plus two control rooms, a boot cupboard, a very large costume wardrobe and a pink Zero Room.