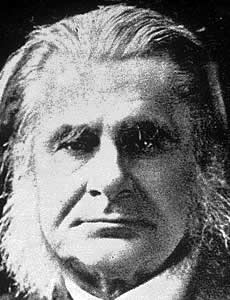 Thomas Huxley was an English biologist who became the foremost expounder of Darwinism of his time and a pioneer of the modern idea that life evolved from non-living matter; he coined the term abiogenesis.

Thomas Huxley was born in London and embarked upon a medical career. After qualifying at Charing Cross Hospital, he joined the Royal Navy and, in 1846, was appointed assistant-surgeon aboard HMS Rattlesnake. The ship had been commissioned to survey areas of the Great Barrier Reef and the neighboring sea. This gave Huxley ample opportunity to study animal life and was the start of his biological career. The voyage lasted four years during which time he gathered much information on the free-swimming animals of the plankton. He published an important work on the structure and classification of coelenterates (jellyfish and their relatives) which showed clearly how they are built of two basic layers. After the voyage he continued to publish material that he had collected, including papers on sea squirts and pteropods (sea butterflies).

On his return from the Rattlesnake's voyage Huxley was made a Fellow of the Royal Society in recognition of his scientific work. In 1854 he was appointed a lecturer in natural history at the Royal School of Mines, and later as a naturalist to the Geological Survey. Although he continued to publish papers concerning coelenterates and other invertebrates. Fossil fish and reptiles were the subject of a number of papers published in the late 1850s and in 1858 Huxley lectured on the origins of the vertebrate skull.

For some time Huxley and his contemporaries had been discussing the possibility that animal species had evolved, one from another. No satisfactory theories had been put forward but, in 1859, Charles Darwin's Origin of Species appeared. Huxley at once realized its importance and how the theory of natural selection provided the "working hypothesis we sought". For the rest of his life, Huxley strove to ensure the full recognition of Huxley's work. He naturally met with opposition from the Church and many non-scientists who believed humans to be unique.

In 1863 Huxley published Man's Place in Nature in which he compared humans and the great apes. He clearly showed the similarities and related them to the remains of Neanderthal man that had been found some years earlier. The value of fossils to the new theory of evolution inspired many papers on fossils during the 1860s. Huxley also produced a number of educational books during this period, including Manual of Comparative Anatomy of Vertebrated Animals (1871) and Evolution and Ethics (1893).


Huxley and the origin of life

Huxley's Edinburgh lecture "On the Physical Basis of Life," in 1868, can be seen as the starting point for the scientific debate about the chemical origin of life and the final denunciation of vitalism. Pointing out that protoplasm (which he considered to be the fundamental substance of life) was made principally from the elements carbon, hydrogen, oxygen, and nitrogen, which were combined into water, carbonic acid, and nitrogen compounds, he said:

These new compounds, like the elementary bodies of which they are composed, are lifeless. But when they are brought together, under certain conditions, they give rise to the still more complex body, protoplasm, and this protoplasm exhibits the phenomenon of life. I see no break in this series of steps in molecular complication.

His line of reasoning was soon taken up by Tyndall and others. Huxley's tutelage of H. G. Wells played a significant part in the young writer's preoccupation with aspects and extrapolations of evolutionary theory in his early science fiction novels, including The War of the Worlds.

From about 1870, Huxley was too involved in other things to continue actual research. He had always been interested in education and held a number of appointments in this field. He pioneered the teaching of biology and his method of selecting "type animals" is still followed today. Many of his writings are to be found collected under the title Science and Education which appeared in 1899. He was, for a time. secretary of the Royal Society and he also sat on various Royal Commissions inquiring into scientific and educational problems.

Thomas Huxley retired from his appointments in 1885 and spent the last ten years of his life writing essays on philosophical, biological, and other subjects – a tradition carried on by his grandson Julian Huxley.

Thomas Huxley's son Leonard Huxley (1860–1933), a distinguished man of literature, wrote The Life and Letters of Thomas Henry Huxley (1900). Of Leonard's children, three earned fame. Julian Sorell Huxley (1887–1975) is best known as a biologist and ecologist. His early interests were in development and growth, genetics and embryology. Later he made important studies of bird behavior, studied evolution, and wrote many popular scientific books. He served as secretary of the Zoological Society of London (1935–1948) and as director general of the United Nations Educational, scientific, and Cultural Organization (UNESCO) (1946–1948). His books include The Individual and the Animal Kingdom (1911) and Evolutionary Ethics (1943). Aldous Leonard Huxley (1894–1963) was one of the 20th century's foremost novelists. Andrew Fielding Huxley (1917–2012) shared the 1963 Nobel Prize in Physiology and Medicine with Alan L. Hodgkin and John Eccles for his work with Hodgkin on the chemical basis of nerve impulse transmission.

"The known is finite, the unknown is infinite; intellectually we stand on an islet in the midst of an illimitable ocean of inexplicability. Our business in every generation is to reclaim a little more land."

"I am too much of a skeptic to deny the possibility of anything."

"The great tragedy of Science: the slaying of a beautiful hypothesis by an ugly fact."