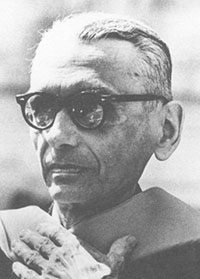 Kurt Gödel was an Austrian-American mathematician and logician who, in 1931, proved that within a formal system questions exist that are neither provable nor disprovable on the basis of the axioms that define the system. This is known as Gödel's undecidability theorem. He also showed that in a sufficiently rich formal system in which decidability of all questions is required, there will be contradictory statements. This is called Gödel's incompleteness theorem. In establishing these theorems Gödel showed that there are problems that can't be solved by any set of rules or procedures; instead, for these problems one must always extend the set of axioms. This disproved a common belief at the time that the different branches of mathematics could be integrated and placed on a single logical foundation.

Gödel was a close friend of Albert Einstein at the Institute for Advanced Study, Princeton, from 1953 to his death, and contributed to general relativity theory and cosmology.

The Gödel universe is a hypothetical universe, derived from the equations of the general theory of relativity, that admits time travel into the past; it is infinite, static (not expanding), rotating, with non-zero cosmological constant. Gödel, one of the first scientists to be intrigued by the possible physical basis of time travel, theorized the existence of such a universe in a brief paper written in 1949 for a Festschrift to honor Einstein. The Gödel universe was the first example of what is called a chronology-violating spacetime, i.e. a spacetime that admits closed time-like paths.

Although largely ignored, Gödel's paper raised the question: if one can travel through time, how can time as we know it exist in these other universes, since the past is always present? Gödel added a philosophical argument that demonstrates, by what have become known as Gödel's lights, that as a consequence, time does not exist in our world either. Without committing himself to Gödel's philosophical interpretation of his discovery, Einstein acknowledged that his friend had made an important contribution to the theory of relativity – a contribution that he admitted raised new and disturbing questions about what remains of time in his own theory.

Physicists since Einstein have tried without success to find an error in Gödel's physics or a missing element in relativity itself that would rule out the applicability of Gödel's results. In the 1949 paper, Gödel introduced the now-famous grandfather paradox.